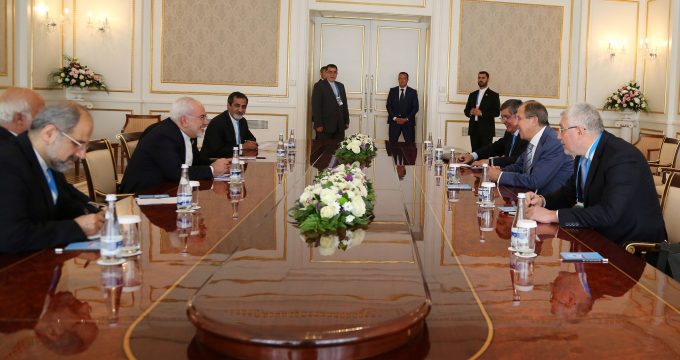 The talks were mainly focused on the ways to foster bilateral and multilateral cooperation, regional developments and expanding ties within the SCO.

Zarif is also slated to hold talks with Afghan President Ashraf Ghani on the sideline of the conference.

The Shanghai Cooperation Organization conference opened in Tashkent on Friday with participation of Zarif.

Zarif who leads the Iranian delegation is to address the gathering.

Iran has currently an observer status in the SCO but is expected to gain full membership as a result of the ongoing SCO conference.

Zarif arrived in Uzbekistan from the Netherlands Friday morning, wrapping up his two-day official visit there.

The sanctions on Iran over the nuclear dispute with Washington were one of main obstacles in the way of Tehran’s full membership in the SCO.

The Shanghai Cooperation Organization (SCO) is a Eurasian political, economic, and military organization which was founded in 2001 in Shanghai by the leaders of China, Kazakhstan, Kyrgyzstan, Russia, Tajikistan, and Uzbekistan.

These countries, except for Uzbekistan, had been members of the Shanghai Five, founded in 1996; after the inclusion of Uzbekistan in 2001, the members renamed the organization.