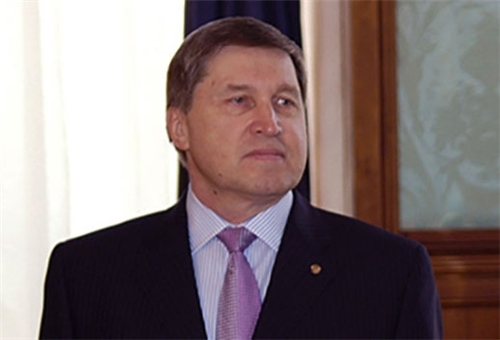 MOSCOW, June 22. /TASS/. Issues related to the possible membership of India, Pakistan and Iran in the Shanghai Cooperation Organization (SCO) will be discussed at the SCO summit due on June 23-24 that will be attended by Russian President Vladimir Putin, Russian presidential aide Yuri Ushakov told journalists on Wednesday.

As for Iran’s possible membership in the Organization, Ushakov said that the Kremlin sees no reason not to satisfy Iran’s bid.

“The issue of Iran’s request for admission to SCO will, obviously, be also discussed by the leaders behind closed doors,” he said.

Ushakov recalled that Iran had submitted an application for entry to SCO back in April 2008.

“After the UN sanctions on Iran were lifted, we, the Russian side, believe that there are no reasons whatsoever not to admit the country to the organization,” Ushakov said.

Meetings at the summit

According to Ushakov,  Putin will hold brief meetings on June 23-24 with Uzbekistan’s President Islam Karimov and China’s President Xi Jinping and will take part in trilateral talks of the leaders of Russia, China and Mongolia.

“Our president will hold a meeting [on June 23] in a trilateral format with China’s chairman and the president of Mongolia,” Ushakov said, adding this would be the third meeting in this format.

The first trilateral talks were held also on the sidelines of the SCO summit in Dushanbe in 2014 and in Ufa in 2015. “We believe it is already becoming a tradition that needs to be continued in the future to hold Russia-China-Mongolia meetings linked to SCO summits,” the Kremlin aide said, adding Russia’s partners shared this approach.

According to the presidential aide, the meeting in Tashkent is expected to discuss further development of the relations between the three countries and sign some documents, including the program of an economic corridor between Russia, China and Mongolia, which integrates about 30 projects.

The meeting is also set to approve an inter-governmental agreement on international carriages across the network of Asian motorways and an inter-governmental agreement on the mutual recognition of customs control for specific types of goods. The presidential aide didn’t rule out that the meeting might raise other issues of regional and international nature.

Also, a brief meeting between President Putin and his Chinese counterpart Xi Jinping will take place on June 23, the presidential aide said. On June 24, Putin will hold a meeting with the summit’s host, President of Uzbekistan Islam Karimov, the Kremlin aide said.

“The meeting will basically focus on the SCO issues and probably on some topical issues of bilateral cooperation,” Ushakov said.

Talks with the Indian PM

Ushakov went on to say that Putin will hold a meeting with Indian Prime Minister Narendra Modi within the framework of preparations for a Russian-Indian summit scheduled for October.

The meeting will focus on India’s application for membership in SCO, as well as certain “issues of bilateral relations, in particular, issues related to cooperation in the energy sector.”

For example, the sides will discuss the largest joint project – the construction of the Kudankulam nuclear power plant with Russia’s assistance. “The first power unit of the NPP is functioning at full capacity, the second power unit is at the stage of physical start-up, and the reactor is planned to reach the first criticality on July 25. Preparations for the construction of the NPP second stage (two more power units) are underway, and documents on the third stage are being coordinated”, Ushakov said.

He did not rule out that Putin and Modi will also discuss other issues at their talks.

The SCO summit in Tashkent

According to Ushakov, more than 10 documents are planned to be signed. “Eleven documents are ready for signing”, the Kremlin official said.

According to him, the summit is expected to discuss concrete steps to improve the activity of the SCO and develop cooperation in the priority spheres, such as security, counterterrorism, economic and humanitarian ties. In addition, the SCO states’ leaders intend to exchange views on key global and regional issues, including the situation in Afghanistan and in the Middle East.

Other subjects for discussion include trade-economic interaction issues. “Issues of harmonization of Eurasia’s integration projects, including the Eurasian Economic Union and the economic belt Silk Road, will be considered separately,” Ushakov said, adding that the summit participants would also discuss the involvement of the ASEAN countries in this partnership.

The next SCO summit will be tentatively held in Kazakhstan in June 2017.
By Tass