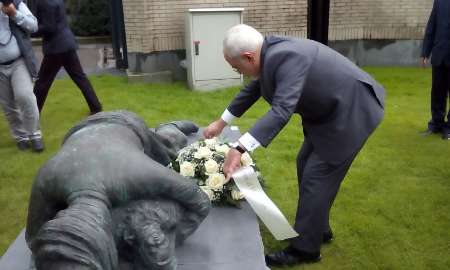 The Hague, June 23, IRNA – Iran’s foreign minister laid flowers on the symbolic tomb erected in memory of the of victims of chemical weapons on Thursday during a visit to the Organization for the Prohibition of Chemical Weapons.

Mohammad Javad Zarif then was received by the head of the Organization for the Prohibition of Chemical Weapons and the two hold talks.

Iran’s top diplomat is expected to address the Clingendael Institute later in the day.

Zarif has so far met with the Dutch parliament speaker, prime minister, minister of economy and the Dutch foreign minister.

He has also made a speech in Netherlands National Congress before members of the foreign policy commission.

During the meeting between Zarif and his Dutch counterpart, the two signed a political memorandum of understanding.