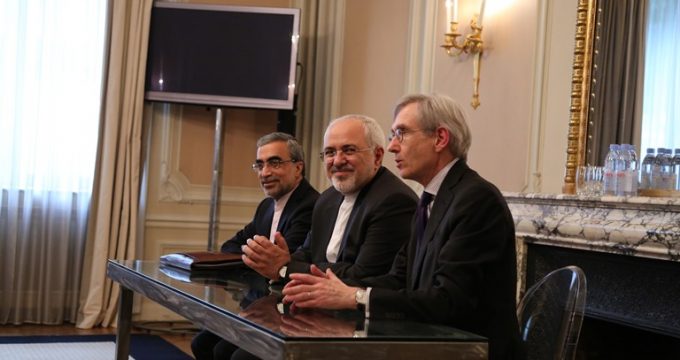 Paris, June 22, IRNA – Foreign Minister Mohammad Javad Zarif said on Wednesday that business with Iranian banks is risk free and the western banks must get rid of the psychological atmosphere and the concern has no place.

Zarif made the remarks in a meeting with members French Senate Committee on Foreign Affairs, Defense and Armed Forces in Paris on Wednesday.

The IAEA for several times verified that Iran honors commitment to the nuclear deal in the context of Joint Comprehensive Plan of Action, but, regretfully some of the European and French banks did not get rid of psychological impacts of sanctions era, Zarif said.

‘We believe that this atmosphere is unreal and no threat is posed to banking cooperation with Iran,’ Zarif said.

French bank BNP Paribas has been fined about dlrs. nine billion by Americans and Iran believes that it has been illegal and foreign banks should not have concern to do business with Iran, Zarif said.

France played a key role to bring US international sanctions to an end, he said.

You can take advantage of Iran human resources in production and exports of goods to the region and since both sides cooperation in auto making and other fields are well-prepared, Zarif said.