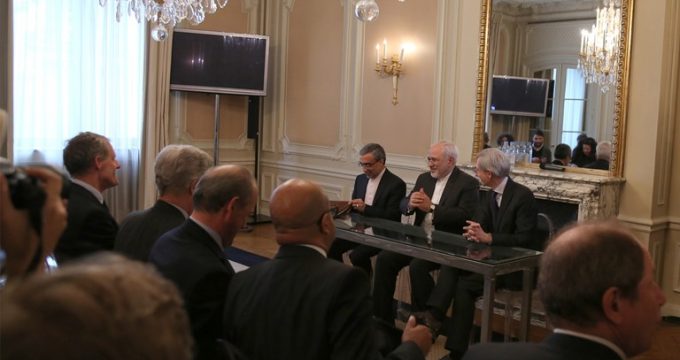 Tehran, June 22, IRNA – Foreign Minister Mohammad-Javad Zarif said on Wednesday that there are two diplomatic and military solutions for Syria, but the diplomatic choice should be taken.

‘In Syria, we should be after diplomatic solution; military solution in Syria means efforts to meet the needs of one side in exchange for threatening all; this mechanism will not work,’ Zarif said in a meeting with the members of French Senate Committee on Foreign Policy, Defense and Armed Forces.

He said by diplomatic means he meant finding the methods in which all will have a share.

‘We believe in Syria, diplomatic solution is inevitable; so we have to compel people of Syria to sit on the negotiation table,’ he added.

He announced, ‘We should admit that political solutions should be in a way that all think they have interests.’

Announcing readiness for cooperation with France in connection with the regional problems, he said, ‘We believe problem with Syria, Lebanon, Bahrain and Yemen should be solved by people of the region and the country.’

He said foreign countries should only help. ‘We cannot dictate. We will face resistance if we do so.’

On Lebanon’s issue, Zarif said, ‘We should let people of Lebanon come to a result. Any decision made by the Lebanese people will be acceptable to Iran. We just help the Lebanese people to elect in a safe environment. Many of the good choices in Lebanon do not come as a result only because the Lebanese think they are dictated from abroad.’

As for Turkey, Zarif said, ‘We do have good relations with Turkey. We are at odds on Syria, but we do hold dialogue. The basis of our dialogue in Syria is the need to reach a diplomatic solution based on principles and regulations rather than people.’

On human rights, he said it is a national issue addressed by observation of the rights of citizens by the government.

‘A look at our region will reveal that there are few countries whose affairs have been based on elections in the past 37 years. Over the past 37 years we had president each term being against his predecessor. This means, the elections held by presidents resulted in coming to power of their opponent.’

‘We believe rights of all citizens should be observed and government is committed in this concern. However, we oppose politicization of human rights and believe such a use will spoil human rights.’