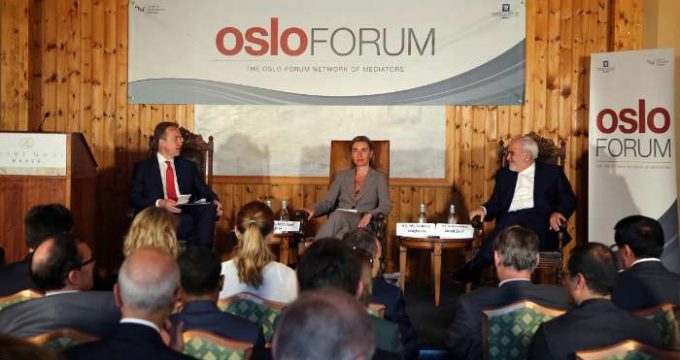 Tehran, June 19, The Iran Project – Iranian Foreign Minister Mohammad Javad Zarif trip to Norway and Germany on his second EU tour and his attendance in Oslo Forum, liberation of Fallujah by Iraqi army and United Nations High Commissioner for Refugees Filippo Grandi visit to Iran dominated the country’s media outlets in the past week (June 13–June 19).

Iran, Norway hold a seminar on JCPOA, opportunity for cooperation

A seminar entitled ‘JCPOA and the opportunities for cooperation between Iran and Norway’ began in Oslo on Monday.

In a press conference with his Norwegian counterpart, Foreign Minister Zarif called for regional cooperation with the Scandinavian country.

Iranian deputy FM said Mon. Iran is concerned about the grouping of the Israeli regime in the Middle Eastern and South Asian parties to the Comprehensive Nuclear Test Ban Treaty (CTBT).

US Secretary of State John Kerry claimed on Wednesday that the Obama administration has met its sanctions relief obligations to Iran under last year’s landmark nuclear deal but is willing to further clarify what is and isn’t allowed in response to renewed Iranian complaints that it’s not getting all the benefits it deserves.

German Foreign Minister Frank-Walter Steinmeier said on Wednesday that Germany wants strong ties with Iran in all domains and not only in the political and economic but in cultural and social fields.

White House: Even Donald Trump won’t want to tear up the Iran deal

Despite Donald Trump’s repeated claims that he will “dismantle” the Iran nuclear deal if he becomes president, a top White House aide expressed confidence on Thursday that the next commander-in-chief, including the presumptive Republican nominee, would preserve the deal in order to prevent a potential military conflict in the Middle East.

The United Nations High Commissioner for Refugees Filippo Grandi praised Iran as a country which could be considered as a role model in offering healthcare and education to refugees.

Zarif: Iran can be important trade partner for Germany

Foreign Minister Mohammad-Javad Zarif said on Wednesday that Iran can be an important trade partner for Germany.

Iran sends experts to US to discuss assets frozen by Washington

Iranian experts were sent to the United States to negotiate the issue of the country’s assets frozen by Washington.

Iran says Boeing deal biggest with US ever

Iran says it expects an emerging deal to purchase planes from US aerospace giant Boeing to become the biggest civil trade agreement between the two countries after the 1979 Islamic Revolution.

Iran is next to join the Shanghai Cooperation Organization (SCO) which will officially have India and Pakistan on its roster next week, Kazakh President Nursultan Nazarbayev has said.

Leader of the Islamic Revolution Ayatollah Seyyed Ali Khamenei says the proper implementation of resistance economy can provide for the needs of Iran as well as promote its dignity.

The opening of Iran’s first-ever aquarium tunnel in the city of Isfahan has contributed to Iran’s tourism sector in a remarkable way, according to the architects who created the aquarium project.

Architecture booms as Iran opens its doors to the world

Iran is “on the verge of a new era for architecture” according to local architects, as change sweeps through the Islamic republic following the lifting of crippling economic sanctions.

Huge inferno and fire, lasting about two hours, as a result of gas explosion in Shahran district of Tehran has been successfully curbed as the fire department and emergency officers are still there for likely consequential services.

The air pollution caused by dust and particles in Iran’s western provinces, including Lorestan, has reached “dangerous” levels, a senior environmental official announced.

Iran overcomes Argentina in a five-setter

The top diplomats of the United States and Iran exchanged opinions on the implementation of the nuclear deal and addressed the Syrian conflict.

Iraqi forces have liberated key areas in Fallujah from Daesh terrorists, raising the national flag of the country over the government buildings.

Zarif says Syrians themselves should decide their future

Syrian people themselves should decide their future, Iran’s foreign minister told reporters on Wednesday upon arrival in the German capital.