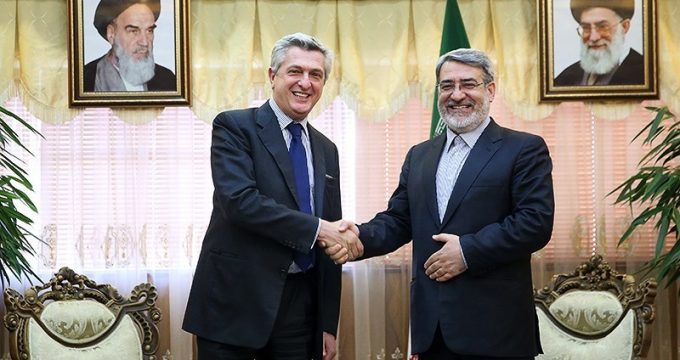 He made the remarks in a meeting with the UN High Commissioner for Refugees Filippo Grandi here on Saturday afternoon.

Considering Iran’s geographical situation it is more than 3 decades that Iran is facing Afghan and Iraqi refugees’ issues and at a time Iran was hosting more than 3 million refugees from the two countries.

He said that more than 97 percent of Afghan refugees are living in Iran society and like Iranian citizens enjoy education, health, job, security and judicial cooperation.

Rahmani Fazli underlined that Iran believes in volunteer return of the Afghan refugees to their homeland, but the difficult situation in Afghanistan such as lack of necessary infrastructures, including housing, education and the most important one security, has caused the refugees look at the issue with doubt.

The minister called for increase in the international community assistances for refugees, and said that although financial supports of the UN for refugees is small, but it could be used to increase educational and sanitation services for Afghan refugees.

Filippo Grandi appreciated Iran’s helps to refugees in the past three decades, and said that until peace and tranquility returns back to Afghanistan we should help the refugees.

He said that we also believe that the most important way to resolve the Afghan refugees crisis is creating security and the UN is doing its utmost to do so.