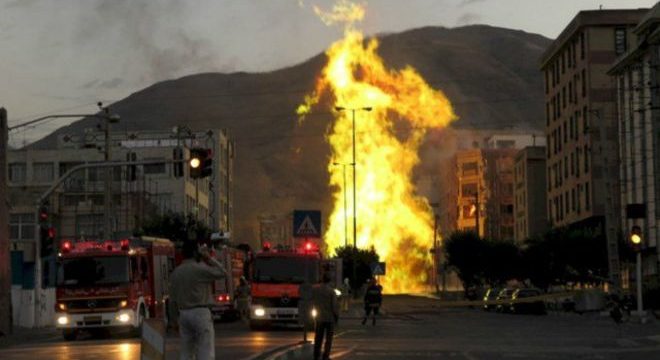 ‘Unfortunately, the death of one person in the accident has been confirmed,’ said Tehran Deputy Governor Gholam-Hossein Aram.

‘The accident took place at 4:30 early in the morning (local time) when there were not too many people around in the neighborhood,’ Aram said.

‘This, fortunately, resulted in the least number of casualties,’ he added.

According to him the fire caused by the blast was put off in two hours.

The blast has created a 100 meter long, 50 meter wide and 50 meter deep hole, causing the collapse of a nearby subway construction site.

Two office and residential buildings were caught on fire, resulting of course in no deaths or injuries, said the fire department and emergency officials.

Yet, two people working at the subway construction site have presumably been trapped in an under-construction tunnel.

Investigations are underway by the experts, Aram said.