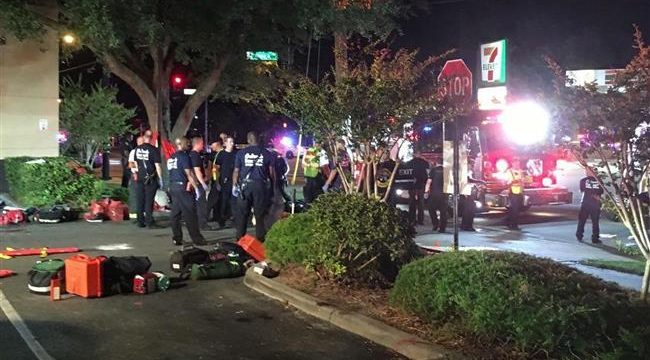 Orlando Shooting: It’s time to look at ourselves, not Islam

Every conversation that follows an ISIS inspired, homegrown terrorist attack is not only predicable, but also wrongheaded. And given the tragedy of Orlando follows so soon after the violent massacre in San Bernadino, the conversations are now at a histrionic level.

Cultural and political opportunists will fixate on the attacker’s ties to so called Islamic terrorist groups, they will investigate and exploit whatever piece of information points to a cultural problem within Islam and anything else that warrants the justification of tighter surveillance on America’s three million Muslims.

Omar Mateen, the Orlando gunman, was described by his ex-wife as not only someone who was mentally unstable, but also as someone who struggled with drug abuse, a confused sexual identity, and as someone who showed no signs of religious radicalization. The FBI said Mateen had expressed ties with both al-Qaeda (Sunni) and al-Qaeda’s bitter enemy Hezbollah (Shia).

If these homegrown attacks are rooted in Islam, as many cultural conservatives suggest, then explain why 3 million American Muslims have a history of living peacefully in America for two hundred years, only to suddenly carry out a half-dozen attacks within the last decade. Clearly, something else is going on.

And that “something” is, as sociologists and terrorologists tell us, a combination of a variety of social evils that have nothing to do with Islam – a cocktail that includes perpetual wars, racism, marginalization, criminality, political/moral/social grievances, the normalization of violence, and more. But these are the evils no one seems willing to engage in a conversation about. The media and political class find them too difficult to narrate, and far too difficult to attach a bumper sticker.

“Hillary Clinton won’t even say what the problem is,” thunders Donald Trump on the campaign trail. “The problem is radical Islam.”

This is the slogan and refrain of the day, and has been since the attacks of September 11. This slogan makes us feel good about ourselves. It divides the world into a childish binary: good guys versus bad guys. It posits there’s a problem in ‘their’ culture and never one in our own.

One of the most exhaustive investigative pieces into homegrown radicalization illustrates exactly how the problem of violent extremism is not a ‘their’ problem but a ‘we’ problem, and how “a spiral of despair, alienation, and anger” into which some young Muslim men “fall as their efforts at finding decent jobs and status in the Netherlands fail” represent part of a “broader trend of Western European nations’ inability to integrate even those Muslims born and raised on the [European] continent.

“You don’t become radicalized instantly,” Salem el-Idrissi, a Dutch social worker, explained to journalist and Buzzfeed Middle East correspondent Borzou Daragahi. “You get kicked out of school. You can’t get a job, or you get fired from a job. Your family life is hard.”

The process of radicalization often occurs during the process to form self-identity. In the case of radicalization in The Netherlands, Borzou described it like this: “They smoke hash, they start having sex, they try to make Dutch friends, and they see themselves as Dutch. But many are ultimately rejected, spurned by the mainstream. They perceive they’ve been denied jobs or other opportunities because of their background.”

ISIS recruiters, online and off, are adept at grooming young Muslim males who have fallen into “a spiral of despair, and anger” and particularly those who have experienced imprisonment or harassment from law enforcement. To that end, security clampdowns and increased surveillance on Muslim communities and mosques reinforces ISIS’ efforts to convince Muslims they’re not wanted in the West.

Today US presidential candidate Donald Trump restated his commitment to ban all Muslims entering the United States “until we can figure out what the hell is going on.” This not only plays into ISIS’ central narrative, but it also leads us away from identifying and resolving the multitude of causes at the root of violent extremism.

The Orlando massacre is where homophobia, mental illness, and gun culture united to bring about the violent deaths of more than 50 LGBT Americans. In other words, and with the memory of the preceding 15 mass shootings that have come during Obama’s presidency, this attack was a very American experience.

Forgotten also will be the fact that a non-Muslim American, armed with weapons and explosive devices, was on his way to a gay pride rally in Los Angeles the same day of the Orlando shooting, which is a reminder that homophobia belongs to no one religion, and if you think it does – you haven’t met enough atheists.

We have no choice but to figure out these problems together, united, not divided and terrified of the other. We cannot cave to those who exploit our fears for political and personal gain. We share the same problems, we must also share the same solutions.

This article was written by CJ Werleman for American Herald Tribune on June 14, 2016. CJ Werleman is a journalist, political commentator, and author of ‘The New Atheist Threat: the Dangerous Rise of Secular Extremists.