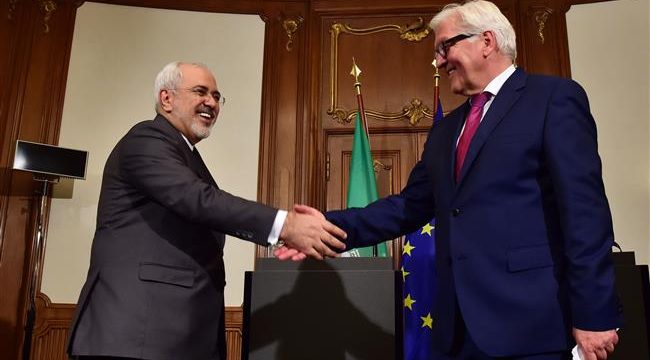 “We believe that extremism is a danger for all of us and today, the German government and people, who host a large number of refugees in their country, have a close watch on outcome of violence and extremism in our region,” Zarif said in a joint press conference with his German counterpart Frank-Walter Steinmeier in Berlin on Wednesday.

“In our opinion extremism will not be limited to any region and confronting it will be possible in light of global solidarity. We should find a diplomatic solution to campaign against terrorism and extremism because military solutions are only part of our campaign against extremism. A comprehensive solution needs to be found for cultural, economic and social issues, for return of those feeling marginalized, and for preventing access of extremists to financial, human and arms resources. In these fields, we need more than anything to solve regional problems through diplomatic channels,” he added.

Zarif underlined that Iran is “highly interested in having more discussions on Iraq, Syria, Yemen, Bahrain and Lebanon” with Germany and the EU as its old partners.

In relevant remarks in February, Iranian President Hassan Rouhani in a meeting with Steinmeier said Tehran is fully prepared to step up cooperation with Berlin in fight against terrorism.

“In addition to the ongoing efforts to enhance bilateral ties, Iran and Germany can and should work together to help resolve regional and international issues, particulalry when it comes to fighting terrorism and establishing regional peace and stability,” Rouhani added during the meeting in Tehran.

Stressing the need for the international community to stop the flow of financial and material support to the terrorist groups including arms, he said, “Terrorism is a serious threat to all, and  a (an international) campaign against it is paramount. Last month events (the terrorist attacks in Paris) showed that terrorism is a danger to everyone, including the European Union.”