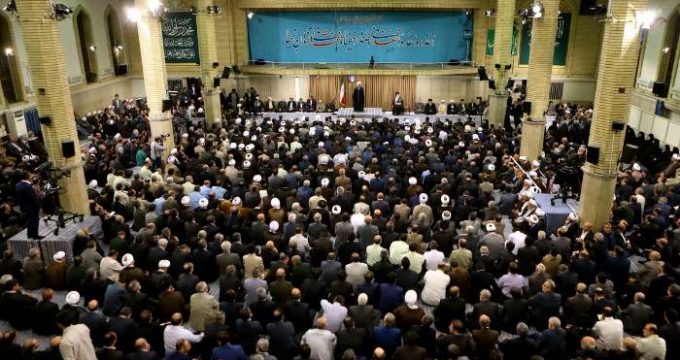 We can obtain 100K nuclear SWUs in less than 1.5 years: Ayatollah Khamenei

“In case the other party does not abide by its commitments, fortunately Iran has the capability to return to the previous status and we can- if we deem necessary- obtain 100,000 SWUs in less than a year and a half thanks to the new generation centrifuges.”

On Tuesday evening, the heads of the three branches, government officials and a group of senior managers of various sectors as well as political, social and cultural representatives met with the Leader of the Revolution.

At this meeting, Ayatollah Khamenei described recession and unemployment as the main problems of the country and stressed that increasing the country’s fundamental potentials will lead to the nation’s immunity and power.

“I have repeatedly reiterated that the country must grow in power and that we must promote our potentialities,” the Leader pointed out, adding that it is only then that Iranian officials can expect the nation to have peace of mind.

The Leader of the Islamic Revolution pointed to the threats by some US presidential hopefuls to scrap last year’s nuclear agreement, known as the Joint Comprehensive Plan of Action (JCPOA), between Iran and the P5+1 group of countries, saying the Islamic Republic will strongly respond to any such move.

“The agenda of the enemy today is to stop or eliminate the capabilities of the Islamic Republic or at least to prevent their growth,” Ayatollah Khamenei added.

Ayatollah Khamenei said the US has so far failed to fulfill a major part of its obligations under the JCPOA but Iran has abided by its commitments such as regarding its 20 percent uranium enrichment as well as Fordow and Arak nuclear facilities.

“Under the JCPOA, the other side was duty-bound to lift the sanctions which it has not done. The banking issues have not been solved. The issue of the insurance of oil tankers is implemented at a limited level,” the Leader said.

“The oil payment and our assets which we have in other countries are not returned to us,” Ayatollah Khamenei added.

The Leader emphasized that it is a “misconception that we [the Islamic Republic] can come to terms with the US. We cannot rely on illusions. The U.S.’s animosity towards Iran stems from its opposition with the very existence of the Islamic Republic and won’t be settled through negotiations. Some individuals think their animosity is due to our opposition to the United States. But what did the Islamic Republic do to France? Why did France play the role of the “bad police” during the nuclear talks and why do the governments of the Netherlands and Canada practice hostility towards us?”

“Fortunately Iran has the capability to return to the previous status and we can- if we deem necessary- obtain 100,000 SWUs in less than a year and a half thanks to the new generation centrifuges; so the other side should not think our hands are tied.”

“There are fractures and breaks within the JCPOA, which if taken care of, the deficiencies of the deal would be settled or decreased,” said the Leader.

His eminence Ayatollah Khamenei praised the Iranian team of nuclear negotiators for their efforts and stressed that: “what we point out about the JCPOA is by no means directed at the efforts of these dear brother, but at evaluating the performance of the other party.”