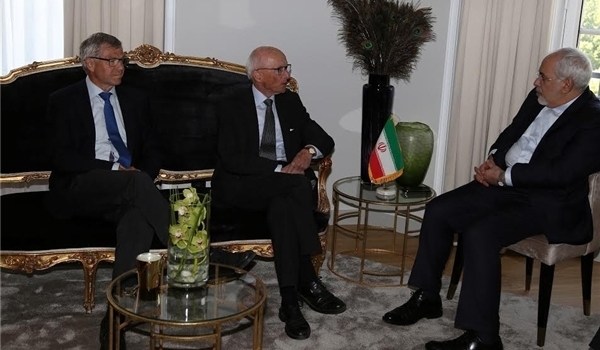 TEHRAN (FNA)- Iranian Foreign Minister Mohammad Javad Zarif underscored the necessity for the enhancement of relations with Norway in bilateral and international arenas.

Zarif made the remarks in a meeting with two of former Prime MInisters of Norway Kjell Magne Bondevik and Kare Isaachsen Willoc in Oslo on Monday.

During the meeting, the two sides conferred on Iran’s foreign relations after the nuclear deal between Tehran and the world powers as well as cooperation between Iran and Norway.

The two Norwegian prime ministers underlined Iran’s age-old and deeply-rooted civilization, and expressed pleasure with the positive developments in Iran’s foreign relations after the nuclear deal.

They also supported expansion of mutual cooperation with Tehran.

Zarif, for his part, expressed the hope that relations and cooperation between the two countries would further enhance in bilateral and international fields.

Earlier today, Zarif and his Norwegian counterpart Borge Brende in a meeting in Oslo discussed the latest regional developments, specially in Iraq, Syria and Afghanistan.

During the meeting, Zarif and Brende conferred on the crisis in Syria and ways to end it as well as the situation in Iraq and Afghanistan.

They also held talks on bilateral ties between Iran and Norway and mutual political, economic and banking cooperation.

Iran and Norway as two countries with giant oil and gas resources have tried to develop close bilateral relations.

In relevant remarks in March, Norwegian Ambassador to Tehran Odyssey Norheim underlined that Norway and Iran are keen to boost the level of their bilateral relations.

“The Norway-Iran relations are booming after the implementation of the Joint Comprehensive Plan of Action and the removal of sanctions,” Norheim said.

She pointed to a recent visit by Brende to Tehran, and said, “Norway’s foreign minister traveled to Iran after 12 years and this will result in enhancing our mutual cooperation.”

Norheim said she met the CEOs of the Norwegian companies in Iran and the heads of Iranian firms in Oslo to find out more about the existing capacities for cooperation in oil, gas, marine industries and alternative energies.

Also in May, Iran’s Research Institute of Petroleum Industry and Norway’s International Aker Solutions Company signed a memorandum of Understanding (MoU) to broaden their cooperation in the field of oil industry.

“According to the MoU, the two sides would cooperate to develop new technology in Iran’s oil industry and transfer of advanced technology,” Deputy Head of Iran’s Research Institute of Petroleum Industry Amir Abbas Hosseini said.

He underlined that Norway is a symbol for advanced technology across the globe to apply the state-of-the-art technology in the oil industry.

“Iran will cooperate with Norway to modernize national oil industry,” Hosseini said while referring to Aker as one of the forerunner companies in upstream and downstream oil industry.