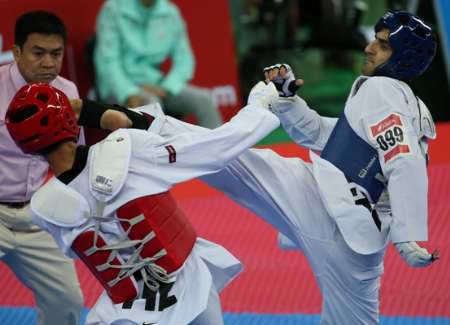 On Saturday, 17-year-old Kimiya Alizadeh Zenoorin received the gold medal in the women’s minus 62-kilogram weight division of the World Taekwondo Federation (WTF) G1 event after she defeated Nikita Glasnovic, a contestant from Sweden, by forfeit in the final encounter of the category held in the city of Thessaloniki.

Mahdi Khodabakhshi earned the Islamic Republic of Iran’s second gold medal as he triumphed over Piotr Pazinski from Poland 2-0 in the last contest of men’s minus 80-kilogram weight class.

Later in the day, Farzan Ashourzadeh managed to defeat a taekwondo athlete from the host nation 14-2 in the final of men’s minus 58-kilogram weight category, and grabbed another gold medal for Iran.

In the minus 54-kilogram division, Armin Hadipour downed Irish opponent Jack Woolley 13-2 in the last encounter of the weight class and added one more gold to Iran’s medal tally.

Sajjad Mardani, though, conceded a 1-3 loss to a contestant from Nigeria in the final competition of men’s over 87-kilogram section, and picked up the silver medal.

The Greece Open 2016 WTF G1 tournament started in Thessaloniki, Greece, on June 10, and wrapped up on June 12.

The tournament brought together dozens of male and female taekwondo practitioners from a number of countries, including Egypt, England, Greece, Iran, Poland, Russia, Serbia and Sweden.