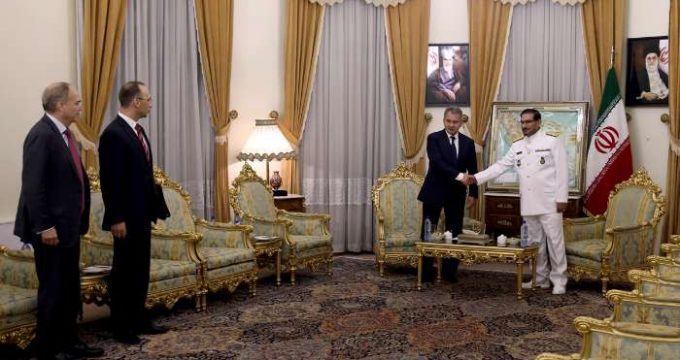 Tehran, June 10, IRNA – Secretary of Iran’s Supreme National Security Council Ali Shamkhani on Thursday urged the international community to mobilize all its capacities to punish and restrict those states that boost Takfiri terrorists by their public and covert support.

He made the comments in a meeting with Russian Defense Minister Sergey Kuzhugetovich Shoygu.

Shamkhani referred to continuation of the plight suffered by Syrian people due to the complication of the crisis in the region and said the approach adopted by the United States and its western and regional allies to the cisis in Syria shows that they are trying to create a margin of safety for the Zionist regime.

The official described such actions taken by the US and its western and regional allies as diplomatic and media displays performed to affect the public opinion and achieve electoral and political ends.

Shamkhani denounced comments and intrusive measures by some parties in addressing the crisis in Syria and insisted that no one but the Syrian people should decide their fate.

Nobody but Syrians themselves has the right to decide about the governing system and the future rulers of Syria, he said.

All the efforts should focus on preparing a safe atmosphere for holding election there for determining the country’s future, he added.

The official hailed the close, effective and increasing cooperation between Iran, Russia, Syria and the resistance pivot which resulted in the defeat and annihilation of terrorism networks in the region.

The international community should accept the reality and support priceless efforts made by Iran, Russia and Syria to fight terrorism, Shamkhani said.

The official urged the international community to mobilize all its capacities to punish and limit those states that boost Takfiri terrorists by their public and covert support.

Shamkhani underlined the continuation of ongoing efforts to replace dialogue with bloodshed.

Unfortunately, some countries manipulate the political dialogue as a delay operation in order to boost terrorist groups to make up for their crushing defeats, he added.

Shamkhani underlined the necessity for stopping activities made by certain states to boost terrorist groups and involving them in negotiations.

Accepting the current approach means allowing Takfiri groups to legally establish and equip their terrorist armies and take violent actions across the world, he noted.

Russian defense minister for his part hailed Iran initiation for holding the trilateral meeting between Tehran, Moscow and Damascus.

He said that comprehensive fights against terrorism is an international task that all countries must participate in it to have a safer world.

The Russian defense minister expressed his satisfaction with the discussions and coordination happened in Tehran trilateral meeting and expressed hope that the meeting help increase cooperation between the three countries in their fight against terrorism and restoration of sustainable peace and stability in Syria.