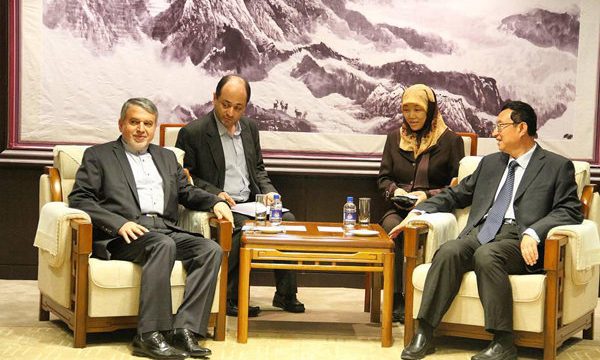 BEIJING, Jun. 08 (MNA) – In a meeting between head of the National Library of Iran and Chinese minister of culture in Beijing on Tue., the two sides called for the formation of a joint cultural commission after years of hiatus.

Seyyed Reza Salehi-Amiri, Head of the National Library of Iran (NLAI) held talks with Luo Shugang, the Minister of Culture of the People’s Republic of China, in Beijing on Tuesday, where he highlighted the need for the two countries to boost cultural ties to a strategic level.

“Those countries with deeper cultural ties have proved to have more stable relations compared to other countries with merely economic cooperation,” Salehi-Amiri said during the meeting, while expressing confidence that Iran and China could enjoy a new chapter in cultural cooperation following Iran’s nuclear deal.

“It is high time the two great nations of Iran and China learned more about one another,” he said, and went on to suggest that the two counties could achieve this end by holding joint exhibitions such as Silk Road special expo, holding cultural weeks and specialized sessions between the two side’s academic elites.

The Chinese minister of culture, for his part, noted the remarkable capacities for bilateral cooperation between the two countries, and called for the formation of Iran-China Joint Cultural Commission’s meeting after several years of hiatus.

The commission held its first session in 2012 and was not formed ever since then.

Salehi-Amiri heading a delegation arrived in Beijing on Monday and held talks with his counterpart, Han Yongjin, the Director of the National Library of China (NLC), and signed an MoU with Li Minghua, Deputy Director of the State Archives Administration, on sharing documents and the technology to preserve archive articles. He also attended the opening of the “Beautiful Iran”, an exhibition that showcases the natural beauty, historical sites and wondrous scenery of Iran.

The NLAI head is also scheduled to meet with Chinese Minister of Information Council on Wednesday.