A Look at Iranian Newspaper Front Pages on June 7

IFP has taken a look at the front pages of Iranian newspapers on Tuesday and picked headlines from 22 of them. IFP has simply translated the headlines and does not vouch for their accuracy.

Many newspapers on Tuesday covered a visit by Imam Khomeini’s grandson Seyyed Hassan Khomeini to the Foreign Ministry, and his remarks in praise of Foreign Minister Mohammad Javad Zarif.

The controversies regarding master musician Mohammad Reza Shajarian and the efforts to bring him back also remain a top story in Iranian media. His new album has recently obtained a licence for release, and IRIB has yet to announce whether his Rabbana will be aired during Ramadan or not. Conservatives, however, are slamming the government and reformists for focusing on the Iranian singer, who is believed by hardliners to be an opposition figure.

Newspapers also paid great attention to the Interior Minister Abdolreza Rahmani Fazli’s address to the Parliament, in which he briefed the MPs on the latest worrying statistics regarding social ills.

2- US and China to Stand against Pyongyang’s Nuclear Adventure

3- Aref Most Appropriate for Presidency of Parliament Research Centre

5- Terrorist Groups to Be Destroyed This Year: Iraqi PM 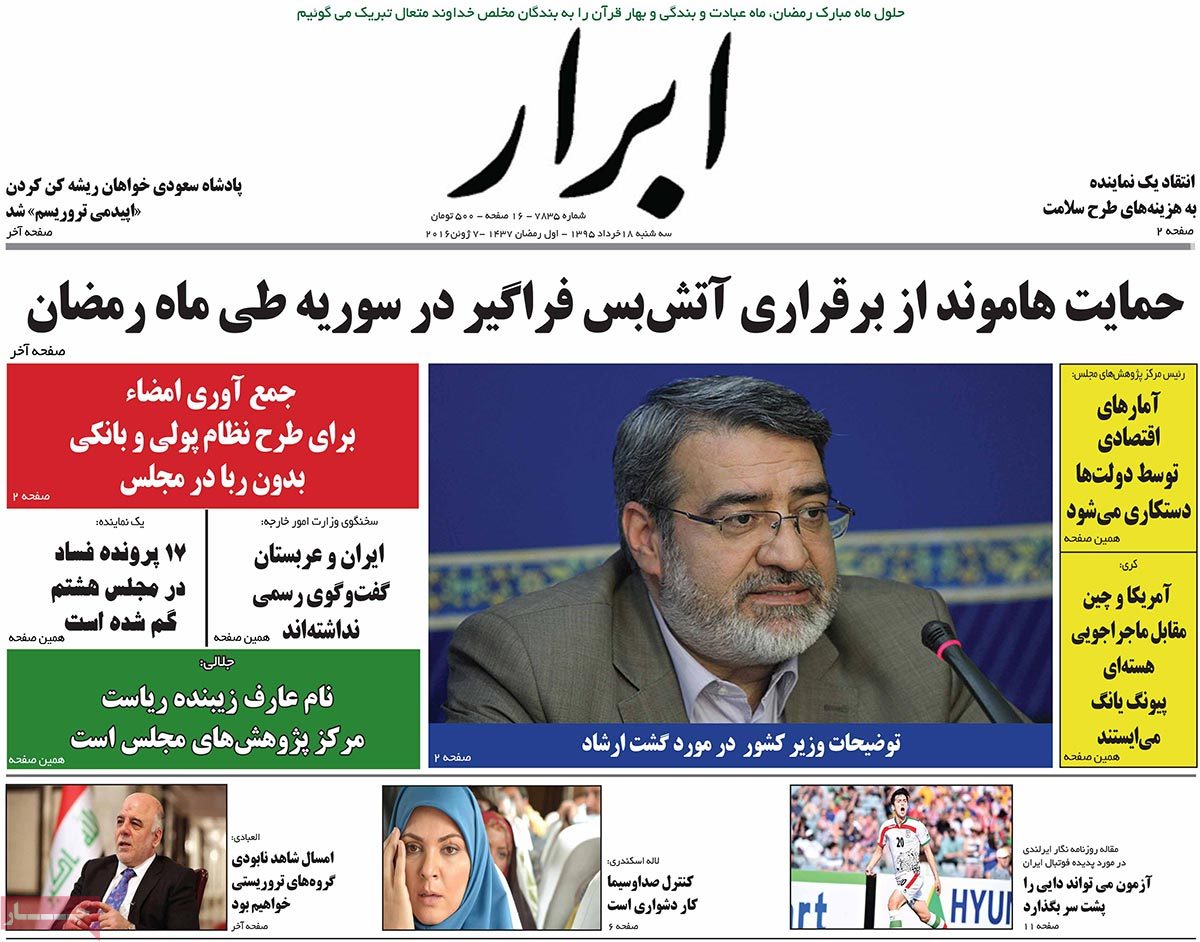 1- Iran and Japan in Talks to Develop Petchem Industry 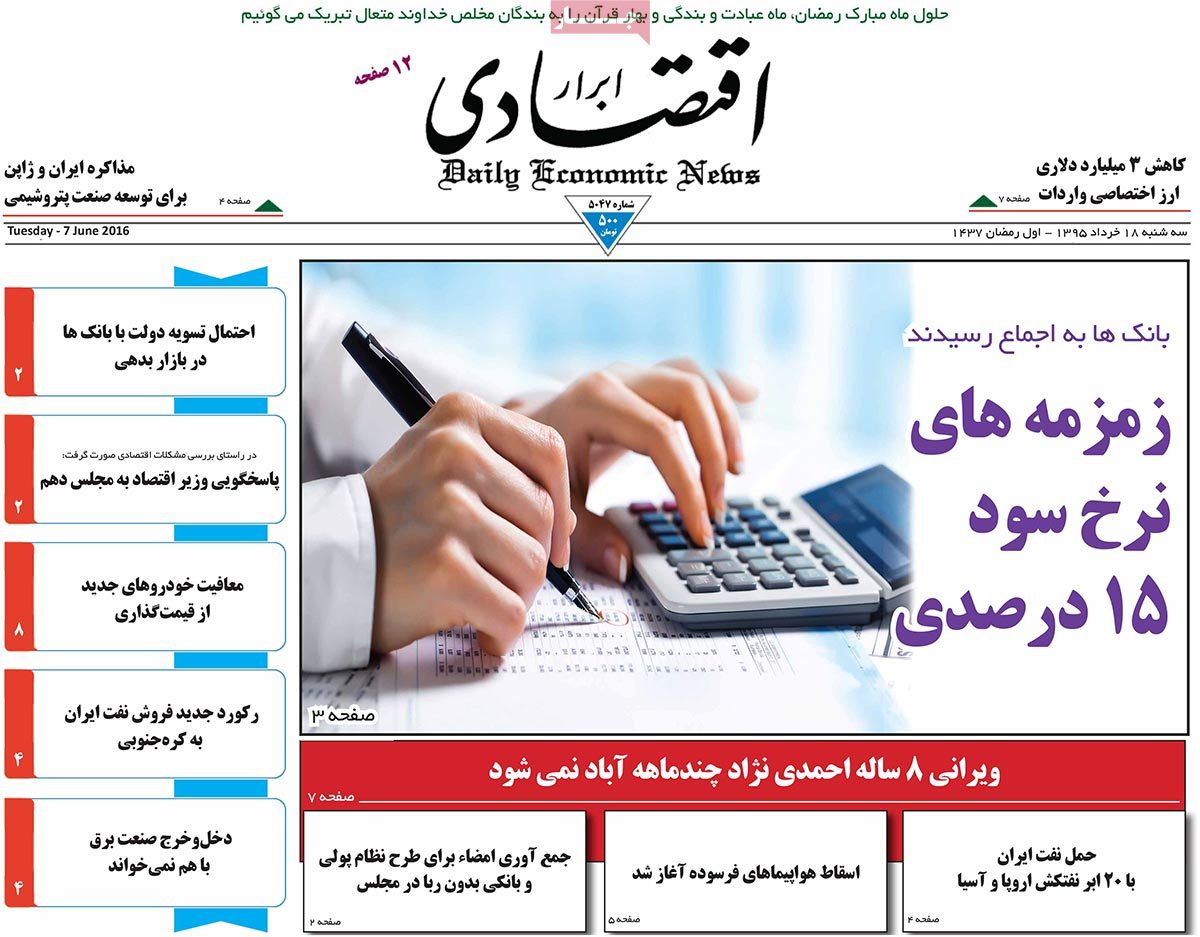 3- Similarities between Ahmadinejad and Chavez’s Legacies: Iran Saved from Chavezism

5- Why Swiss Said No to Cash Subsidies: Difference between Us and Swiss Population

6- Your Licence Will Be Nullified If Your Film Is Advertised on Satellite Channels: Culture Ministry Gives Ultimatum to Producers 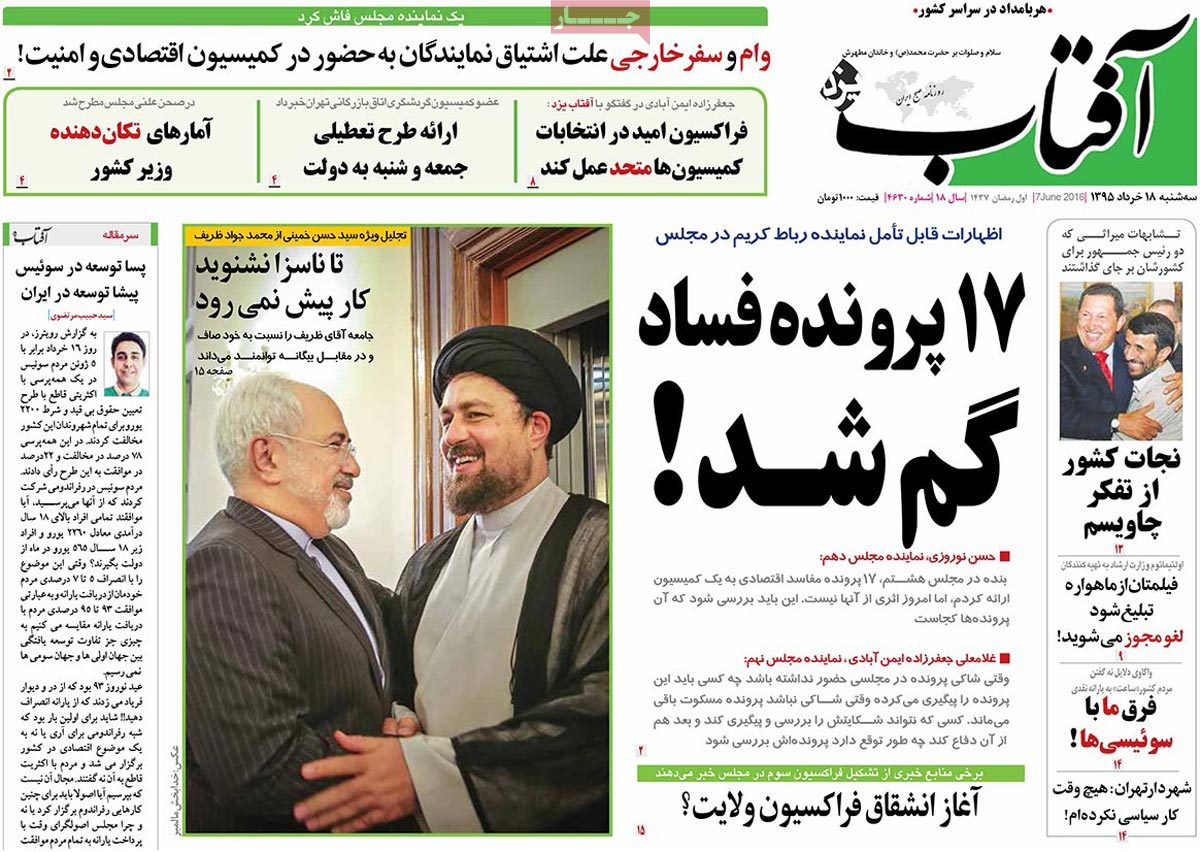 1- You Can’t Fool Everyone Forever: Imam Khomeini’s Grandson in Meeting with Zarif 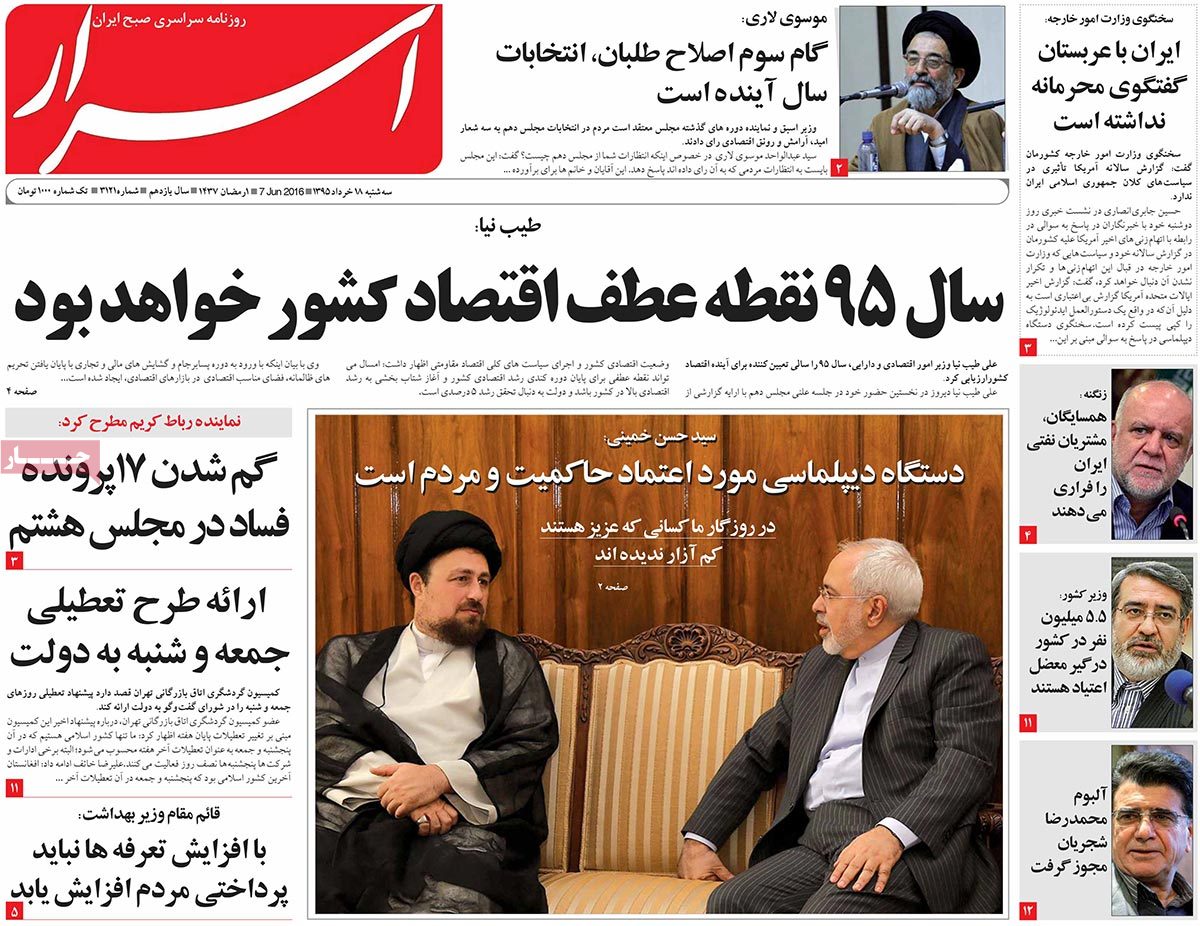 1- Clash of Clans’ War against Books: When Reading Loses out to Online Games in Absence of Planning

1- We Still Have No Candidate to Compete with Rouhani: Conservative Figure Bahonar

2- HRW Urges The Hague to Put Israeli Leaders on Trial

1- After 37 Years, Political Crime Law Is Approved and Communicated Ambiguously

2- Divisions Begin in Velayat Faction, the Conservatives in Parliament: End of a Faction’s Dream 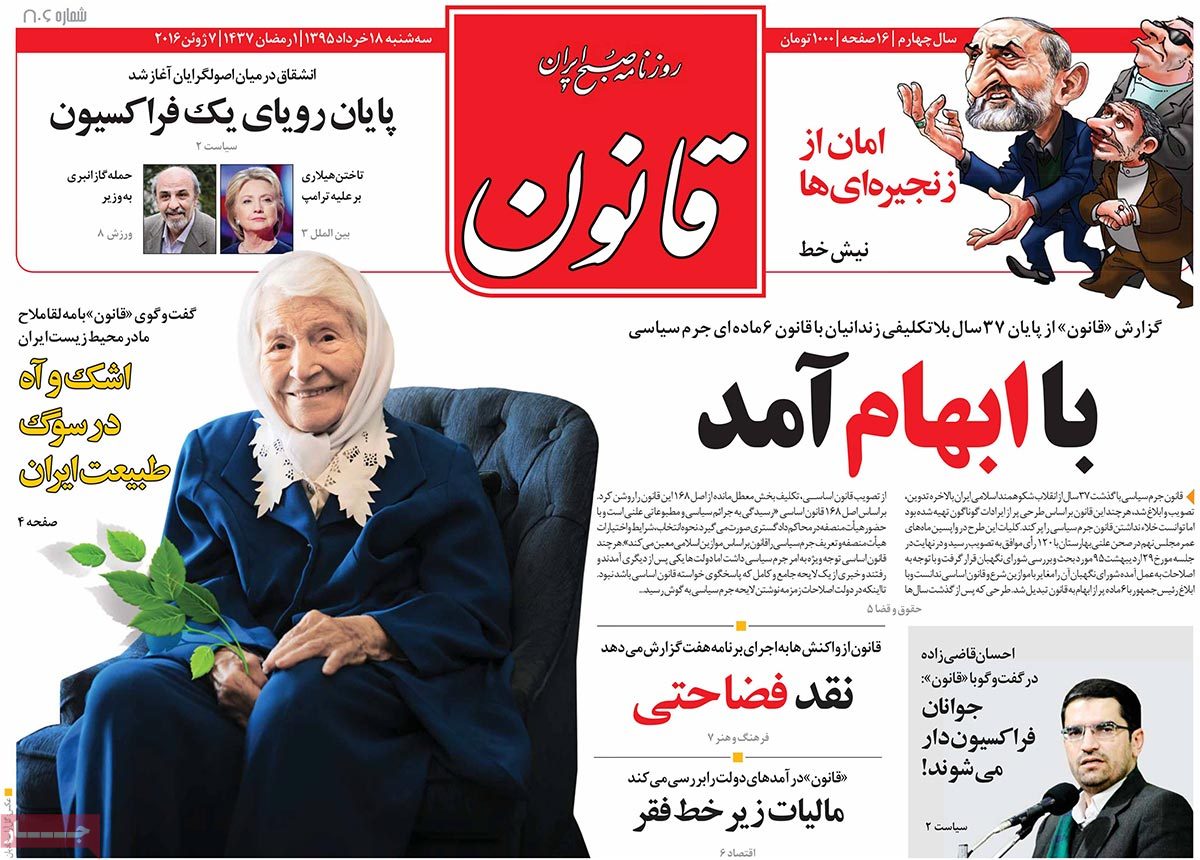 1- Americans’ New Claim: The Problem Is with Iranian Banks! 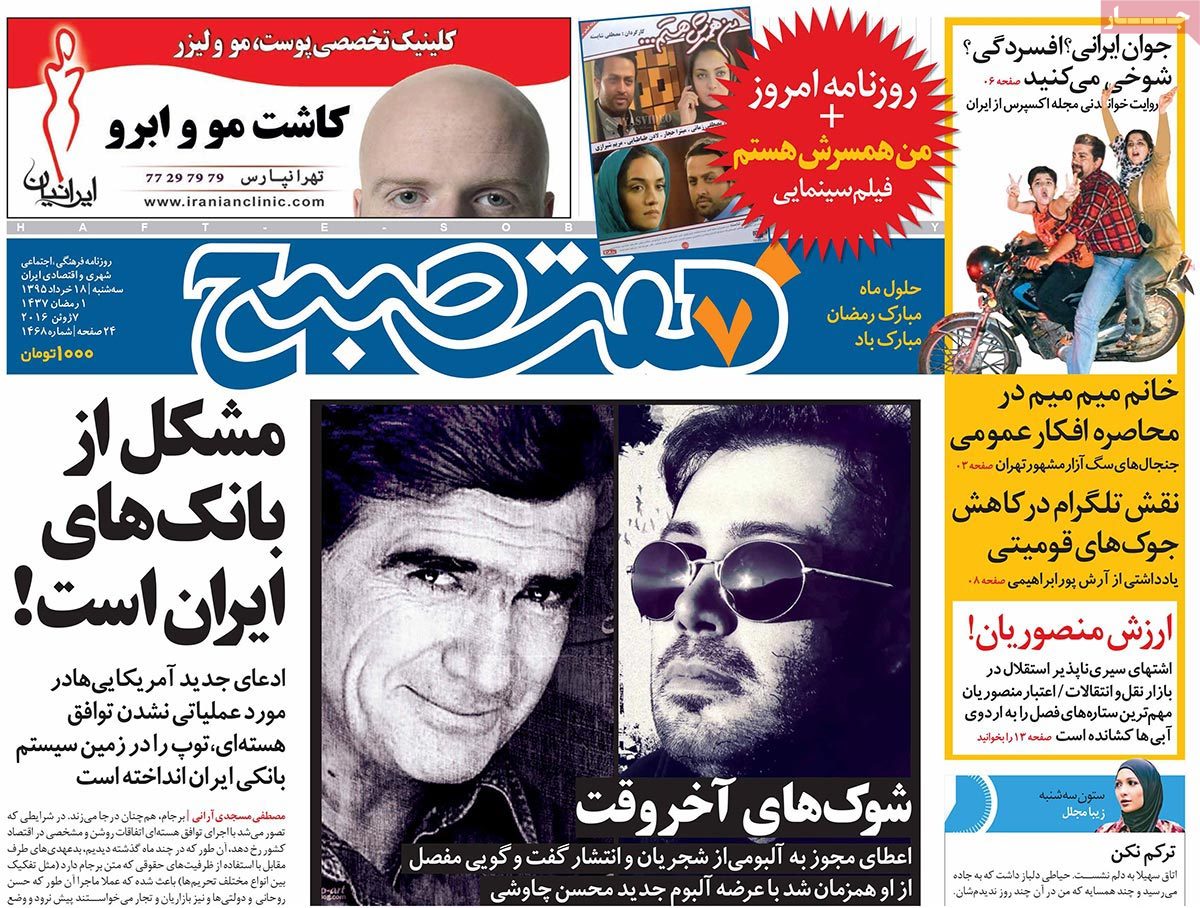 1- There Are 3.5m Unemployed People in Iran 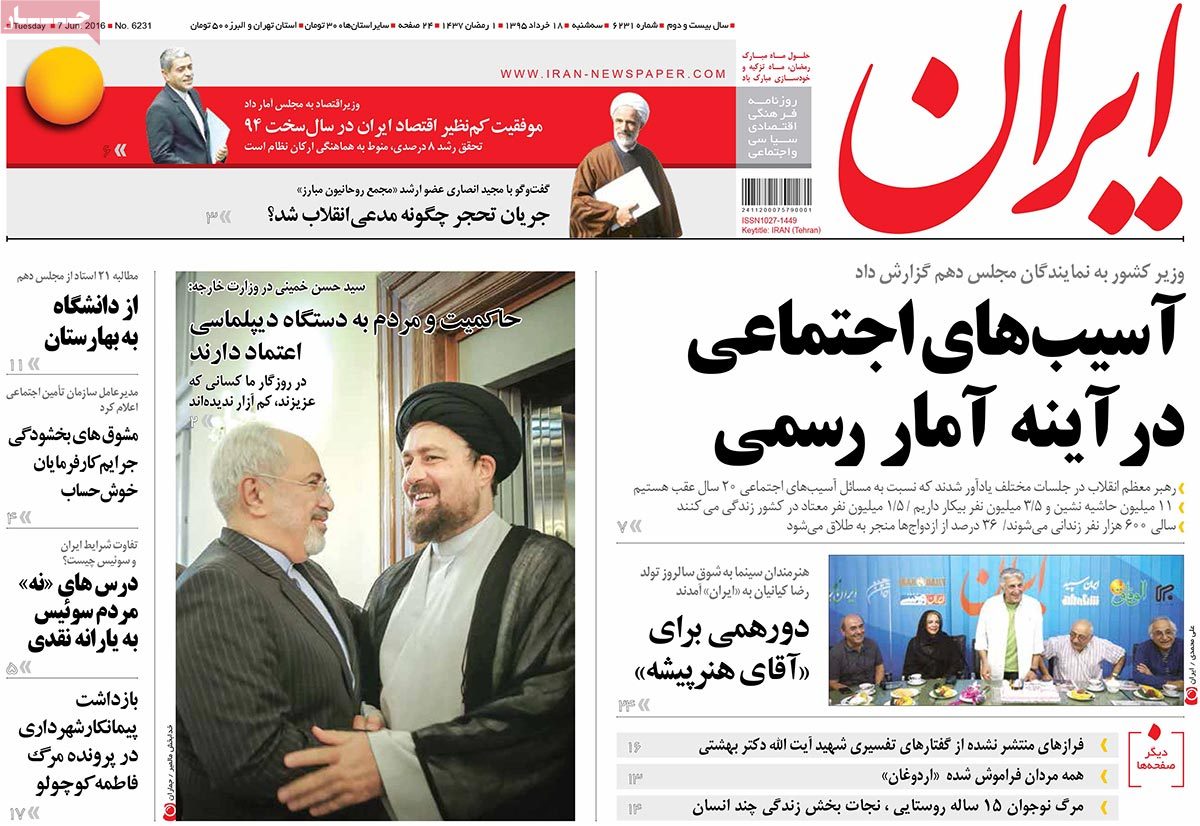 1- IAEA Has Had Access to Iran’s Non-Nuclear Sites: Amano 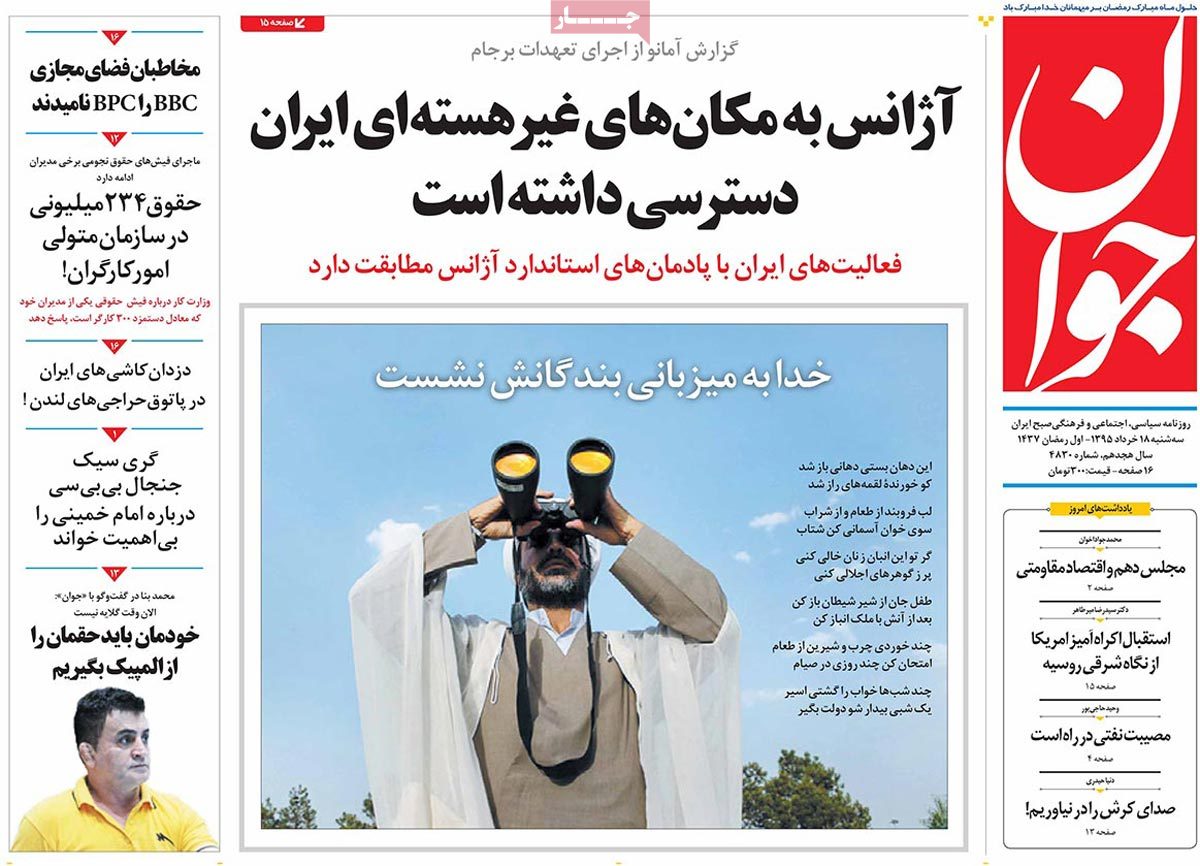 2- In a Message on Ramadan, President Rouhani Urges Leaders of Islamic Countries to Take Steps towards World Against Violence and Extremism

4- Amano: Iran Have Been Obeying UNSC Resolution and JCPOA 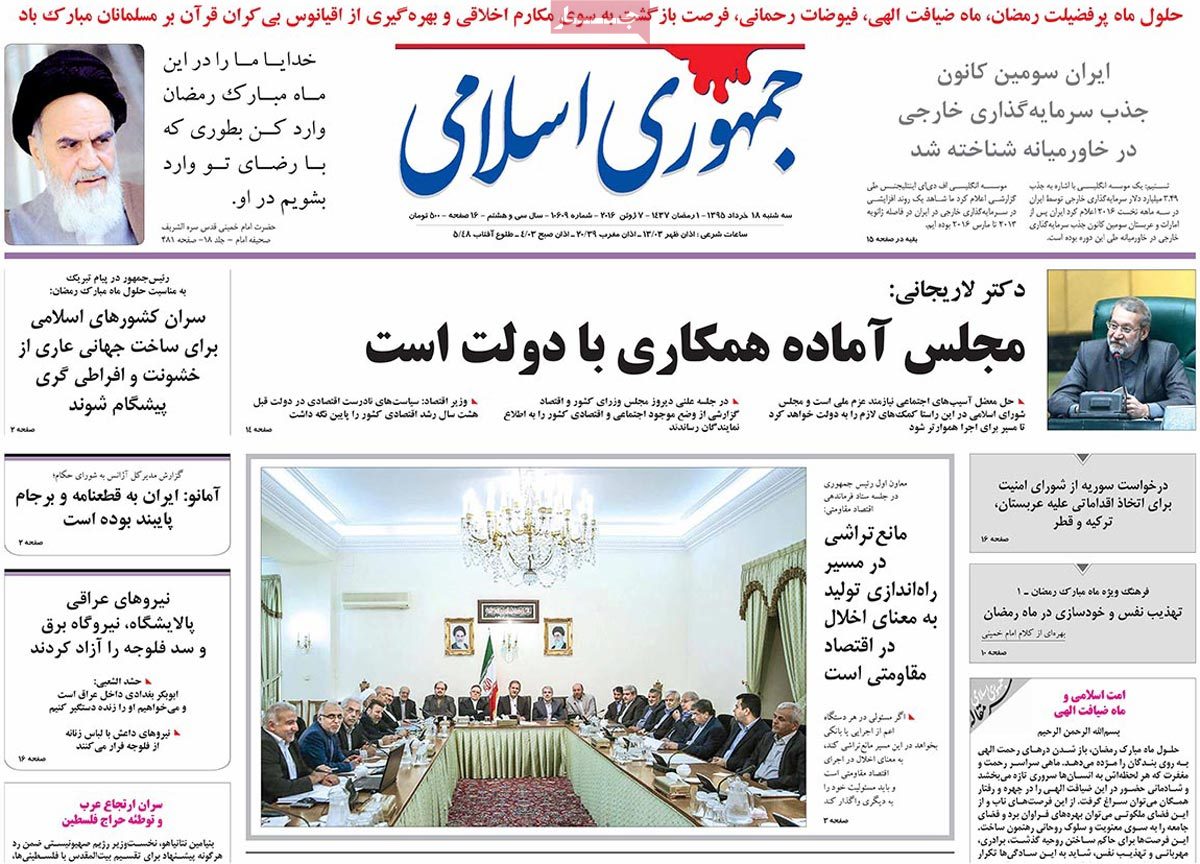 1- Promises Forgotten amid Trivial Issues [Kayhan’s top story lashes out at the government’s efforts to bring back Master Mohammad Reza Shajarian, who is believed by Conservatives to be against Islam and Revolution, instead of focusing on people’s real problems. In a rare move to prove Shajarian’s alleged corruption, Kayhan published his photos with Los Angeles-based Iranian singer Googoosh and famous expatriate Iranian actor Behrooz Vosughi.]

2- Aristocrats Are USA’s Tool to Create Crises in Other Countries: Brazilian Analyst 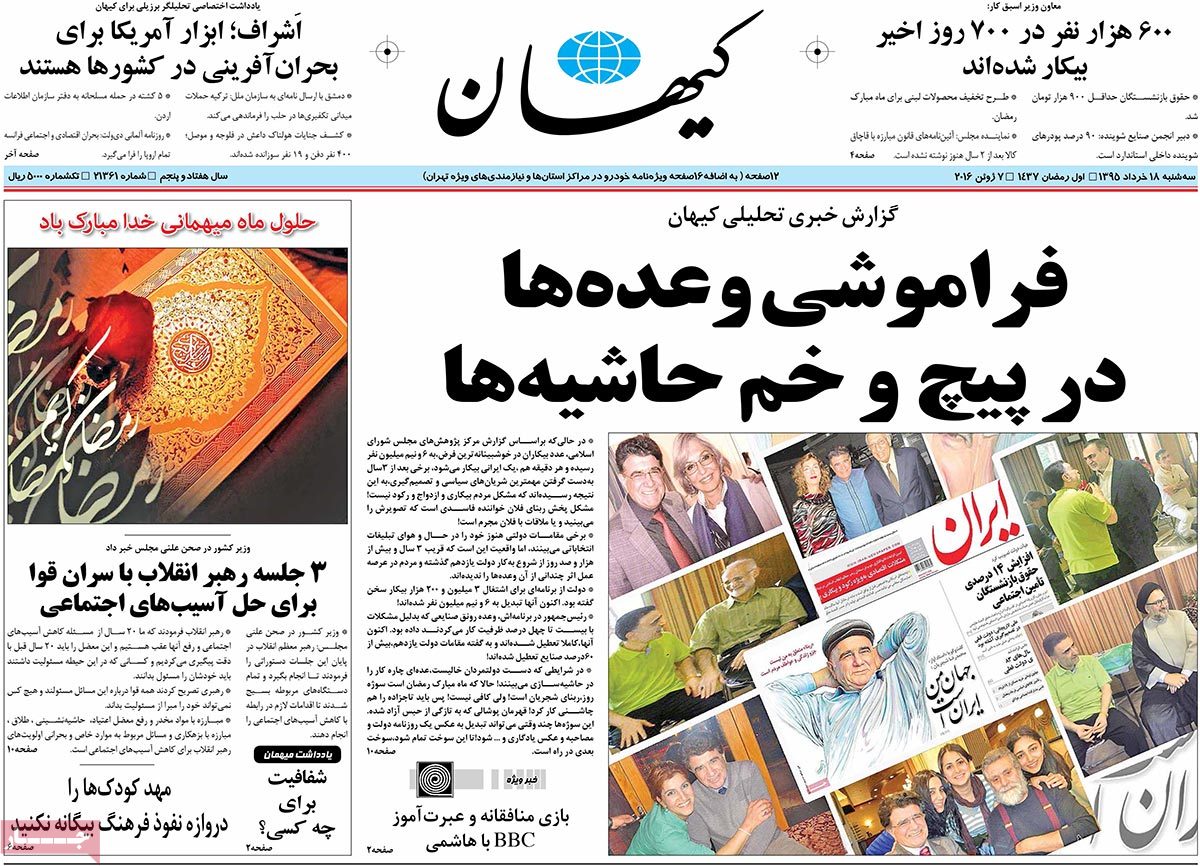 1- US Anger at Saudi Arabia’s Failure in Yemen: Why Does Washington Condemn Riyadh?

2- Security Council Is Where There Is No Security 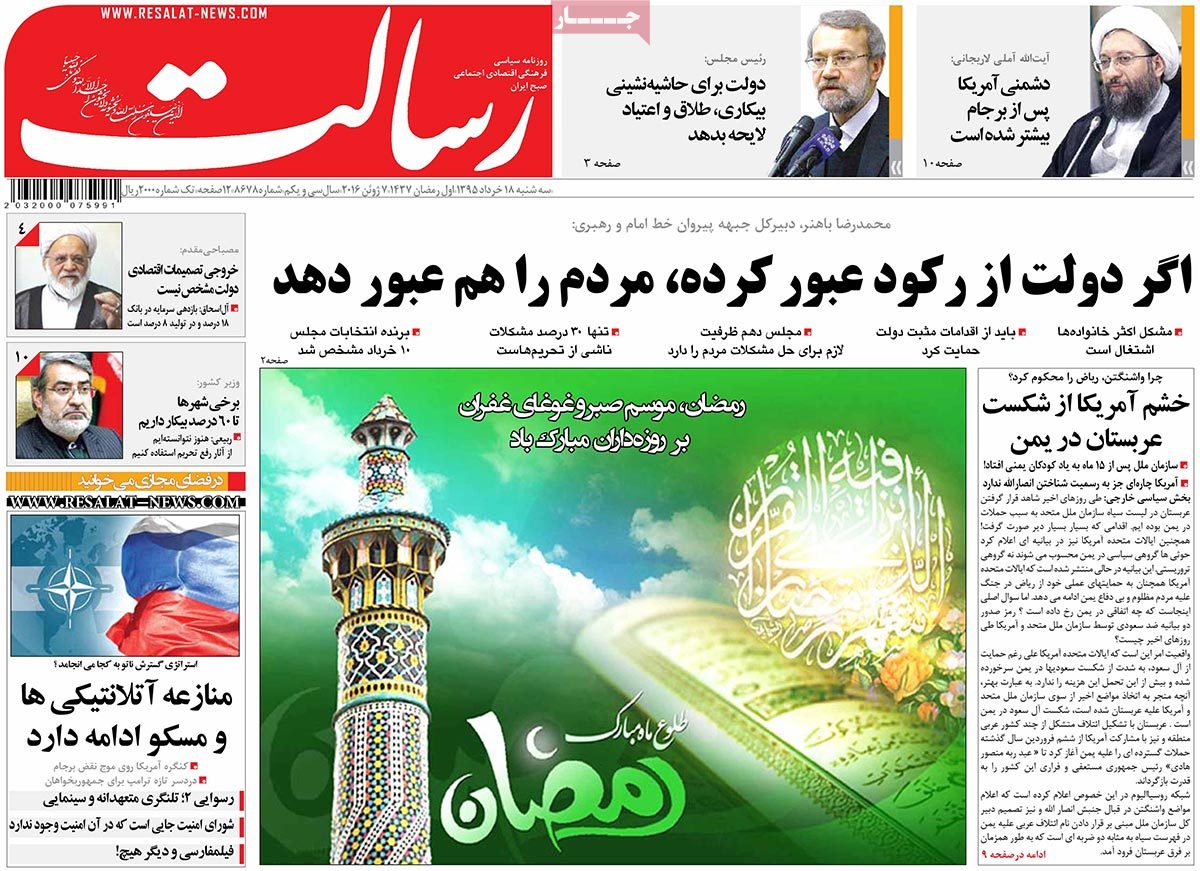 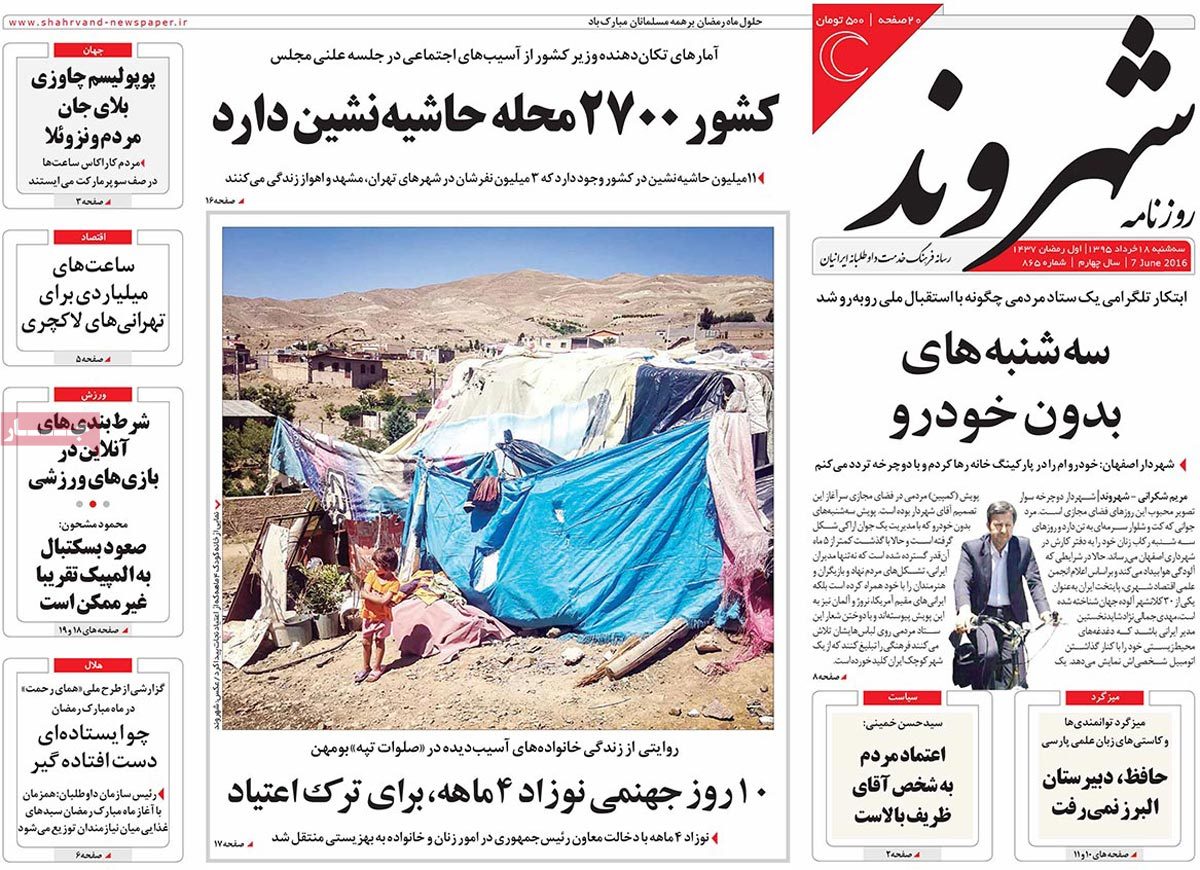 1- We Lag 20 Years behind in Dealing with Social Ills: Interior Minister

2- How Ahmadinejad Became Ahmadinejad: From Tehran Mayor to Iran’s President

3- Even If the Symbol of Populism [Ahmadinejad] Runs for Presidency, Rouhani Has Highest Chance in Next Year’s Presidential Elections: Politician 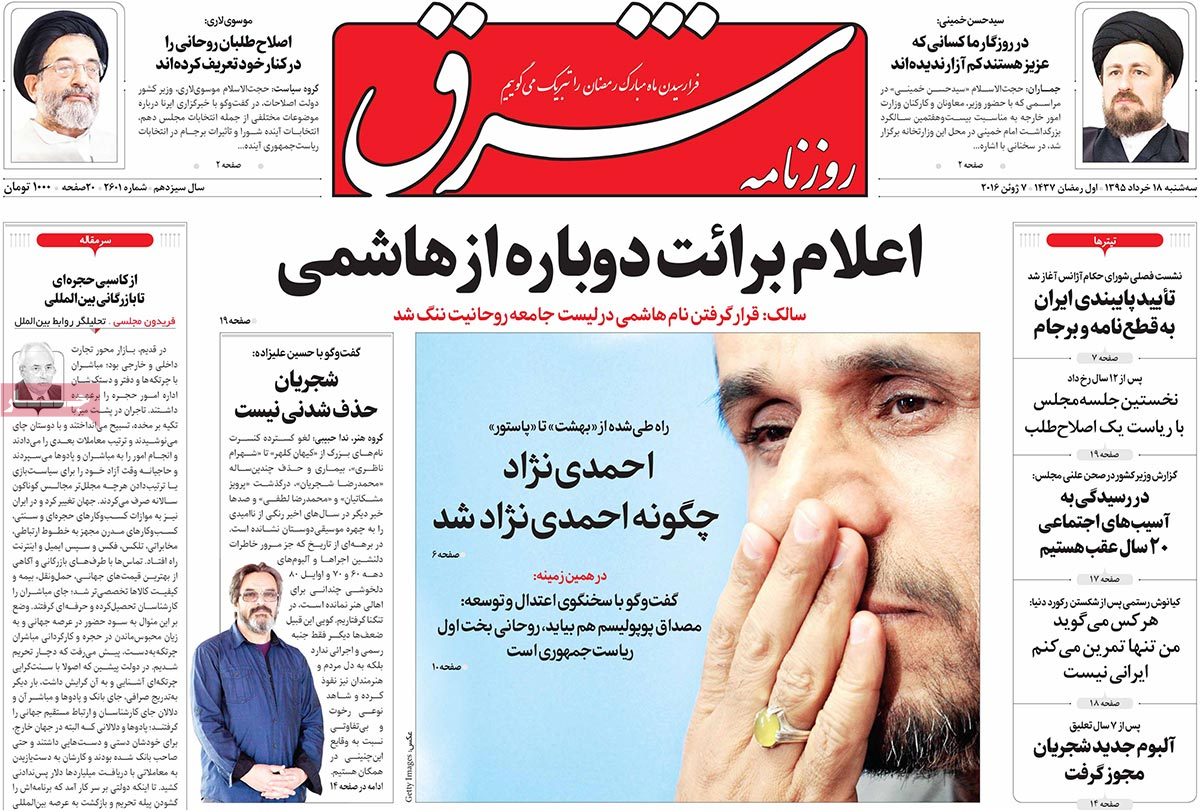 1- Political Voices of Mr. Singer [Shajarian]: Story of Singing Master Looking for a Way to Return 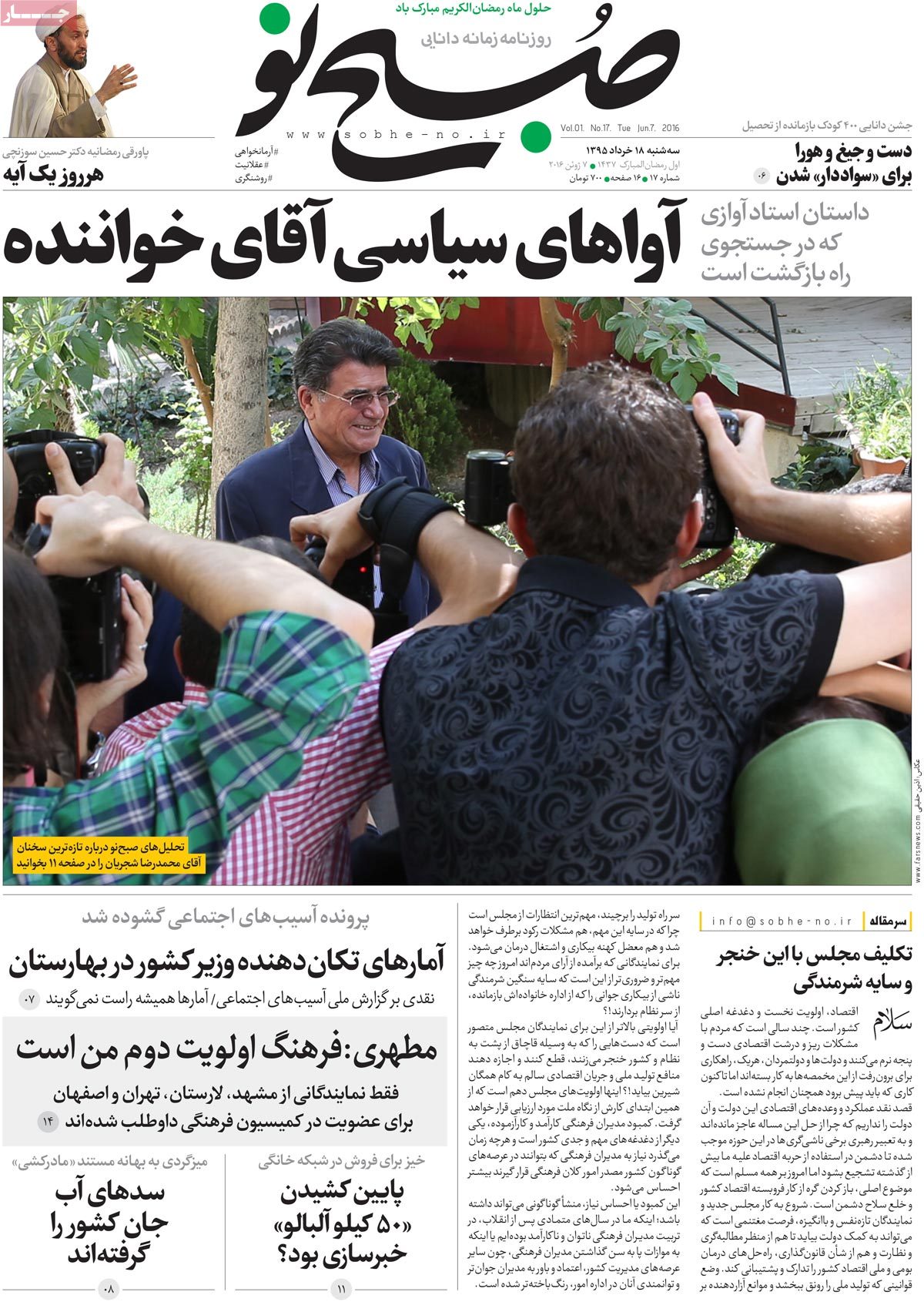 1-Social Ills Getting Out of Hand: 600,000 Prisoners [per Year] and 60% of Unemployment in Certain Regions Complete Social Tsunami 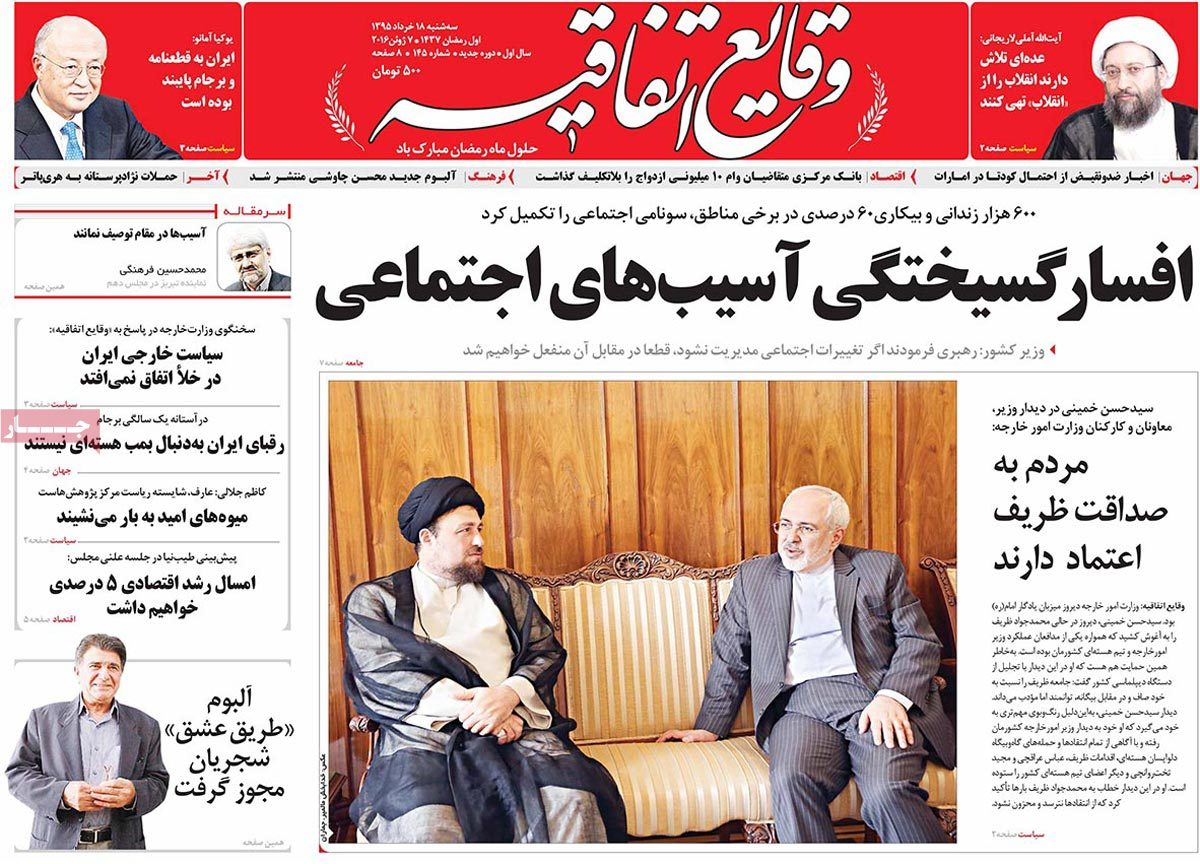 2- If They Had Any Documents, They Would Have Released It in 1979: Analyst on BBC’s Claims against Imam Khomeini 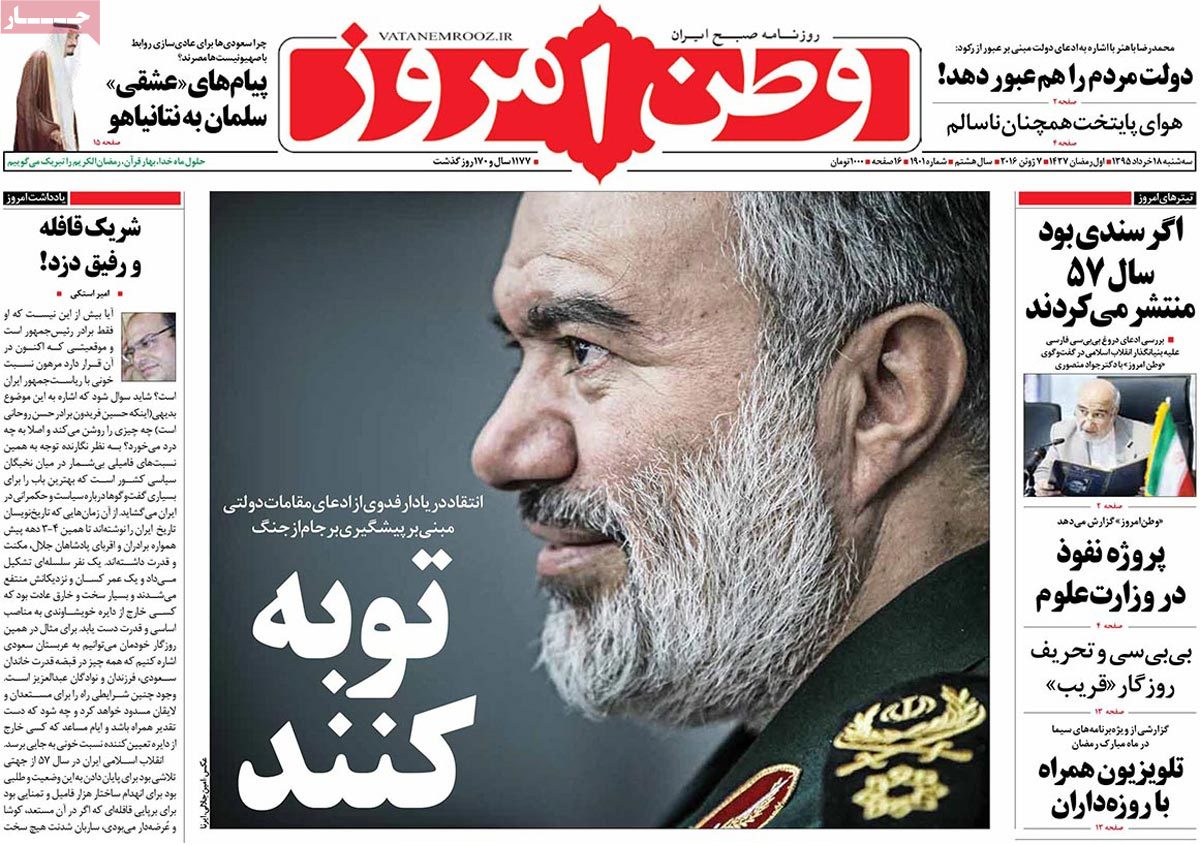