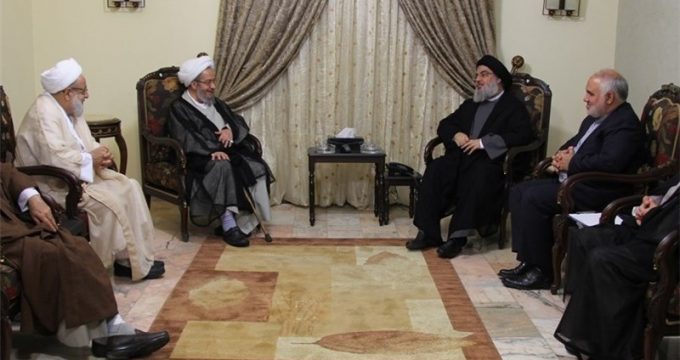 TEHRAN (Tasnim) – A delegation of Iranian clerics representing scholars of the Qom Seminary held a meeting with Secretary-General of the Lebanese Hezbollah Resistance Movement Seyed Hassan Nasrallah, voicing support for Hezbollah in confrontation with the Tel Aviv regime and Takfiri terrorists.

On behalf of the clerics at the Qom Seminary -a top religious school in Iran- the visiting delegation reaffirmed support for Hezbollah and its strong leadership in the face of threats and acts of aggression.

The Iranian team also praised the Hezbollah forces for their devotion to duty in combating the Zionist and Takfiri plots.

For his part, Nasrallah thanked the Iranian delegation for the message of support, saying Hezbollah takes pride in the Qom Seminary’s stances, and its fatherly role and backing for the advocates of justice around the world.