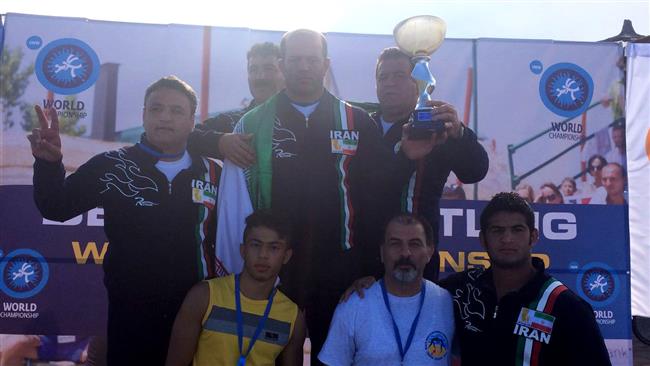 On Saturday, Iran’s Reza Aghajani downed an opponent from Estonia in the final bout of men’s 70-kilogram category in Croatia’s western coastal town of Fažana, and claimed a beach wrestling gold medal.

The Iranian wrestler had earlier defeated Greece’s Georgios Seitaridis and a representative from Romania in his march to the final contest.

The development came on the same day that Payman Heidari won a gold medal for Iran, after overwhelming a contestant from Norway in the final bout of men’s 80-kilogram class.

The Iranian wrestler had initially routed his Norwegian and Croat rivals.

Also on Saturday, Mohsen Seir overwhelmed his Croat opponent in the final competition of the men’s over 80-kiloram class, and was awarded the gold medal.

The 2016 Beach Wrestling World Championships started in Fažana, Croatia, on June 3, and will finish on June 5.

Senior competitions are scheduled to take place on Sunday evening.