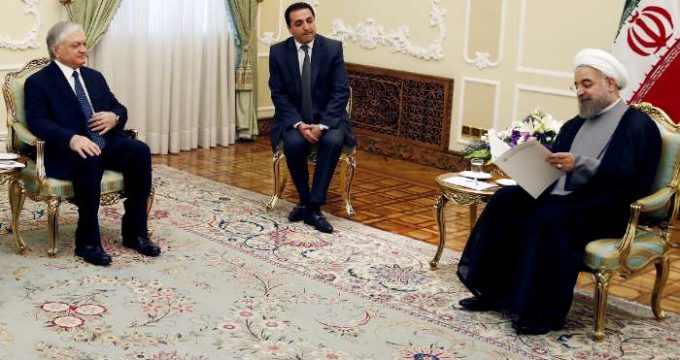 “Today, in the post-sanction period, a good opportunity for expanding trade and economic relations has presented itself to Iran and Armenia, and we should make the best of this opportunity to further promote the level of our bilateral cooperation in all areas,” President Rouhani said.

He went on to add, “we have the opportunity to connect the Black Sea to the Persian Gulf through Armenia and for this end, are ready to provide Yerevan with technical and engineering services.”

President Rouhani further called for the establishment of security and stability in the region and peaceful settlement of regional conflicts, stressing that the Islamic Republic would spare no effort in extending help to the countries in the region.

“In today’s turbulent situation in the region, it is imperative for us and regional countries to boost cooperation and friendship so that small issues would not turn into new pretexts for terrorist activities,” Rouhani noted.

The Armenian foreign minister, for his part, said his country is keenly interested in cementing all-out relations with Iran, saying “the implementation of Iran nuclear deal has created perfect conditions for strengthening the two countries’ relations and promoting regional peace and stability.”

At the end of the meeting, an MoU on waiving visa requirements for the visitors of both countries was signed by Iranian Foreign Minister Mohammad Javad Zarif and his Armenian counterpart.