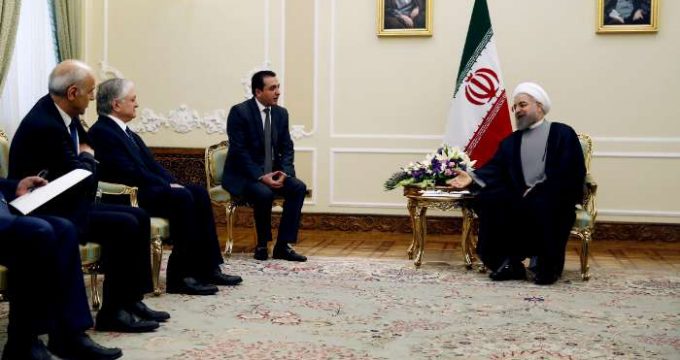 He made the remarks in a meeting with Armenian Foreign Minister Edward Nalbandian.

Iranian and Armenian people are willing to develop and consolidate relations in all areas, Rouhani said.

The Islamic Republic President hailed cooperation between Iran and Armenia in various sectors, including economy, culture, trade, energy, transit of goods, transportation and tourism and called for promotion of ties between the two states in all areas in the post-sanctions era.

Iran is willing to help connect the Black Sea to the Persian Gulf through Armenia, Rouhani noted.

He underlined that Iran and Armenia share similar stances towards regional and international developments adding that the Islamic Republic is looking for a peaceful resolution to the regional conflicts.

Iran will do its best to support regional states to establish peace and stability, the President said.

In the face of unfavorable conditions in the region, countries should increase cooperation and prevent manipulation of unimportant disagreements between regional states by the terrorists, he added.

Armenian foreign minister for his part conveyed the written message of the Armenian president to Rouhani and said Yerevan is interested in consolidation of all-out ties with Iran.

Nalbandian then referred to the joint ventures between Tehran and Yerevan in various fields including infrastructure, energy and transportation and said the ground is now ready for boosting bilateral ties and cooperating on peace and regional security .