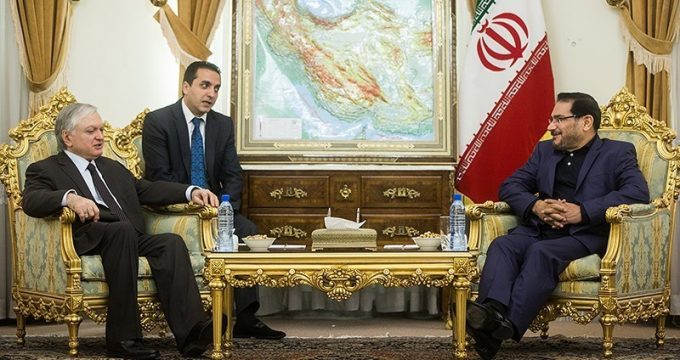 “The international community should denounce the unconstructive behavior of certain regional states which help start the fire of war and conflicts with their financial, training and arms support for the terrorist groups and adopt punitive measures against them,” Nalbandian said during the meeting in Tehran on Monday.

Shamkhani, for his part, appreciated Armenia for its clear stances against Takfiri terrorism, and said, “Terrorism and the Zionist regime’s explicit and implicit interferences are meant to spark the fire of territorial differences among the regional states in a bid to stir insecurity and instability in the region and increase the security level of the Zionist regime.”

In a relevant development last year, the Iranian legislature in a statement had condemned the ISIL crimes, and stressed that those states which have created and supported the terrorist group should account for its crimes as well.

“Now, the US and western governments and the regional sheikhdoms (Persian Gulf Arab states) which have created and strengthened the killer group should account for” its crimes, the statement said.

“We insist the international human rights organizations to launch investigation with regard to those governments which have played a role in the creation of these terrorists to take proper action against them,” it added.

The statement underlined that the killing of Muslim students in the US, Christian workers in Libya, Sunni Muslims in Iraq, Izadis in Erbil and Shiites in Pakistan and Yemen are all parts of a purposeful plot by the Zionist regime which has been hatched to stir a global religious war.