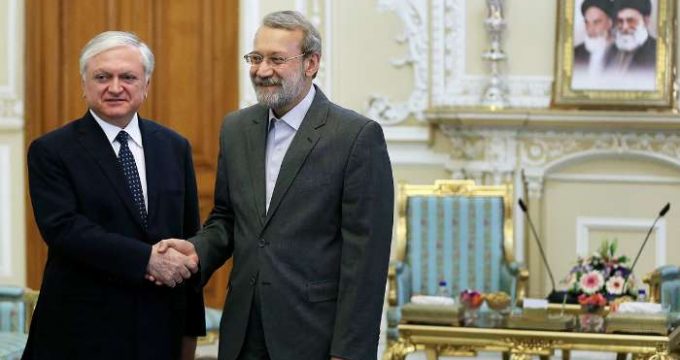 Larijani made the remarks in a meeting with visiting Armenian Foreign Minister Eduard Nalbandyan.

Iranian companies can play significant role in broadening economic ties between the two countries, he said.

Expansion of parliamentary ties and cooperation would lead to more interaction and broaden relations between the two sides, he said.

The stand adopted by Iran and Armenia on regional developments is very close, Larijani said.

Under the current circumstances, expansion of terrorism in the region is very apprehensive and all should help adopt unified stand to thwart menaces of terrorism, he said.

The issue of Karabakh should be resolved through political negotiations and diplomatic means, Larijani said.

The Armenian foreign minister said that the Armenian government welcomes membership of the Islamic Republic of Iran at Eurasia Union.

Nalbandyan said that Tehran and Yerevan relations are very broad-based and friendly.

Referring to his meeting with President Hassan Rouhani on Sunday, he said in the meeting the Iranian president underlined that resolving the issue in Karabakh would be by peaceful means away from military conflict.

Armenian government backs joining of Iran to Eurasia which can help broaden relations among the member states, he said.

Some 51 documents have been inked between the two governments including visa waiver signed on Sunday which play vital role in broadening economic relations between the two countries, Armenian foreign minister said.

Expansion of cooperation on transport, energy, culture, sanitation and environment are of prime importance, he said.