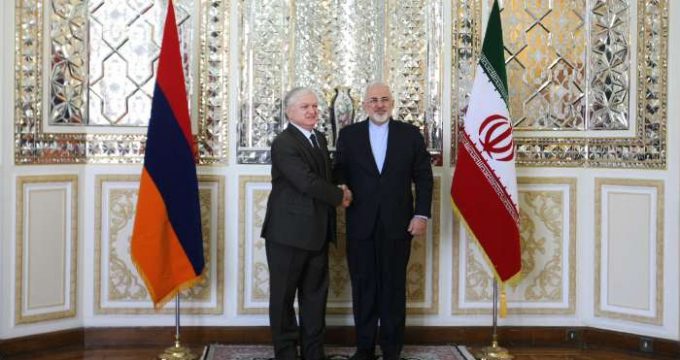 In a meeting with his Armenian counterpart in Tehran on Sunday, Zarif made a reference to Tehran’s call on Armenia and the Republic of Azerbaijan to show restraint in the wake of eruption of clashes in the Nagorno-Karabakh region in April, stressing that Iran is prepared for any effort to ensure regional peace and security.

He also noted that Iran and Armenia can promote cooperation within the framework of international organizations.

Highlighting the positive results of Tehran-Yerevan cooperation in regional economic bodies, such as the Eurasian Economic Union (EEU), Zarif expressed the hope that closer bilateral ties would contribute to economic development and welfare for the entire region.

He further called for efforts to boost economic relations with Armenia in different fields, including gas and electricity trade and railroad industry.

For his part, Eduard Nalbandyan praised Iran for its constructive efforts aimed at helping to settle the Nagorno-Karabakh conflict and its insistence on peaceful approaches, describing the Islamic Republic as “a major country and an important player in regional affairs.”

The Armenian diplomat hoped that the OSCE Minsk Group would tap into Iran’s role for the establishment of peace.

Nalbandyan further described a lasting nuclear deal between Iran and six world powers as the most important political event in 2015, saying the accord can serve as a model for the settlement of conflicts.

He also voiced Yerevan’s readiness to stimulate trade interaction with Iran and encourage Armenian investors to come to Iran.

Nalbandyan’s visit to Iran comes against the backdrop of growing international interest in trade ties with Iran since Tehran and the Group 5+1 (Russia, China, the US, Britain, France and Germany) finalized the nuclear accord on July 14, 2015 and implemented it on January 16.