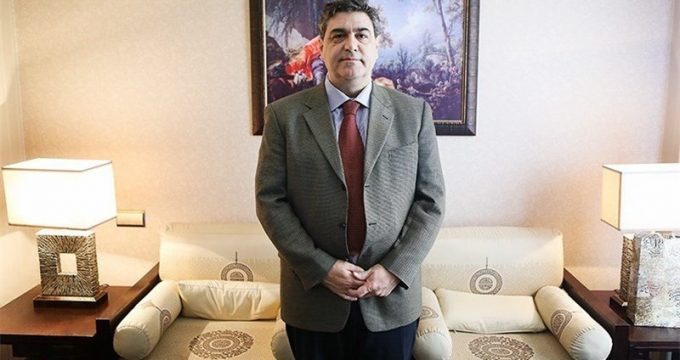 US behind Int’l banks’ hesitation to return to Iran market: Portuguese deputy FM

TEHRAN (Tasnim) – Portugal’s deputy foreign minister said statements by the US Treasury Department on restoration of ties with Iranian banks are “not so clear”, stressing that they need to be clarified as they are making European banks tentative to rekindle ties with Iran.

“The nuclear deal was really the trigger to have the sanctions being lifted and to create completely new idea about Iran in terms of perception from Western public opinion. That obviously paved the way for companies and the entities that finance companies to consider Iran as a great potential market as it is in many different ways. Without the nuclear deal, that would not have been possible,” Jorge Costa Oliveira said Tuesday in an interview with the Tasnim News Agency in Tehran. He further said there are still two obstacles in the way of reengaging with Iranian banks, namely the issue of reconnection of the banks with SWIFT, the global provider of secure financial messaging services, as well as a US-made “inhibition” which is scaring international financial entities away from Iran.

“Actually, we have two problems there: one is a problem of internal organizations of Iranian banks that has been referred to us in many meetings. I mean the fact that the Iranian banks were outside the world financial system for approximately 8 to 10 years. Even if there is a great willingness to have financial flow between many European banks and Iranian banks, it is technically difficult to do it… the other issue is the matter of time and it is a matter of speed and resources putting to do that. Iranian banks want to do it and European banks want to do it (as well). So it will be done. It is a technical issue about SWIFT and so on. It is not nothing complicated, but it needs to be done.

“The second thing which is not so easy is the issue of inhibitions arising from the so-called primary sections. It is a fact that although sanctions are lifted, there are still some statements especially by the US Treasury Department that are not always so clear and that has created some inhibitions in some European banks and we need to clarify those inhibitions. Without those inhibitions being clarified, it will not be possible really to expect banks to move steadfastly. I mean banks all over the world are very prudent and if there is even a small risk or perception of small risk, they feel scared. So what we need to do is to clarify the situation in a way that allows banks not to be scared and allows them to operate confidently when dealing with Iran. This is what needs to be done in the short term.”

In relevant remarks also on Tuesday, Iranian Foreign Minister Mohammad Javad Zarif said there is a “psychological barrier” in trade with Iran, stressing that Washington should give international banks reassurances that they can resume business with the Islamic Republic.

Speaking to reporters during his visit in Helsinki, Finland, Zarif called on Washington to do more to assure banks that they can do business with Iran following the removal of anti-Tehran sanctions.

Tehran and the Group 5+1 (Russia, China, the US, Britain, France and Germany) on July 14, 2015 finalized a comprehensive nuclear deal and started implementing it on January 16.

The agreement, known as the Joint Comprehensive Plan of Action (JCPOA), terminated all nuclear-related sanctions imposed on Iran.

Zarif said that international banks remain wary of US regulations and need reassurances that they can resume business with Iran.

“Some European countries, even European banks, continue to be concerned about retribution by the United States. I believe that (in) the United States, they need to go further in order to provide reassurances to the banks that this will not take place,” he went on to say.