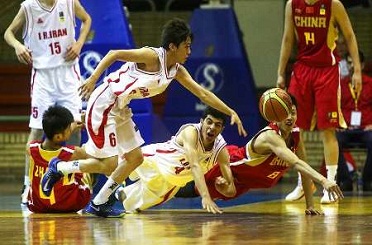 The Iranian squad opened the game in a dominant fashion and racked up most of the points to outscore the Lebanese 20-15 at the end of the first quarter.

Lebanese basketball players came from behind in the second quarter, and managed to level the score at 16-16.

The Iranian sportsmen retook the lead in the third quarter, and widened the gap with diverse attacks and blocks to end the period 28-20.

The Iranians tried not to relinquish their superiority after the break. The Lebanese athletes were stronger, though, and eventually dominated the fourth quarter and won it 24-17.

The 16th edition of West Asian Basketball Association (WABA) Championship started in Amman, Jordan, on May 30 and will run through June 3.

The tournament has brought together teams from Jordan, the Islamic Republic of Iran, Lebanon, Iraq and Syria together.

The Iranian national basketball team is preparing for the 2016 FIBA World Olympic Qualifying Tournament, which is slated to be held between July 4 and July 9 at the multi-purpose Pala Alpitour indoor sports arena in Turin, Italy.