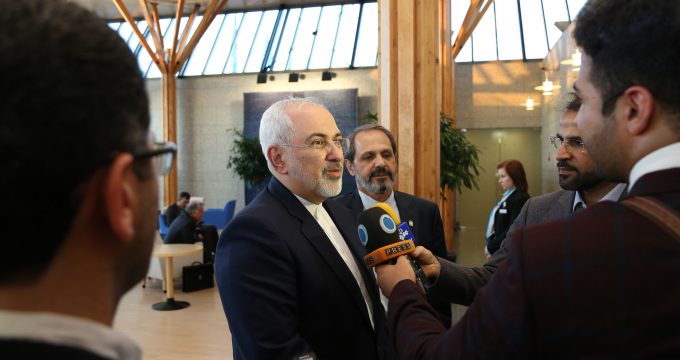 HELSINKI, May 31 (MNA) – Iran’s FM Zarif upon arrival in Finland early Tue. said he will attend a political meeting in Helsinki where he will discuss regional issues with the Finnish senior officials.

“We have begun political talks and expansive economic relations with Finland since the visit of Finnish delegation to Iran,” Zarif told reporters upon his arrival in the Finnish capital.

He went on to add, “a very good connection has been established between Iran and Finland’s private sectors and the expansion of this kind of cooperation is one of our plans during the visit.”

The Iranian foreign minister noted that he will attend a political meeting that is slated to be held in Helsinki Tuesday, adding “the meeting is the recent initiative of the Finnish government which examines the possibility of dialogue in our region.”

“In the 80s, Iran submitted a proposal to the Secretary General of the United Nations about regional talks, and the outcome is mentioned in paragraph 8 of Resolution 598,” Zarif said.

The top Iranian diplomat went on to add, “during my term at the Foreign Ministry, I wrote several articles for regional newspapers and The New York Times in which I raised the significance and necessity of forming an assembly for regional dialogue in the Persian Gulf.”

Zarif is scheduled to hold bilateral meetings with his Finnish counterpart Timo Soini, President Sauli Niinistö, as well as a number of other officials. He is also slated to participate and deliver a lecture in Iran-Finland Joint Economic Commission’s meeting.

Zarif will depart for the Swedish capital Stockholm Tuesday night after intensive meetings and lectures in Helsinki.