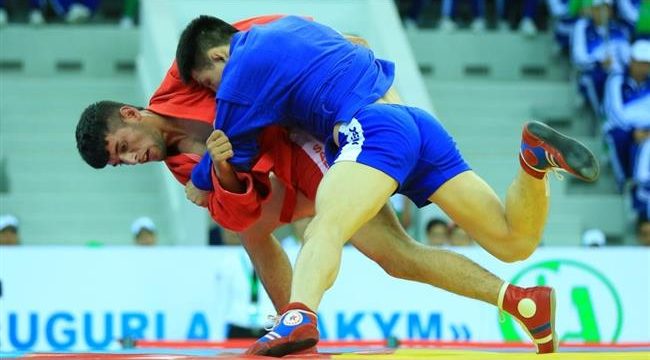 Iranian Sambo practitioners continue their fine performances at the 2016 Asian Sambo Championship in Turkmenistan and pocketed three more medals, including one gold.

On Sunday, Behnam Hodhodi Abkenar outmuscled Uzbek contestant Olim Khudaykulov 4-0 and fetched the senior gold medal for the Islamic Republic of Iran in the over 100-kilogram weight class at the Ashgabat Olympic Complex.

Earlier in the day, Zaman Taghizadeh prevailed over Shakhriyor Gafforov from Uzbekistan 3-1 in his repechage, and snatched a bronze medal.

Previously, Hossein Tolou’ Sabouti suffered a 7-0 defeat at the hands of Uzbek opponent Ozodbek Bakoev in the final bout of the men’s youth over 87-kilogram weight category at the Ashgabat Olympic Complex and was awarded a silver medal.

The 2016 Asian Sambo Championship kicked off in Ashgabat, Turkmenistan, on May 26 and concluded on May 30.

Turkmenistan topped the medal count table with a total of 66 (21 golds, 26 silvers and 19 bronzes), and Uzbekistan stood second with 55 (20 golds, eighteen silvers and seventeen bronzes).

The Islamic Republic of Iran finished in the fifth place, having earned one gold, one silver and eight bronze medals.

Sport Sambo is stylistically similar to Olympic Freestyle Wrestling or Judo, but with some differences in rules, protocol, and uniform.

Combat Sambo resembles modern mixed martial arts, including extensive forms of striking and grappling.  It was developed for military purposes.

Freestyle Sambo, which was created and debuted by the American Sambo Association (ASA) in 2004, focuses on throwing skills and fast ground work, and does not allow any strikes.