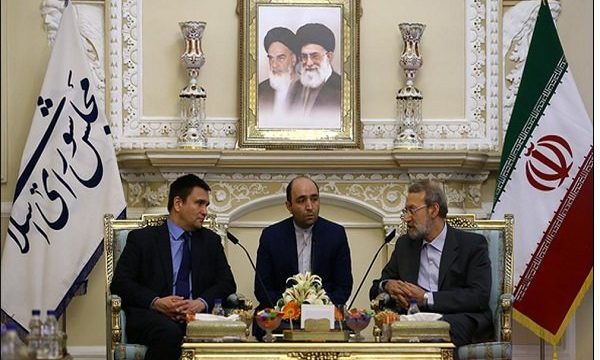 TEHRAN, May 30 (MNA) – Interim Speaker of the Parliament Ali Larijani said Americans change their position so fast that nobody can count on their promises.

Ukraine cannot expect help from the US, since it is not trusted and in different periods it has proven no one can rely on its words, Larijani said in a meeting with Ukrainian Foreign Minister Pavlo Klimkin here on Sunday.

Pointing to the role of parliamentary friendship groups in strengthening the relationship between the two countries, Larijani said efforts must focus on further activation of the groups.

“In addition to strengthening parliamentary relations, the groups can also have a role in promoting political and economic ties,” he added.

Referring to the 6th Development Plan in the 10th Parliament, Larijani said the project has put more emphasis on the development of the railway network and air transportation upon which Ukraine could invest.

During the meeting, Mr. Pavlo Klimkin, for his part, congratulated Larijani for his re-election as the head of Iranian Parliament and noted that Iran and Ukraine share a lot in historical, cultural and traditional contexts holding also a common understanding over the global and regional developments and events.

“We would like to make efforts to expand economic ties alongside strengthening political relations,” he noted.

Ukraine is a rich country in agricultural production, Klimkin said, however it has a long way towards the desired status, and can now help Iran in the field of exports.

Ukraine has taken several projects in Turkmenistan, Klimkin said, adding the cooperation with Iran is provided in the field of rail network development as well as energy.

Ukrainian Foreign Minister pointed to the difficult situation in Ukraine noting, “we want a united and European Ukraine and 69% of our people are in favor of joining to the European Union.”

“We are trying to reach a steady state in Crimea with funding of various banks of European countries to start restoration of the region,” Klimkin said describing the situation in Crimea deadly and tragic.

Ukrainian foreign minister invited Ali Larijani to pay a visit to Ukraine and stressed that the meeting of the heads of two parliaments would lead to improving of parliamentary, political and economic relations.