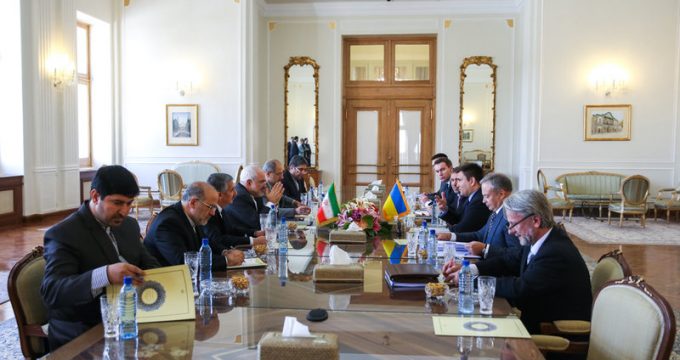 TEHRAN, May 29 (MNA) – Iranian FM Zarif and his Ukrainian counterpart Pavlo Klimkin met on Sun. in Tehran to confer on ways to strengthen bilateral relations and discuss various regional and international issues, including the Minsk Protocol.

“With increasing consultations between the two countries’ officials and facilitating visa issuance for businessmen and industrialists, we hope to see better grounds for the expansion of relations between Tehran and Kiev,” Zarif hoped.

The Iranian diplomat went on to add that Iran’s nuclear deal will have positive outcomes for the advancement of financial transactions between the two countries’ private and state-owned companies.

He further stressed that Iran and Ukraine should bolster bilateral and multilateral cooperation in combating drug trafficking and organized crime.

The Ukrainian diplomat, for his part, said his country is keenly interested in taking new steps toward activation of joint economic commission with Iran by expanding cooperation in power industry, aviation, renewable energies, peaceful nuclear energy, and student transfer programs.

He further presented Zarif with a report on the latest developments in Minsk and his country’s stance on the release of Ukrainian and Russian prisoners, as well as ways to remove obstacles hindering the Minsk Protocol.