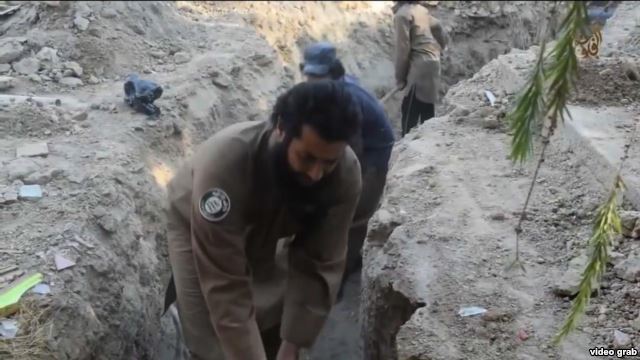 Alwaght- The operation to recapture the ISIS-held city of Fallujah was started on last Monday with an order given by the Iraqi Prime Minister Haider al-Abadi. The military and popular units moved towards the assault sites in Fallujah from the three eastern, southern and northern sides.

At the same time, the word spread that there have been an agreement between the two fighting sides on liberation of the city. The Saudi ambassador to Baghdad has met with Iraqi minister of defense, pledging on behalf of ISIS’ command that the terror group would pull out of the city. In return, Al-Abadi’s government vowed to direct the Fallujah recapture operation with a consideration of ISIS’ “specific conditions.”

At the same time, there are reports claiming the operation to liberate Syria’s Raqqa has started in the north of the province as an outcome of American-Kurdish cooperation, with the US commanding the assault and the Kurdish forces performing the mission. This comes while the Kurds are seen to be unable to start battle with ISIS in Raqqa without designing a convenient fight plan just like that of the Iraqis.

There are some significant points concerning the two operations in Syria and Iraq:

– In Iraq, concerning fight against ISIS two models of operation have been experienced. First, the model in which the Public Mobilization Forces took the initiative in liberation operations of Babil, Salahaddin, Kirkuk and Diyala provinces. Second, the model in which the US air force’s strikes had a hand in liberation of Ramadi city. The first model of operation was launched after provision of accurate data of the whereabouts of the militants of ISIS. In this model the positions of the terror group were brought under Iraqi forces’ fire, and an attack of the places ensued. The last stage was cleansing the areas of the terror militants. In this model, the damage to the civilians, the militants and houses was at a minimum. At least four Iraqi provinces were entirely liberated using this model of recapture operations. Following the operations, the evacuated people returned to their houses.

The second model of recapture operations- implemented in Ramadi- was a heavy bombing process during which the city majorly was reduced to rubble, with “no living thing being able to survive at the operation sites.” In this model, the fatality of the operators is almost zero, however, the civilian tolls could touch 100 percent. Thereby, the US forces, following recapture of Ramadi, have failed to boast of a “liberated city” because there was no sound city left behind.

– As a result of the first and second type recapture operations, the ISIS’ commanders have concluded that they no longer could save their held areas once a recapture operation was launched. So, during the past few months ISIS saw a considerable decline of its combat strength, as there grew divides among the commanders of the terror group. This comes while after arrival of ISIS to northwestern Iraq and northeastern Syria, and after the group reached a kind of stability, due to the long distance of the ISIS-held areas from the Iraqi and Syria capitals, the Iraq and Syrian governments dropped out an immediate battle against ISIS as a priority because in military terms the “crisis” was reduced to a “problem.” Meanwhile, ISIS rose to be Washington’s top priority; why?

– The US Democrat Party has an opportunity until November this year to make a trump card out of “victory over ISIS.” Let’s assume that emergence of terrorism has nothing to do with the American intelligence services and let’s assume that existence of ISIS terrorist group is not dependent on the US logistic supports, but the “anti-terrorism” slogan is American in nature; the question is what has President Barack Obama’s administration done to destroy ISIS’ strength?

In discussion of terrorism in Syria and Iraq, we are in front of two relatively weak and strong camps. The stronger camp is al-Nusra Front which presently holds parts of Aleppo, Daraa, As-Suwayda, Quneitra, and full province of Idlib, though it failed to connect these areas despite a lot of efforts, and to make out of them an encircled area. Limited only to Syria, al-Nusra Front stands in a better position than ISIS in terms of size, quality and the degree of domesticity. It has created tens of active offshoots like Ahrar ash-Sham, Fatah al-Islam, Jaish al-Fatah, Jaysh al-Islam and Faylaq ash-Sham in an array of Syrian regions. The terrorist military alliance has treated the people in a way to help win a relative support of inhabitants of regions under its control. Therefore, it is not easy for the US to take on such a militant group.

On the other side is ISIS which is not multiplied, and all of ISIS is what we see in its official organization. A majority of its fighters are non-natives, with the European nationals bigger in number that the Asians. However, one third of its forces are native Syrians but they are not given command posts. Just unlike al-Nusra Front, ISIS has two large weak spots: existence of hundreds of Ba’athists in its top ranks which have made the group a secular group, and domination of Saudi regime and Turkey over it.

With these descriptions, Obama’s policy to prove success of counter-terrorism policy is completely clear. The US should not take on al-Nusra Front and its affiliates because it is unlikely to make gains, so it must focus on ISIS and its linchpins, namely the Ba’athists, the Saudi dollars and the Turkish intelligence in a bid to show off, through “covert accord and overt combat”, success over terrorism in Iraq and Syria. These days’ Raqqa recapture operation could be decoded and figured out using this American intention.

– As earlier was noted, almost two weeks ago the Saudi ambassador to Iraq met the Iraqi defense minister and said that should the army forces as well as the Public Mobilization Forces accepted not to battle ISIS, he would promise in behalf of the terror group that the terrorists would show no resistance to Fallujah recapture operation. The two sides agreed that the firepower of the Iraqi forces would not exceed three kilometers so that ISIS could gradually prepare Fallujah areas for hand-over.

Since Monday, the day of onset of Fallujah operation from western, southern and northern sides of the city, at least 30 villages were retaken. The Iraqi forces faced no considerable resistance by the terrorist group, and it is exactly for this reason that Iraq’s PM al-Abadi has said that Fallujah would fall to government forces within two days. This comes while Fallujah, larger than the center of Al Anbar province Ramadi, during the past 13 years has stood as a stronghold of terrorism in Iraq. The US military has lost thousands of its troops in the city, but failed to make gains. Also, the Iraqi army has launched over 10 recapture operation, but also met with failure. The question now presents itself: How the Iraqi forces are now moved ahead and confidently talk about defeat of ISIS in Fallujah within days?

In Syria the job is done with the same quality, though with different characteristics. The Syrian Kurds, led by Salih Muslim, are a weak camp and earlier failed to take a major role in liberation of Kobani north of Syria, but now have undertaken a much bigger duty: recapture of Raqqa, a relatively large city and ISIS’ stronghold in Syria.

It is clear that any advances in Raqqa front is not a genuine progress made by military strength, rather, it would be an outcome of US-ISIS deal. The Kurdish fighters of Democratic union Party (PYD) have been given guarantees that there would be no real conflict with ISIS before they approved of launching an operation against ISIS’ hotbed Raqqa

– Even regardless of Democrat Party’s plan for the US presidential election, Washington is weighing up a new scenario for Damascus and Baghdad: operational military presence in Syria and Iraq and shifting from a distant player to a close and active player.

Earlier, the US had made agreement with the Afghan government to station on standby 16,000 US combat forces in such military bases as Bagram Airfield. The same scenario is being followed in Syria and Iraq. If the US manages to set up operational military bases in both Iraq’s west and Syria’s east, which are mostly inhabited by Sunnis, it could, by connecting its military bases from Turkey to India, build a strong cross-border security zone, and more importantly jeopardize and impair the security conditions of other countries, specifically Russia and Iran, all to transform, from an enervating player, into a player holding sensitive positions.

But, are all these simply talks? No, they are right, but the others (the rivals) would not stay actionless until the US scenario is accomplished. Washington’s strategic mistake is that it imagines that others’ hands are tied.