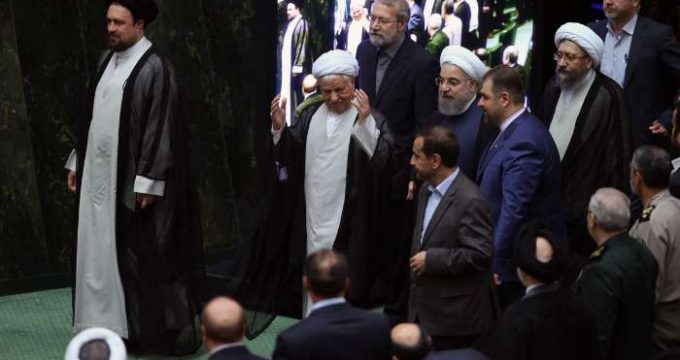 Iranian actor Shahab Hosseini celebrates with Iranian director Asghar Farhadi after being awarded with the Best Actor prize during the closing ceremony of the 69th Cannes Film Festival in Cannes, southern France, on May 22, 2016.

On the occasion of the 34th anniversary of the liberation of the strategic port city of Khorramshahr from Iraqi forces, Leader of the Islamic Revolution Ayatollah Seyed Ali Khamenei attended the graduation ceremony of military cadets of Imam Hussein University in east of Tehran. The opening session of the 5th Assembly of Experts was held on Tuesday morning in Tehran.

Members of Assembly of Experts pay homage to late Imam A number of members of the Assembly of Experts (AE) and its presiding board renewed allegiance to the Father of the Islamic Republic in Iran the late Imam Khomeini.

Supreme Leader of the Islamic Revolution Ayatollah Seyyed Ali Khamenei met here Thursday with members of the Assembly of Experts (AE) as well as the chairman of the body Ayatollah Ahmad Jannati.

Iran’s leader, in his meeting with family of Mostafa Badreddine, gave his ring as a gift to Badreddine’s son, Ali. Iran’s 10th Parliament opened here on Saturday in the presence of Iranian high-ranking officials as well as foreign ambassadors. The fifth Iranian annual art auction has been held last night at Tehran’s Parsian Azadi Hotel with celebrities, collectors and businessmen in attendance. Iranian national volleyball team started the first day of the Men’s World Olympic Qualification Tournament with a 3-0 victory against Australia. After a straight set win over Australia, the Iranian national volleyball team on Sunday won a five set thriller against Canada on the second day of the Men’s World Olympic Qualification Tournament at Tokyo Metropolitan Gymnasium.