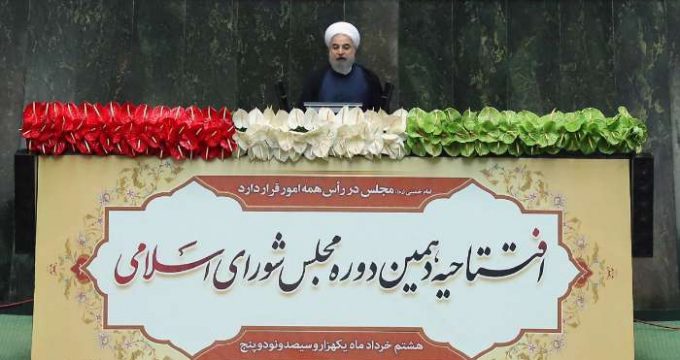 Rouhani: People are for a strong, effective Majlis

Tehran, May 28, IRNA – President Hassan Rouhani said the Iranian nation have been for a strong and effective Majlis over a century.

Parliament is the manifestation of public supervision and people’s sovereignty, President Rouhani said in his address to the inauguration ceremony of the 10th round of Majlis that started work here Saturday.

The nation wants a Majlis that has full power to legislate within the framework of the Islamic principles and national interests, said the President.

All should obey laws, said he, adding that observance of laws can help remove obstacles.

Government and Majlis have separate definite duties, but both have some common functions that should be carried out by standing by each other, he added.

‘To solve the country’s problems, we need interaction,’ said the President, stressing that observance of law is a must.

No group or party has ever sanctioned elections in the country, said Rouhani while referring to massive turnout in February 26 Majlis and Assembly of Experts elections.

No country can achieve an economic boom, unless it has interaction with the world, said the President.