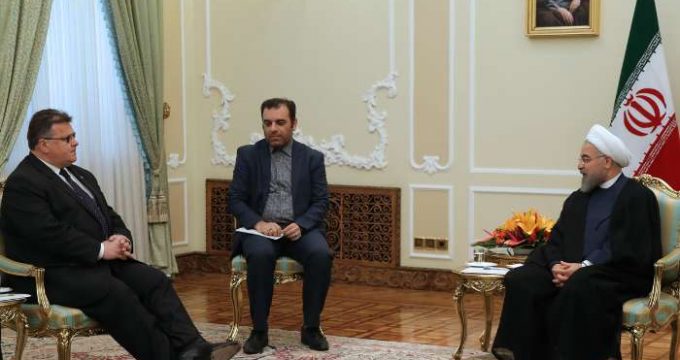 TEHRAN, May 28 (MNA) – While noting that Tehran-Vilnius should cement economic ties, President Rouhani stressed the need for taking a firm stance against terrorist-sponsoring countries.

Iranian President Hassan Rouhani made the remarks in a meeting with Lithuanian Foreign Minister Linas Linkevicius on Saturday in Tehran, adding “Iran and Lithuania enjoy extensive potentials and capacities for developing joint cooperation and should make the most of these opportunities to begin a new chapter in their bilateral ties.”

The President maintained that the areas for cooperation could include modern technologies, academic and research, tourism, fight against terrorism, extremism and drug trafficking.

“Resolution and cooperation among countries is necessary for the fight against terrorism,” Rouhani said. “Certain countries must realize this fact that backing terrorists and using them to advance their own political and regional objectives is not a logical decision and will fail to yield their intended results.”

President Rouhani went on to add, “the first step to take toward fighting terrorism, particularly ISIL, is to identify and stop the elements behind the terrorist groups so that they will not be able to supply terrorists with modern weaponry and financial aids and seize Syria’s oil and plundered antiquities.”

The Lithuanian FM, for his part, stressed that his country is keen on expanding cooperation with Iran in all areas of mutual interest.

Noting his accompanying business delegation, Linkevicius said “Lithuania has a good record in nanotechnology and biotechnology and can share its experiences in these fields with Iran.”

“An economic cooperation agreement and a memorandum of understanding will be signed during the visit between the two countries’ foreign ministries which will facilitate the expansion of bilateral relations,” he said.