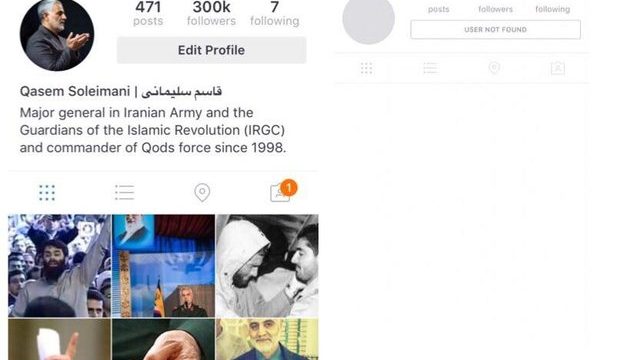 TEHRAN, May 25 (MNA) – Instagram and YouTube have removed an account which published photos and posts about Iranian IRGC Quds Force commander Qassem Suleimani and a channel broadcasting Ayatollah Khamenei’s videos and clips.

The social network Instagram has removed the account which had been followed by more than 320 thousand users without any prior notice or providing any reasons for that.

Meanwhile, YouTube has also very recently removed a channel which published video clips of Ayatollah Khamenei. Trying to reach the channel, Youtube.com/Khameneinews, the websie says the page “has been terminated because we received multiple third-party claims of copyright infringement regarding material the user posted.” The claim comes despite the fact that the channel was publishing videos of Ayatollah Khamenei and there ahs been no so-called infringement of copyrigths.

In another instance, the popular social network among Iranians, had removed a page, @Fightingthezionists, where thousands of Iranians were following and supporting to express their ‘love for fighting Zionism.’ More surprisingly, the page had been recreated and re-followed with numbers at the end of the username but Instagram had removed one after the other. With 5 accounts removed, the latest account is @Fightingthezionists_5.

Another case of censorship on this social network was removal of an account on late Leader of the Isalmic Revolution Imam Khomeini. The page was reopened after massive protests by media and public opinion.

While social media and networks are supposed to support freedom of speech and expression, many cases proves biased approach of their owners toward particular cases. Pages about Hezbollah of Lebanon and its Secretary General Seyed Hassan Nasrallah, as well as accounts for Hashd al-Shaabi, popular volunteering forces fighting against ISIL and terrorists in Iraq, are other examples of such censorships in social networks. Recently, Facebook had admitted that some of its staff had manipulated posts to support a particular political approach in US presidential elections. It came just after some political figures opposed this trend in the social network.