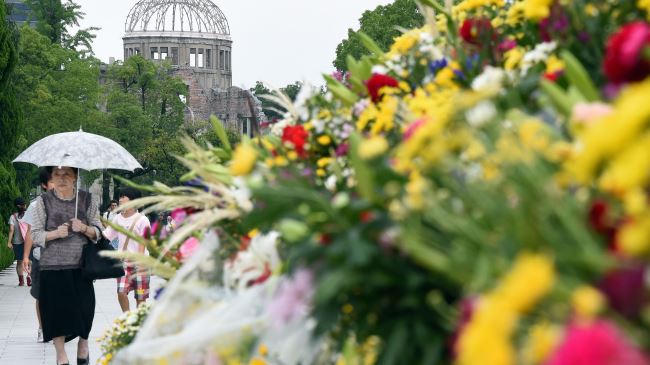 Top 12 reasons the Good War was Bad – Hiroshima in context

Consider this a friendly reminder to President Obama on his way to Hiroshima.

No matter how many years one writes books, does interviews, publishes columns, and speaks at events, it remains virtually impossible to make it out the door of an event in the United States at which you’ve advocated abolishing war without somebody hitting you with the what-about-the-good-war question.

Of course this belief that there was a good war 75 years ago is what moves the U.S. public to tolerate dumping a trillion dollars a year into preparing in case there’s a good war next year, even in the face of so many dozens of wars during the past 70 years on which there’s general consensus that they were not good. Without rich, well-established myths about World War II, current propaganda about Russia or Syria or Iraq would sound as crazy to most people as it sounds to me.

And of course the funding generated by the Good War legend leads to more bad wars, rather than preventing them.

I’ve written on this topic at great length in many articles and books, especially this one. But perhaps it would be helpful to provide a column-length list of the top reasons that the good war was not good.

2. The U.S. government was not hit with a surprise attack. President Franklin Roosevelt had committed to Churchill to provoking Japan and worked hard to provoke Japan, and knew the attack was coming, and initially drafted a declaration of war against both Germany and Japan on the evening of Pearl Harbor — before which time, FDR had built up bases in the U.S. and multiple oceans, traded weapons to the Brits for bases, started the draft, created a list of every Japanese American person in the country, provided planes, trainers, and pilots to China, imposed harsh sanctions on Japan, and advised the U.S. military that a war with Japan was beginning.

3. The war was not humanitarian and was not even marketed as such until after it was over. There was no poster asking you to help Uncle Sam save the Jews. A ship of Jewish refugees was chased away from Miami by the Coast Guard. The U.S. and other nations would not allow Jewish refugees in, and the majority of the U.S. public supported that position. Peace groups that questioned Prime Minister Winston Churchill and his foreign secretary about shipping Jews out of Germany to save them were told that Hitler might very well agree to that but it would be too much trouble and require too many ships. The U.S. engaged in no diplomatic or military effort to save the victims in the camps. Ann Frank was denied a U.S. visa.

4. The war was not defensive. FDR lied that he had a map of Nazi plans to carve up South America, that he had a Nazi plan to eliminate religion, that U.S. ships actually assisting British war planes were innocently attacked by Nazis, that Germany was in fact a threat to the United States. A case can be made that the U.S. needed to enter the war in Europe to defend other nations, which had entered to defend yet other nations, but a case could also be made that the U.S. escalated the targeting of civilians, extended the war, and created more damage than might have been, had it done nothing, attempted diplomacy, or invested in nonviolence. To claim that a Nazi empire could have grown to someday include an occupation of the United States is wildly far fetched and not borne out by any earlier or later examples of other wars.

5. We now know much more widely and with much more data that nonviolent resistance to occupation and injustice is more likely to succeed, and that success more likely to last, than violent resistance. With this knowledge, we can look back at the stunning successes of nonviolent actions against the Nazis that were not well organized or built on beyond their initial successes.

6. The good war was not for supporting the troops. In fact, lacking intense modern conditioning to prepare soldiers to engage in the unnatural act of murder, some 80 percent of U.S. and other troops in World War II did not fire their weapons at the enemies. That those soldiers were treated better after the war than soldiers in other wars had been, or have been since, was the result of the pressure created by the Bonus Army after the previous war. That veterans were given free college was not due to the merits of the war or in some way a result of the war. Without the war, everyone could have been given free college for many years. If we provided free college to everyone today, it would take way more than World War II stories to get people into military recruiting stations.

7. Several times the number of people killed in German camps were killed outside of them in the war. The majority of those people were civilians. The scale of the killing, wounding, and destroying made this war the single worst thing humanity has ever done to itself in a short space of time. That it was somehow “opposed” to the far lesser killing in the camps — although, again, it actually wasn’t — can’t justify the cure that was worse than the disease.

8. Escalating the war to include the all-out destruction of civilian cities, culminating in the completely indefensible nuking of cities took this war out of the realm of defensible projects for many who had defended its initiation — and rightly so. Demanding unconditional surrender and seeking to maximize death and suffering did immense damage and left a legacy that has continued.

9. Killing huge numbers of people is supposedly defensible for the “good” side in a war, but not the “bad.” The distinction between the two is never as stark as fantasized. The United States had an apartheid state for African Americans, camps for Japanese Americans, a tradition of genocide against Native Americans that inspired Nazis, programs of eugenics and human experimentation before, during, and after the war (including giving syphilis to people in Guatemala during the Nuremberg trials). The U.S. military hired hundreds of top Nazis at the end of the war. They fit right in. The U.S. aimed for a wider world empire, before the war, during it, and ever since.

10. The “good” side of the “good war,” the party that did most of the killing and dying for the winning side, was the communist Soviet Union. That doesn’t make the war a triumph for communism, but it does tarnish the tales of triumph for “democracy.”

11. World War II still hasn’t ended. Ordinary people in the United States didn’t have their incomes taxed until World War II and that’s never stopped. It was supposed to be temporary. The bases have never closed. The troops have never left Germany or Japan. There are over 100,000 U.S. and British bombs still in the ground in Germany, still killing.

12. Going back 75 years to a nuclear-free, colonial, world of completely different structures, laws, and habits to justify what has been the greatest expense of the United States in each of the years since is a bizarre feat of self-deception that isn’t attempted in the justification of any lesser enterprise. Assume I’ve got numbers 1 through 11 totally wrong, and you’ve still got to explain how the world of the early 1940s justifies dumping into 2017 wars funding that could have fed, clothed, cured, and environmentally protected the earth.

This article was written by David Swanson for American Herald Tribune on May 23, 2016. David Swanson is an author, activist, journalist, and radio host. He is director of WorldBeyondWar.org and campaign coordinator for RootsAction.org. Swanson’s books include War Is A Lie.

Hiroshima, US May 24, 2016
What behind building Turkish military base in Qatar?
Iran helped Syria hold Daesh back: Soleimani