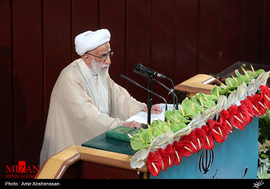 Ayatollah Jannati elected as chairman of Assembly of Experts

Ayatollah Ahmad Jannati, winning 51 votes out of 86, was elected Tuesday as chairman of the fifth Assembly of Experts.

The inauguration ceremony of the fifth Assembly of Experts started here on Tuesday.

Iran on Tuesday started producing military fuses for its missiles and aerial weapons at a new plant.

A delegation from Iranian Hajj and Pilgrimage Organization left for Saudi Arabia for the second round of talks on Hajj.

A detachment of India’s fleet of warships docked in Iran’s territorial waters in the Southern port of Bandar Abbas on Tuesday.

Russian Foreign Minister Sergei Lavrov plans to raise the question of whether Iran should be invited to join the Shanghai Cooperation Organization (SCO) during its upcoming meeting.

Iranian deputy FM said Israel refuses to join the nuclear disarmament and non-proliferation mechanisms posing a serious threat to the regional and international peace and security.

Iran’s Zarif to make official visit to Finland next week

Iranian Foreign Minister Mohammad Javad Zarif will make an official visit to Finland next week to hold talks with senior officials of the country.