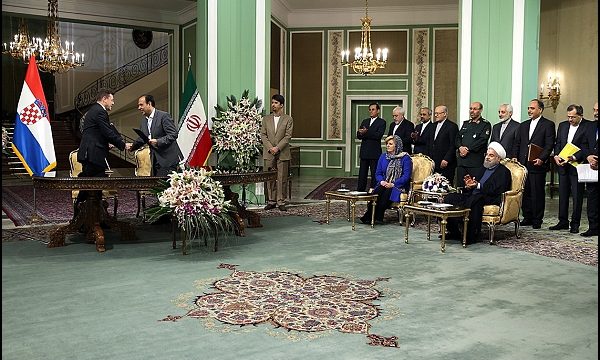 Tehran, May 23, The Iran Project – FM Zarif meeting with Kerry, Hammond, Bishop and Mogherini on implementation of JCPOA in Vienna, Croatian president Grabar-Kitarović trip to Iran, President Rouhani visiting senior clerics in Qom during a rare trip and New Zealand FM McCully visiting Iran dominated the country’s media outlets in the past week (May 17– May 22).

The 4th International Exhibition of Rail Transportation, Related Industries and Equipment of Iran, dubbed RAILEXPO 2016, inaugurates in Tehran in a ceremony attended by Minister of Industry,Trade and Mine Mohammad Reza Nematzadeh and Minister of Roads and Urban Development Abbas Akhundi on May 15.

The closing ceremony of Iranian political romance series of Shahrzad was held in Tehran’s Milad Tower on Sunday. Sanat Naft Abadan fans took to the streets on Monday evening to celebrate their football team’s return to Iran Professional League after three years of absence. Several organizations in Khorasan Razavi Province will commemorate the birth anniversary of the great Persian mathematician, astronomer, philosopher and poet Omar Khayyam on May 17 which is observed as National Khayyam Day.

ISSG meets in Vienna with participation of 20 states, organizations

Meeting of the International Syria Support Group (ISSG) started on Tuesday in Vienna with the participation of 20 states and organizations.

Foreign Minister Mohammad Javad Zarif and his US counterpart John Kerry met in the Austrian capital on Tuesday where they discussed the obstacles on the way of the implementation of Iran nuclear deal – known as the JCPOA. Supreme Leader of the Islamic Revolution Ayatollah Seyyed Ali Khamenei met with instructors, reciters and memorizers of the holy Quran.

Members of Iranian and Croatian delegations signed two cooperation documents Wednesday in the presence of the two countries’ presidents.

The fifth stage of the 31st International Tour of Azarbaijan UCI (Union Cycliste Internationale), Asia 2.1 Road Race begins in northwestern Iran on May 17. After cycling from 180 km from Sarein to Sahand course in West Azarbaijan Province, Iranian cyclist Qader Mizbani ranked first in the competition.

World Cup of Greco-Roman wrestling is undergoing in Shiraz, in southern Iran.

Iran holds The 12th edition of the International Conference on Mahdism Doctrine in the Iranian holy city of Qom.

President Hassan Rouhani met with senior clerics in the holy city of Qom on Friday.

President Rouhani made pilgrimage to Her Holiness Fatima Masumeh’s holy shrine on Friday in Qom.

Iran won the title of the 2016 Greco-Roman Wrestling World Cup on Friday.

Holy Jamkaran Mosque in Qom, historically believed to be established by direct order of the Twelfth Imam (as), has been hosting large crowds of pilgrims coming from around the country. Indian Prime Minister Narendra Modi (CR) is welcomed by Iran’s Economy Minister Ali Tayebnia (CL) as he arrived in Tehran on May 22, 2016.