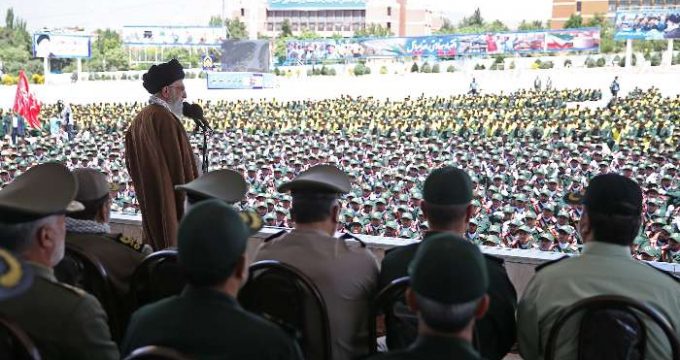 Leader of the Islamic Revolution Ayatollah Seyyed Ali Khamenei says the US hostility against the Islamic Republic stems from Iran’s defiance of Washington’s arrogant policies.

“The main cause of all these enmities and fabrication of pretexts is [Iran’s] defiance of Arrogance (a reference to the hegemonic powers led by the US),” the Leader said while addressing a commencement ceremony for graduates of Imam Hussein Military Academy in Tehran on Monday.

Ayatollah Khamenei was referring to the US hostile stances against Iran’s nuclear program, missile power and human rights record.

“Were the Iranian nation ready to surrender, they (arrogant powers) would have comprised over [Iran’s] missile power and nuclear energy and they would have made no mention of human rights,” said the Leader.

Regarding Iran’s missile program, Ayatollah Khamenei said: “Recently they have embarked on massive [media] hype campaign, but they must know that such hues and cry will have no effect and they cannot do any damn thing.”

The Leader said the US officials have acknowledged that the Iranian nation refuses to submit to the bullying tactics of arrogant powers due to its adherence to Islamic ideology.

Ayatollah Khamenei highlighted “steadfastness”, “defiance of the enemy” and “safeguarding the revolutionary and Islamic identity” as the main factors of the strength of the Islamic establishment and the Iranian nation.

“The Americans and other powers are extremely sad at this issue and they have no other option. That is why they made huge efforts in order to bring the country’s decision-making and decision-taking centers under their control, but they failed and thanks to God they will fail to do so,” noted the Leader.

Ayatollah Khamenei said arrogant powers resorted to every tool in an attempt to “bring the Islamic establishment to its knees and force it into submission” but Iranian people refuse to follow the arrogant powers due to their Islamic beliefs.