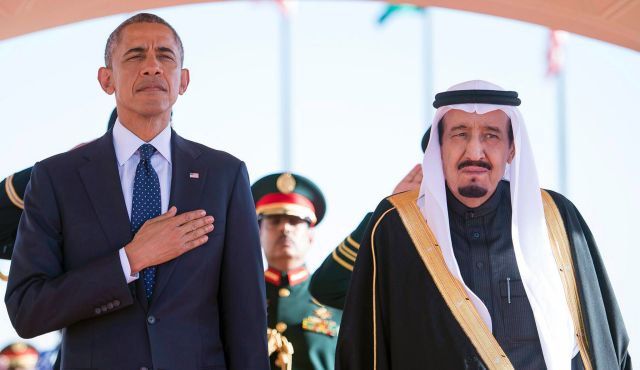 US-Saudi relations under change, their Heyday has gone

Alwaght- The US-Saudi friendship at the present time is not as golden as two decades ago- the good days in which such Saudi princes as Bandar bin Sultan, the former kingdom’s intelligence chief who is known as “Bandar Bush” stepped out of the formality of the diplomatic etiquettes and held warm personal relations with the American officials. To put it another way, in the heydays the two countries cooperated widely in economy, politics and military.

Not long ago, Saudi Arabia also joined the so-called US-led anti-terror military coalition in Syria to illustrate the military intervention in Syria as not a solely Western move. In exchange, Washington has supplied the Saudis with logistics and equipment in their aggression on Yemen.

However, as the time went by the Saudi-American rifts came to surface, reaching a juncture in which the US President Barack Obama called Riyadh the Washington’s “so-called ally.”

A part of the problem comes from the fact that Saudi Arabia under King Salman, who rose to the throne in January 2015, has come up with the notion that the Obama administration is not willing to get involved directly in conflicts in West Asia region.

The US and Saudi Arabia are at odds over a variety of cases including Iran’s nuclear program, Riyadh’s supports for the terrorist groups, Obama’s favor of the Muslim Brotherhood group, the Saudis’ actions in their Yemen war, discords over Syria’s President Bashar al-Assad, Saudi backing and links to 9/11 attacks and Al-Qaeda and also Saudi Arabia’s foundation of religious schools with Wahhabi orientations across the world, especially in poor countries. All these are subjects for heated discussion between the two sides. On top of them is the nuclear deal brokered between Iran and the Western powers and Washington’s commitment to lift all of Iran sanctions, which send the Saudis highly worried. Actually, it is these concerns with American policy shifts that drive Riyadh’s will to play a stronger role in the region.

In fact, the future US president has the duty of deciding whether Saudi Arabia- a hotbed of Wahhabism- could remain US’ friend as before or not. Recently, the pressures built up inside the US, calling for publishing 28 unpublished pages of a report released by the Congress on possible Saudi links to the 9/11 terrorist attacks. Once these documents are published, the US government would be brought under heavy strains for its ties with Saudi Arabia, as recently Saudi Arabia has threatened to sell off its US assets if the Congress passed the 9/11 Bill.

Although the Obama administration sold $95 billion in weapons to Saudi Arabia, there still are gaps between them. The most divisive problem is their difference on transfer of Wahhabism from Saudi Arabia to other places. Wahhabism stands as the major source feeding the radical groups across West Asia. Moreover, the rights groups have lashed out at Saudi Arabia for its inadherence to the international norms of behavior, the most obvious example of which is the kingdom’s war against the neighboring Yemen.

On the other side, Saudi Arabia as the largest crude producer and exporter provides many of Washington’s trade partners in the Far East with needed oil. At the same time, Riyadh after the 1970s has managed to affect views of many Muslims across the world using its propaganda machine, making them wrongly believe that the two holy cities of Mecca and Medina also share their sacredness with the Saudi rulers. The kingdom also could, in critical times, influence such outstanding regional player as Egypt through billions of dollars in aid to Cairo.

In fact, alliance with Saudi Arabia gives the US a chance of holding a sway that Washington would not obtain without Riyadh. It seems that a policy of grumpiness is ongoing now between these old allies and it perhaps prepares the ground for renewed friendship of Washington and Riyadh.

However, Saudi Arabia has unveiled its new economic plan, dubbed Saudi Vision 2030, and odds are it seeks new friends like China.

Riyadh needs more investment, and at the same time it is the largest oil supplier of Beijing. The Chinese oil companies work with the Saudi state oil company Aramco to build new oil refineries, as a couple of Chinese construction companies are contributing to Haramain High Speed Rail Project, which launches a train that connects Mecca to Medina.

In general, eight decades of deep relations have now undergone some transformations. Although they have not fully cut bonds, their deep and strategic ties, influenced by current conditions, are observing some changes.

The US could not leave Saudi Arabia totally alone, because this results in widened gap also with other Arab states of the Persian Gulf region-a gap that could be quickly filled with Russia and China which are also now present in the region. In fact, it is highly risky for Washington to break out with Riyadh. The dynamics of Washington-Riyadh relations are changing as the time goes by, and they witness further transformation in the short run, especially that Saudi Arabia now thinks about redefinition of its ties with Russia. Actually, better relations with Moscow would allow Riyadh to shrug off Washington strains more efficiently. But after US presidential election in November, the US would certainly continue looking at Saudi Arabia as an interests-facilitating operative. The process of change in the two sides’ relations would continue pressing ahead, however.