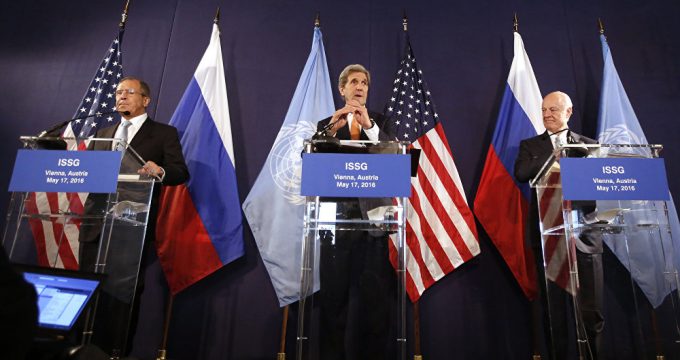 Russian Foreign Minister Sergei Lavrov, US Secretary of State John Kerry and UN envoy to Syria Staffan de Mistura are holding a press conference following a meeting of the International Syria Support Group (ISSG) in Vienna on May 17 to discuss the cessation of hostilities agreement reached in February.

The International Syria Support Group (ISSG) calls on all parties to the Syrian ceasefire to disassociate themselves from Daesh and Nusra Front terrorist groups, US Secretary of State John Kerry said Tuesday.

“We call on all parties to the cessation of hostilities to disassociate themselves from Daesh, al-Nusra,” Kerry said following the ISSG meeting.

All countries taking part in International Syria Support Group (ISSG) meeting have agreed on a framework for a united, non-sectarian Syria, US Secretary of State John Kerry said.

Earlier in the day, foreign ministers of the International Syria Support Group (ISSG) convened for the fifth time in Vienna.

“All of the parties, most importantly Russia, Iran and key regional countries, have agreed on a basic framework of a united and non-sectarian Syria…The challenge now is to transform it into an agreement,” Kerry told reporters at the close of the ISSG meeting.

The sides involved in the Syrian civil war need to reconcile agendas in order the achieve peace in the country, he added.

“Those involved in this conflict with competing agendas need to prioritize peace,” Kerry stressed.

The UN humanitarian agency World Food Programme should start carrying out air drops of humanitarian aid in Syria in case there is no access to the areas in need by June 1, US Secretary of State John Kerry said Tuesday.

“Starting on June 1, if the UN is denied humanitarian access to any of these designated areas [near the Syrian capital of Damascus], the ISSG calls on the World Food Programme to immediately carry out a program for air bridges and air drops for all those areas in need. The ISSG pledges to support such a program and also calls on all parties to provide a secure environment for that program,” Kerry said following the ISSG meeting in Vienna.

The ceasefire in Syria worked out by Russia and the United States took effect on February 27 to facilitate humanitarian access to all besieged areas in the country, among other purposes.

“I consider the main result to be the full confirmation — without any exceptions — of the basis of our work. This is the joint ISSG statement and UN Security Council resolutions 2218, 2254 and 2268,” Lavrov told reporters.

“I would like to point out that we noted progress in all areas,” he added.

“Today’s document confirmed our arrangements of political process in Syria,” Lavrov said. “Violence has decreased since February,” he added.

“We cannot wait too long, we need to keep the momentum. I cannot tell the exact date at the moment… There should be a credible improvement on the humanitarian side and cessation of hostilities side,” de Mistura said.

Humanitarian aid has to be delivered to besieged and hard-to-reach areas of Syria by aircraft if not by land transport, UN Special Envoy for Syria Staffan de Mistura said Tuesday after the meeting of the International Syria Support Group in Vienna.

“If we cannot reach them [besieged, hard-to-reach areas] by land, we need to start working hard on how to reach areas in need,” Mistura said.

The UN envoy added that the decision to launch the World Food Programme’s humanitarian air drops in Syria is “something new” and positive.

Syrian president Bashar Assad should understand that there is no other solution to the crisis in the country except for political one, US Secretary of State John Kerry said Tuesday.

“US always has leverage. But at the moment we have come here because the greatest leverage is that Assad and people will never feel secure without a political solution… Assad needs to understand this reality,” Kerry told reporters after the International Syria Support Group (ISSG) meeting in Vienna.

Moscow is not supporting Syrian President Bashar Assad, but rather the fight against terrorism in Syria, Russian Foreign Minister Sergei Lavrov said.

“John [Kerry] said in his opening remarks, as if this was obvious, that Russia and Iran support Assad. We don’t support Assad. We support the fight against terrorism. As of today, we see no real force that would be more effective than the Syrian army, with all its weaknesses, and the opposition groups we have established contact with through our base in Hmeymim,” Lavrov told reporters.

Russian Foreign Minister Sergei Lavrov said that Russia is concerned by Western tradition to use sanctions in every turn. “Moscow is not supporting Assad, but calls to fighting against terrorisom,” Sergei Lavrov reminded, adding that Russia’s partners admit behind the closed doors that Assad regime poses less threat than terrorists.

“Large numbers of tanks are being sent to Syria. There have been incidents, by the way, where suicide terrorists have used tanks to commit terrorist acts,” Lavrov told reporters, adding that this is “a new development of the crisis.”

There is plenty of evidence pointing out at Turkey setting up a large network to supply Daesh terrorists operating in Syria, Russian Foreign Minister Sergei Lavrov said Tuesday.

“We have talked about it [the network] for a long time because it is obvious that it is the main supply conduit for extremists…there is a stretch of the border, some 90 kilometers [some 56 miles] that is controlled by Daesh militants from the Syrian side and by Turkey from the other side,” Lavrov told reporters following a meeting of the International Syria Support Group in Vienna.

“There are many factors pointing out at a large, widely-spread network created by Turkey on its side side of the border to continue and cover up these supplies,” Lavrov said, adding that Russia had provided the UN Security Council with open source data confirming Turkey’s “illegal and unacceptable” activities in that respect.