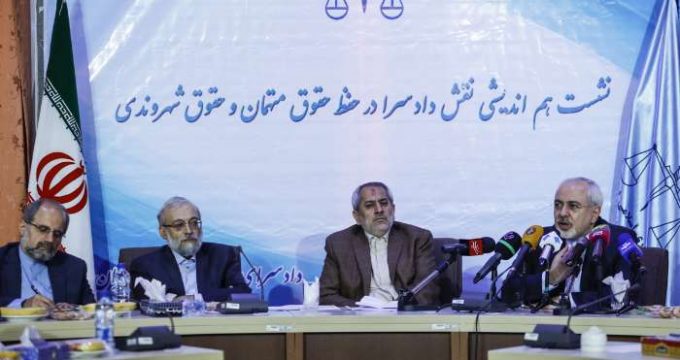 TEHRAN, May 16 (MNA) – Iran’s Javad Zarif has told a conference in Tehran Iran’s security is endogenous, ruling out the need to foreign aid in providing security.

Mohammad Javad Zarif addressed Conference on Role of Court in Protecting the Citizenship Rights on Monday where he believed that the other countries in the region, especially Arab states had been suffering a crisis of legitimacy and had been relying on foreign powers for their national security; “in contrast,” added the FM, “Iran’s security comes from its domestic capabilities and mechanisms which rules out recourse to violence in making political and social demands of the public. A combination of military and economic factors bestow upon a country its power base.”

“Public participation in election provides a pivot of power which shows that the public enjoys security, where people feel they could peacefully make their demands heard by the Establishment and that they should not resort to militancy and violence,” Zarif told the conference.

“This is a reason why our neighbors suffer the lack of security; state in Arab world is now suffering a crisis believed by observers inside it the legitimacy crisis in all Arab states,” Zarif added, expressing gratitude for the Judiciary for its role in providing such security level for the nation; “public now feels it is entitled to its civil rights and could voice their opinions in the ballot boxes; this is part of our national sovereignty; this is seen by the international community and wins for country sovereignty as well,” he asserted.

“Another aspect of power is ideational power, which have been based upon, since the Revolution of 1979 on self-belief, a belief in our own domestic capabilities; we are independent and have an endogenous source of security,” Zarif reiterated his former point, closing his address.