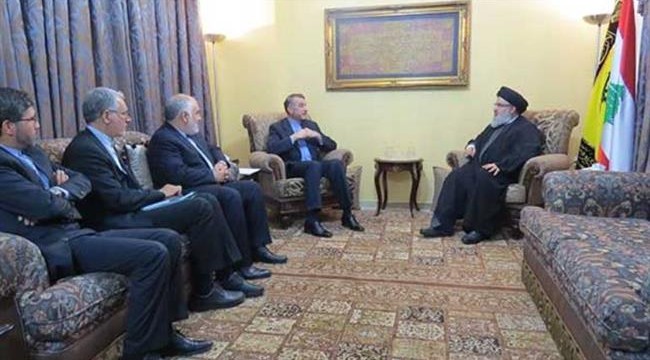 The leader of Lebanese resistance movement Hezbollah has praised the role of martyrs in the battle against the “Zionist regime and terrorism.”

Sayyed Hassan Nasrallah made the comments during a meeting with Iranian Deputy Foreign Minister Hossein Amir-Abdollahian in Beirut on Sunday.

“If it was not for the sacrifice and zeal of resistance martyrs against Zionism and terrorism… there would be no security in the region today,” he noted.

For his turn, Amir-Abdollahian offered his condolences over the recent death of top Hezbollah military commander Mustafa Badreddine.

On Saturday, the resistance movement said that Badreddine had been killed by Takfiri terrorist groups in Syria, adding his death would boost the movement’s resolve to fight the extremist militants.

Hezbollah fighters are combating alongside the Syrian forces against a range of terrorist groups operating in the war-ravaged Arab country, including Daesh and the al-Qaeda-affiliated al-Nusra Front.

Meanwhile, in a message to an international conference held in Tehran on the 68th anniversary of Palestine’s Nakba Day, Nasrallah stressed that the Tel Aviv regime is still the main threat to the region and the Muslim world.

“Certain people feel that Israel is merely a threat to the Palestinians and poses no danger to other governments and nations,” he said, adding, that they were wrong. “All of us should strive to say to the nations that Israel, its goals and threats are still a danger.”

On Sunday, thousands took part in rallies in the besieged Gaza Strip to commemorate the Nakba, or ‘catastrophe’, which is the day Palestinians mark the loss of their homes in the 1948 war that resulted in the creation of Israel and the flight of hundreds of thousands of Palestinians.