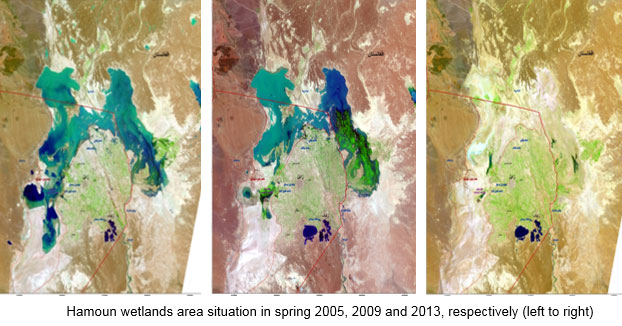 UNESCO to present plaque to Iran on Hamoun Lake registration

United Nations Educational, Scientific and Cultural Organization (UNESCO) in a ceremony in southeast of Iran will present a plaque to the Iranian officials for registration of Hamoun Lake in the World Network of Biosphere Reserves.

Head of Iran’s Department of Environment Massoumeh Ebtekar, Director of UNESCO’s Cluster Office in Tehran Esther Kuisch Laroche and Director of Division of Ecological and Earth Sciences Secretary, Man and the Biosphere (MAB) Programme Han Qunli arrived in this south-eastern Iranian province on Saturday, and are due to attend the ceremony.

The plaque will be unveiled by Ebtekar at Zabol University in a ceremony attended by foreign guests.

As of today, Hamoun will continue living under the supervision of the UNESCO within the framework of the international regulations and cooperation, head of the province’s environment office Saeed Mahmoudi told IRNA.

Hamoun Lake, once a rich natural site, has dried up due to climate change and unkindness of greedy people beyond the borders, Mahmoudi said.

Dryness of Hamoun Lake has caused problems – such as dust storm and drastic heat – for the people of the region, he added.

According to UNESCO, ‘Located in the southeast of the country, the biosphere reserve [Hamoun Lake] includes terrestrial and wetland ecosystems with a total of seven habitat types, including desert and semi-desert areas, as well as Hamoun Lake, with its marshlands and watersheds. The three wetlands of the biosphere reserve are the most important in the region. The area is a hot spot for migratory birds (183 species) and home to 30 mammal species, and 55 plant species. The site is also valuable culturally due to the presence of important historical monuments and ancient temples such as Mount Kooh Khajeh and Shahr-e-Soukhteh.’