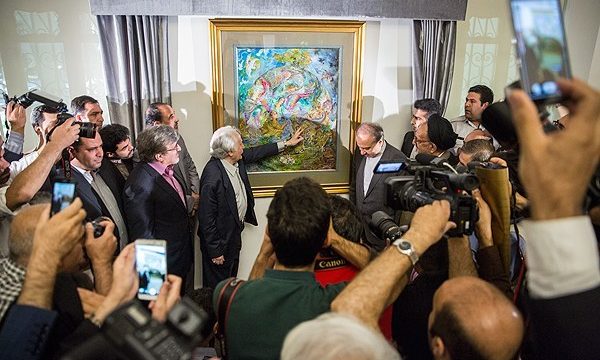 “’Simorgh’ proposed by grand Ayatollah Abdollah Javadi Amoli, is a symbol of the human being and shows  that people are always after the truth,” Farshcchian said at the ceremony.

He added that the idea of his second tableau “Environment, Man and Nature” was initiated last year by the head of Iran’s Department of Environment, Masumeh Ebtekar.

“In one corner of the painting a monster is observed that has polluted everywhere, and on the other side there are angels who are cleaning up the environment,” he explained.

“I believe protecting the environment is quite simple and I truly ask the citizens to love their environment and help preserve it,” Farshchian said.

“Our nature has been hurt and we need to improve it in Iran and around the world,” said Mohammad Mojabi, a top official at the Department of Environment.