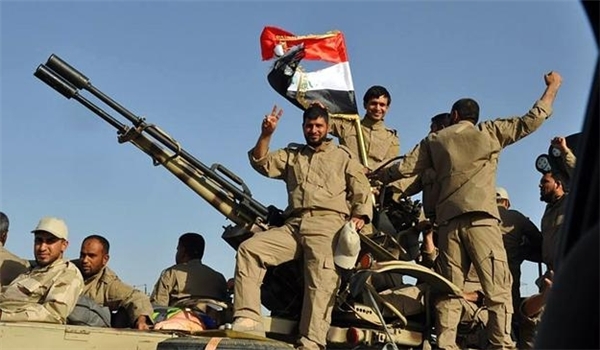 Fighters from Iraq’s Popular Mobilization Units have reportedly killed a commander of the Takfiri Daesh terrorist group wanted for the June 2014 massacre of hundreds of military recruits in the central city of Tikrit.

A security source, speaking on condition of anonymity, told Arabic-language al-Sumaria satellite television network that Iraqi forces engaged Daesh Takfiris close to the Hamrin Mountains, situated 100 kilometers (60 miles) south of the oil-rich city of Kirkuk, on Saturday, killing the high-profile militant commander, identified as Ali Salman but better known by the nom de guerre, al-Azirah, and three of his aides in the process.

The source further noted that Azirah was also responsible for orchestrating the execution of a number of youths from the town of al-Alam, north of Tikrit.

On June 12, 2014, Daesh terrorists killed around 1,700 Iraqi Air Force cadets in an attack on Camp Speicher, a former US base. There were reportedly around 4,000 unarmed cadets in the camp at the time of the attack.

Gruesome violence has plagued the northern and western parts of Iraq ever since Daesh terrorists launched an offensive in June 2014, and took control of portions of Iraqi territory.

The militants have been committing heinous crimes against all ethnic and religious communities in Iraq, including Shias, Sunnis, Kurds, Christians and others.

Iraqi army soldiers and fighters from allied Popular Mobilization Units are seeking to win back militant-held regions in joint operations.