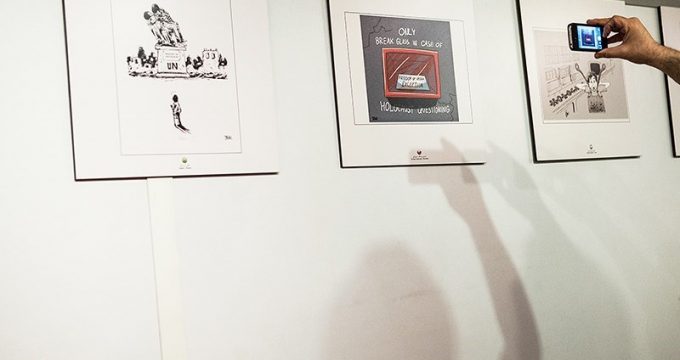 Tehran, May 15, The Iran Project – Iran held a contest on Holocaust cartoons, participated by 150 cartoonists from 50 countries including France, Indonesia, Turkey, Syria, Columbia and Peru in the premises of Arts Bureau in Tehran on Saturday.

Iran says the event was aimed at criticizing Western double standards regarding free expression and not at denying the Nazi genocide.

Grandsons of Salman Hamaida, a 75-year-old Palestinian man who was driven out of the town of Ramla during the 1948 war, play in the rubble of his house on May 14, 2015, which was destroyed during the 50-day Israeli war on Gaza in the summer of 2014, at the Rafah refugee camp in the southern Gaza Strip. ©AFP

Delivering speech at the opening ceremony of the event, contest organizer Masuod Shojai Tabatabaei  said “we have never been after denying of the Holocaust or ridiculing its victims.”

“If you find a single design that ridicules victims or denies, we are ready to close the exhibition, Jews who lost their lives in the Holocaust were subject to oppression by Nazis,” he added.

Elsewhere in his remarks, Tabatabaei depicted the contest as a response to depictions of the Prophet Muhammad by the French satirical magazine Charlie Hebdo and others, saying Western countries have a “double standard” when it comes to free speech.

Some 150 works from 50 countries are on display in the contest and it was organized by non-governmental bodies. The competition opened on May 14 and will continue until May 30. An earlier edition of the exhibition was held in 2006.