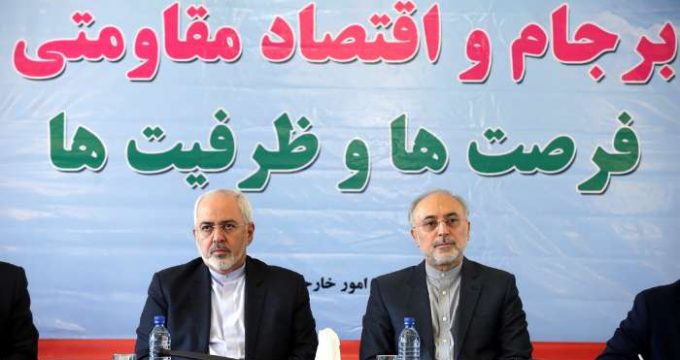 TEHRAN (FNA)- Head of the Atomic Energy Organization of Iran (AEOI) Ali Akbar Salehi announced that the country is seriously improving its nuclear industry with the state-of-the-art technologies.

“We are enhancing the industrial section of Iran’s nuclear activities technologically with modern systems and machines,” Salehi said in Tehran on Saturday, addressing a gathering of Iran’s ambassadors and envoys to foreign states.

He also underlined that the AEOI has been able to establish Iran as an exporter of nuclear products, including heavy water, in the international markets.

“We have improved the country’s situation in the field of the civilian nuclear energy,” Salehi said.

Salehi had announced on Tuesday that his country is holding talks with the Russians to sell them 40 tons of its excess heavy water.

“Negotiations in this regard are underway and (their results) will be announced in due time,” Salehi told FNA.

Also asked about the latest developments in heavy water sales to the US, he said, “The heavy water supply was due to be delivered to the US but we exercised caution after the US blocked $2bln of Iran’s assets (referring to a recent court ruling by the US Supreme Court which authorized the transfer of $2 billion of Tehran’s frozen assets to the families of the victims of a 1983 bombing in Beirut).”

“As long as this issue is not resolved, we will negotiate on ways of payment (for the heavy water supply to the US) and other things in a bid to gain confidence,” Salehi said.

His remarks came after Iranian Foreign Ministry Spokesman Hossein Jaberi Ansari announced last week that Tehran will dispatch its cargo of heavy water to the US only when Washington makes the payment.

“The United States showed an illogical and illegal attitude towards the seizure of Iran Central Bank’s assets under the recent US court ruling and it ruined the Islamic Republic’s trust in the US actions,” Jaberi Ansari told reporters in Tehran.

Noting that the AEOI is responsible for the heavy water contract with the US, he said, “All necessary executive measures have been planned by the Organization to ensure receiving its money and the AEOI will pursue the case in a way that the agreement and contract is implemented properly.”