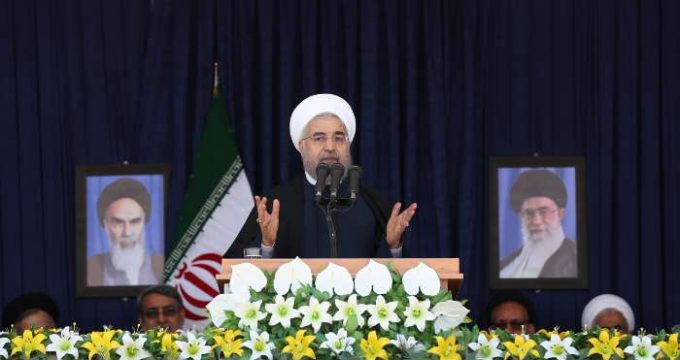 President: people to be informed about seizure of Iran assets

Kerman, May 11, IRNA – President Hassan Rouhani said the nation will be informed on the process which led to seizure of Iran assets by the US.

Talking to reporters at the end of his two-day visit to this southeastern province on Wednesday, he said a report will tell the nation about the actions taken as well as those not taken which led to US blocking of Iranian money.

He said the report will be submitted to the judiciary afterwards.

He said the team he has assigned to make the necessary investigations has already prepared the report on the issue.

He said the US measure was a wrong action which violated relevant regulations so Iran is to take the issue to the International Court of Justice in the Hague.

President Rouhani said Iran regarded the US measure as illegal.

Noting that the Central Bank of Iran is in possession of the country’s exchange reserves, he said that according to law, the CBI is an independent body so the government has no permission to use the CBI resources because they belong to the nation.

However, he explained, Americans made certain decisions in 1996 as to the responsibility of governments according to which they raised some issues pertaining terrorism and Iran which enabled the US courts to have certain regulations about the assets belonging to Iranian government and Central Bank.

Certain warnings were made to the CBI officials then not to put the papers and possessions belonging to the government in disposal of the American banks.

He said at the time when they embarked on accusing Iran for happenings in Lebanon the Iranian officials ought to have taken measures to make Iranian money inaccessible to them.

Unfortunately, the President stressed, the government and the CBI failed to take due action until 2008 when an appeal curt in the US ruled for blocking of the assets resulting in its seizure by Americans.