A Look at Iranian Newspaper Front Pages on May 11

IFP has taken a look at the front pages of Iranian newspapers on Wednesday and picked headlines from 23 of them. IFP has simply translated the headlines and does not vouch for their accuracy.

Iranian newspapers on Wednesday focused on President Rouhani’s remarks on the country’s determination to reclaim its rights in the legal dispute with the US.

They also covered an interview with Gholam-Hossein Mesbahi Moqaddam, a member of parliament, who has revealed a controversial nuclear report by former president Mahmoud Ahmadinejad to the Supreme Leader.

Another top story was the statements by Atomic Energy Organization of Iran (AEOI) Chief Ali Akbar Salehi, who said the country will proceed with caution in dealing with the US, particularly the sale of heavy water to Washington.

1- Rouhani: Report to Be Published on Negligence of Certain People in Seizure of Iran’s Assets

2- Iran to Exercise Caution in Selling Heavy Water to US: Salehi 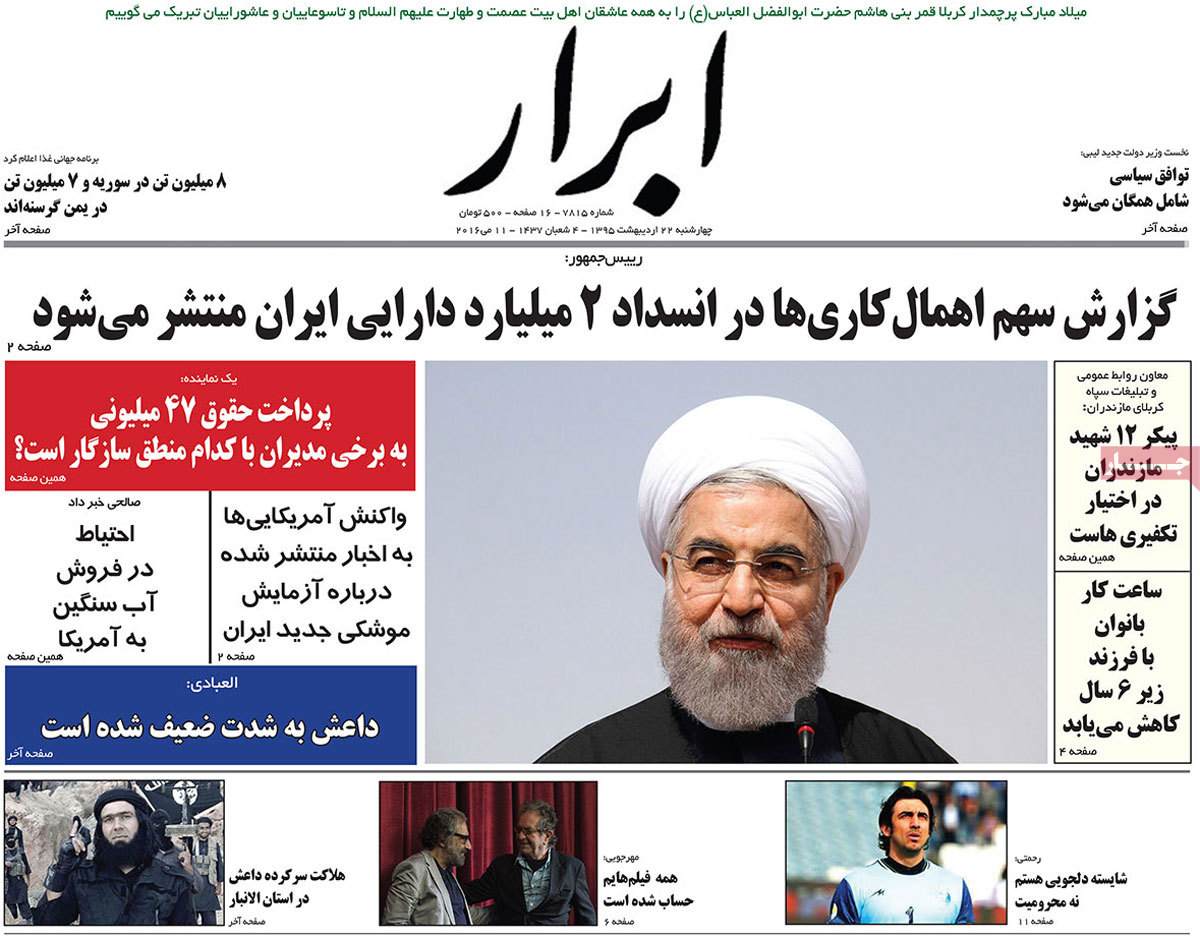 1- Iran to Exchange Its Crude Oil with Switzerland’s Petrol 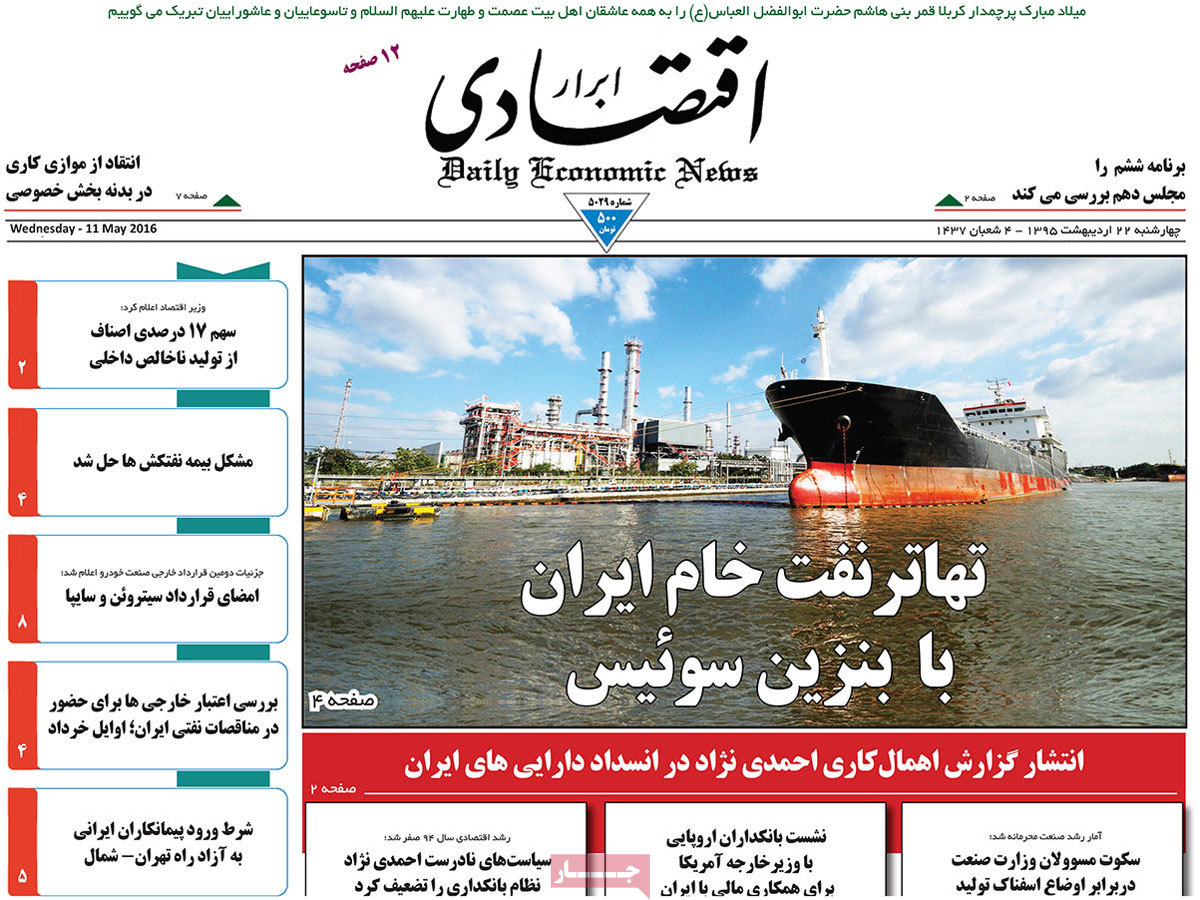 2- 10% of Abortions Performed on Parents’ Will 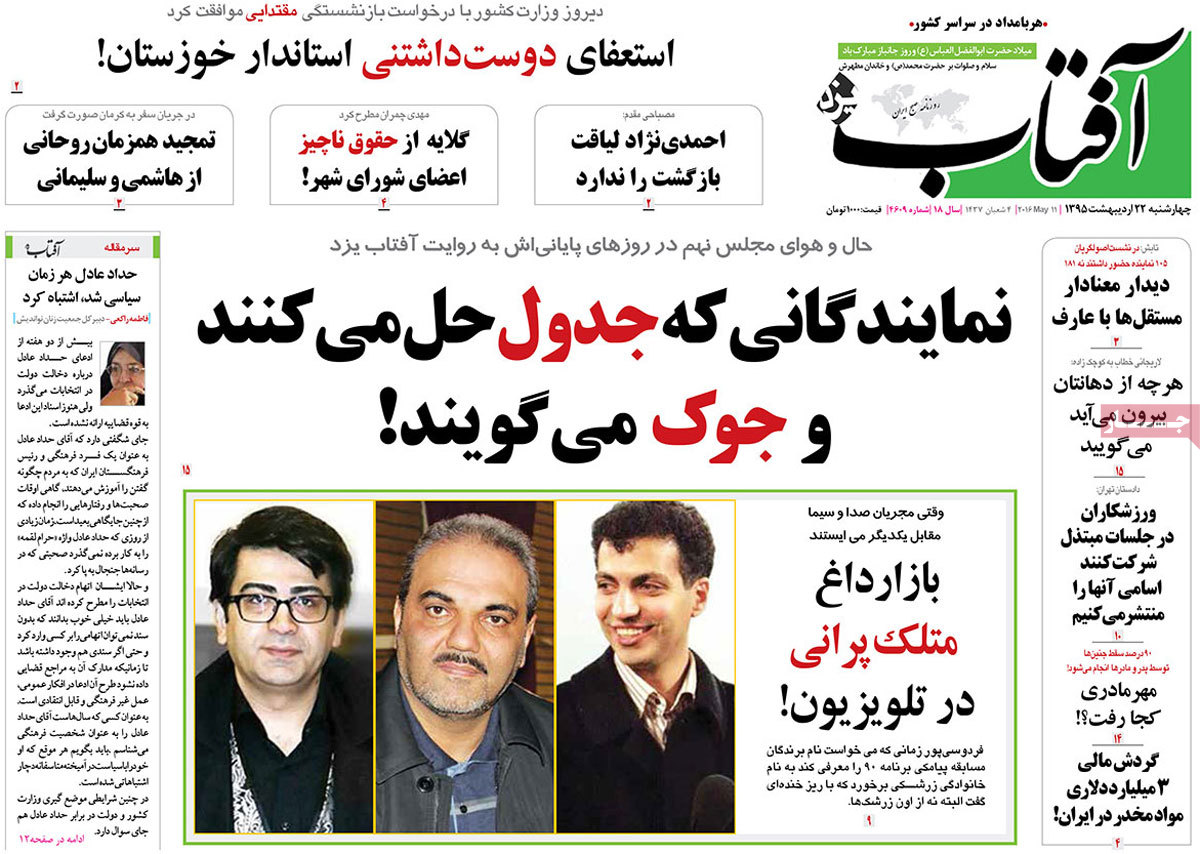 1- Victims of Abortion 15 Times More than Those of Car Accidents: 220,000 Illegal Abortions per Year in Iran

2- IRIB Keeps Silent on Speculations about Change of Its Chief 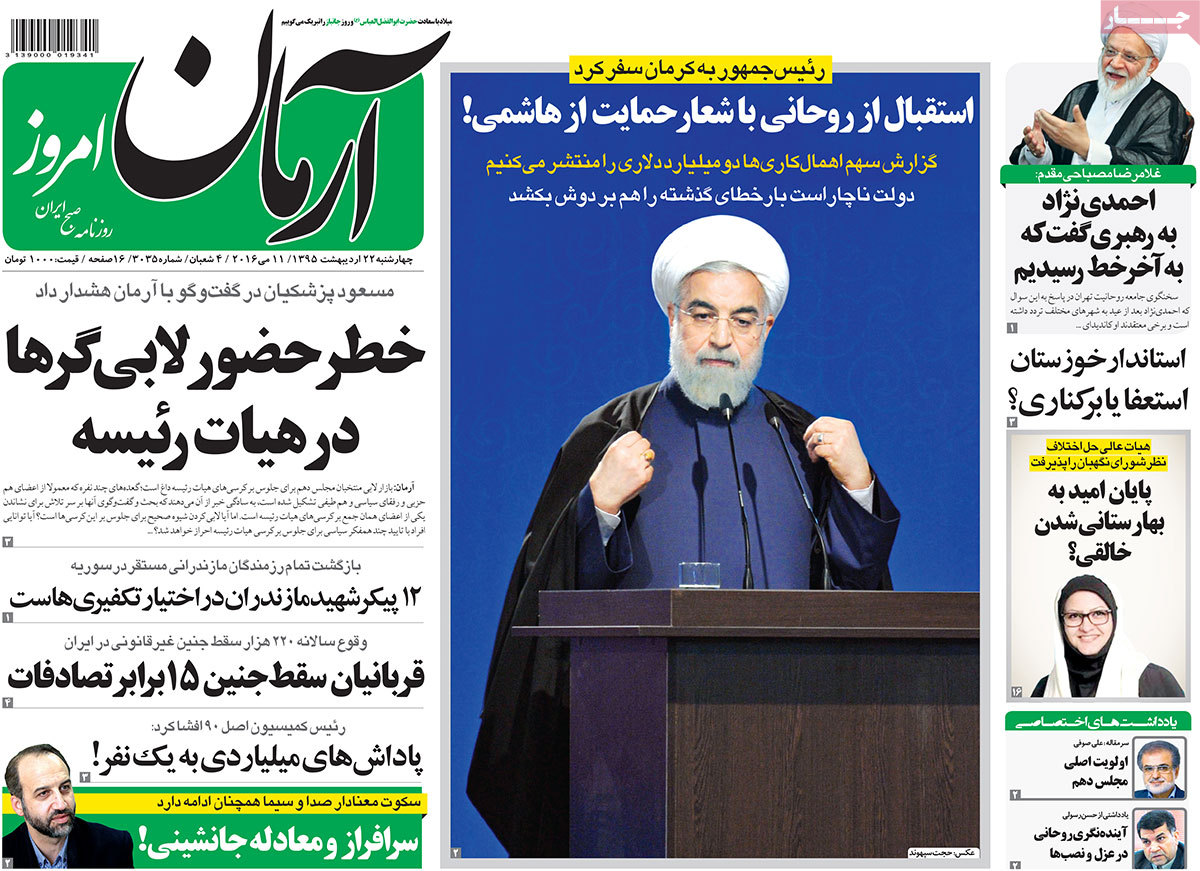 1- John Kerry to Convince European Bankers into Cooperation with Iran

5- JCPOA, a Model for Interaction 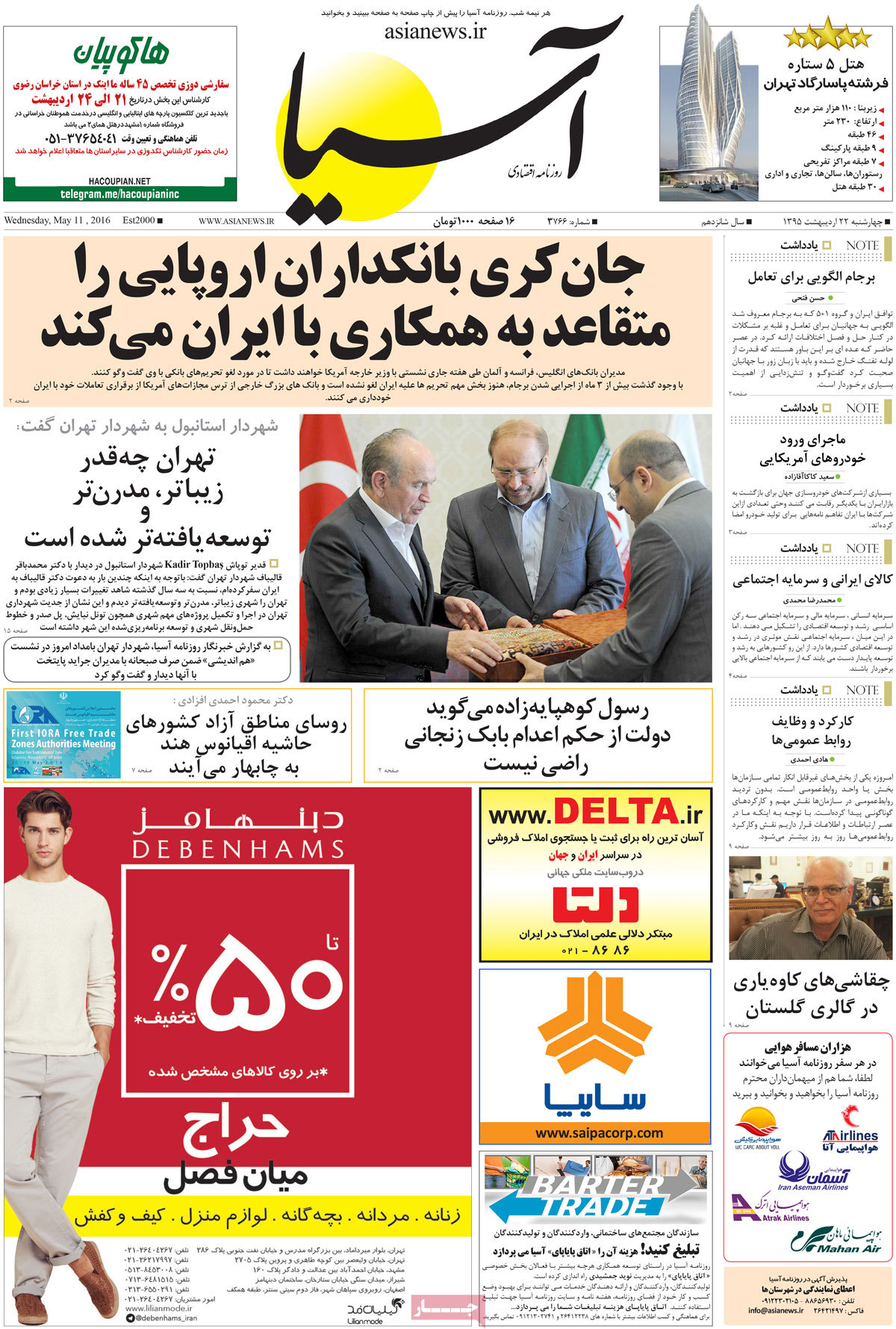 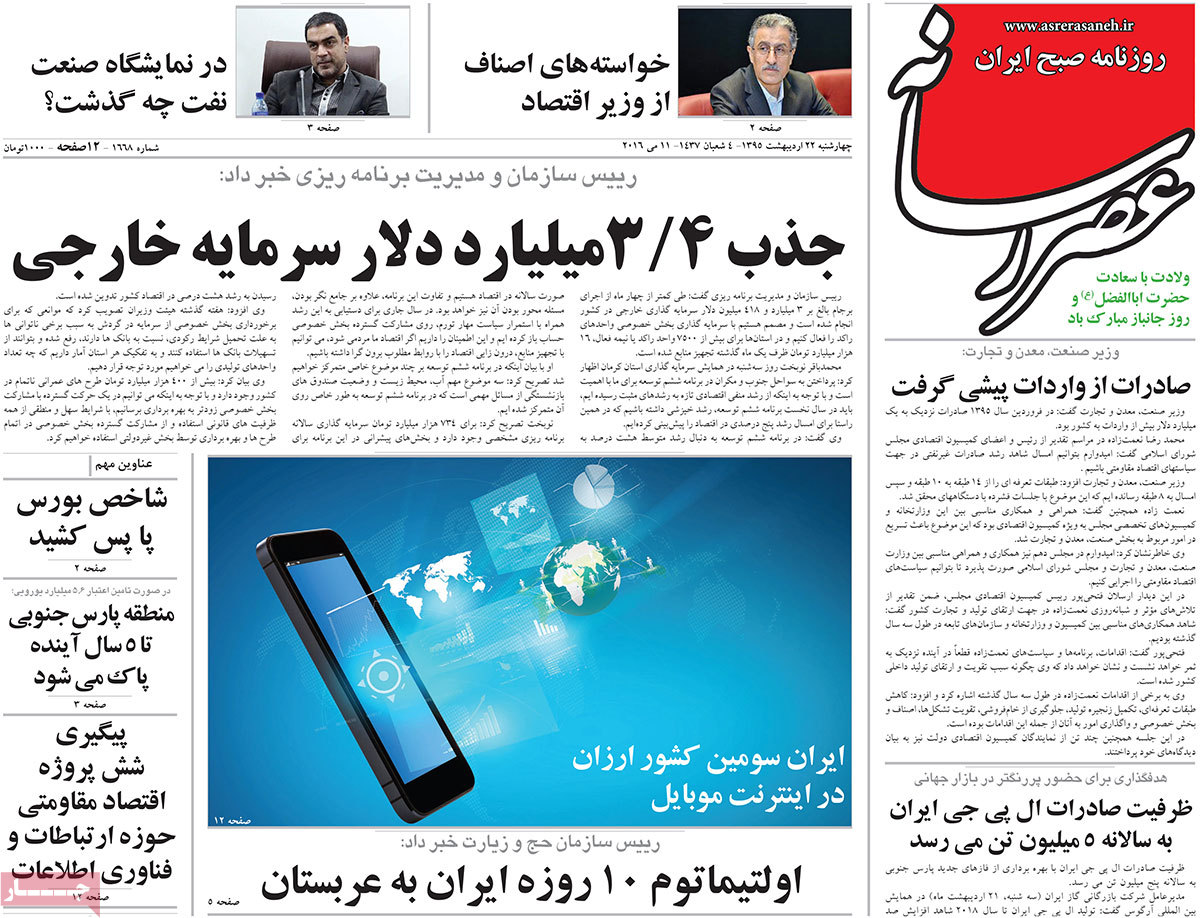 1- Ahmadinejad Does Not Deserve to Return: MP 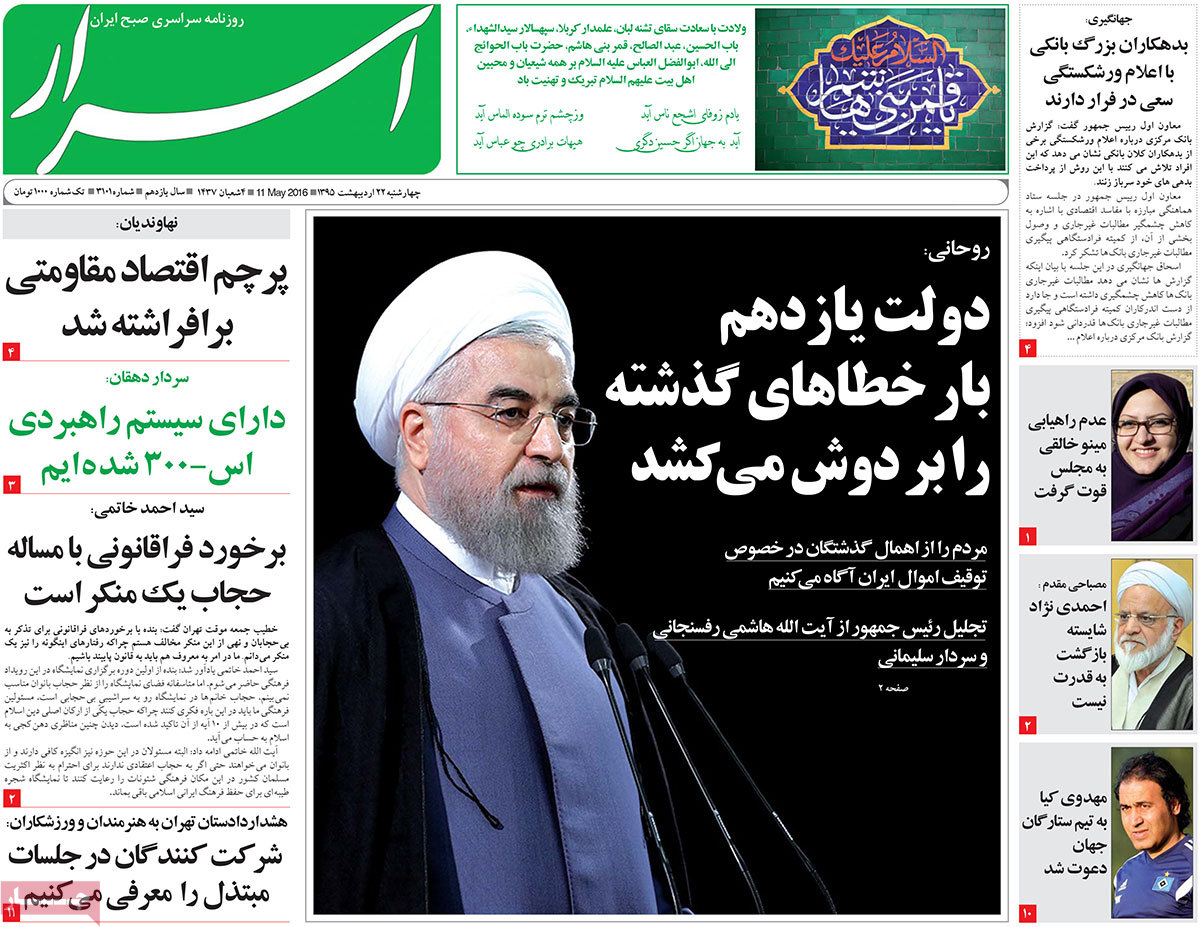 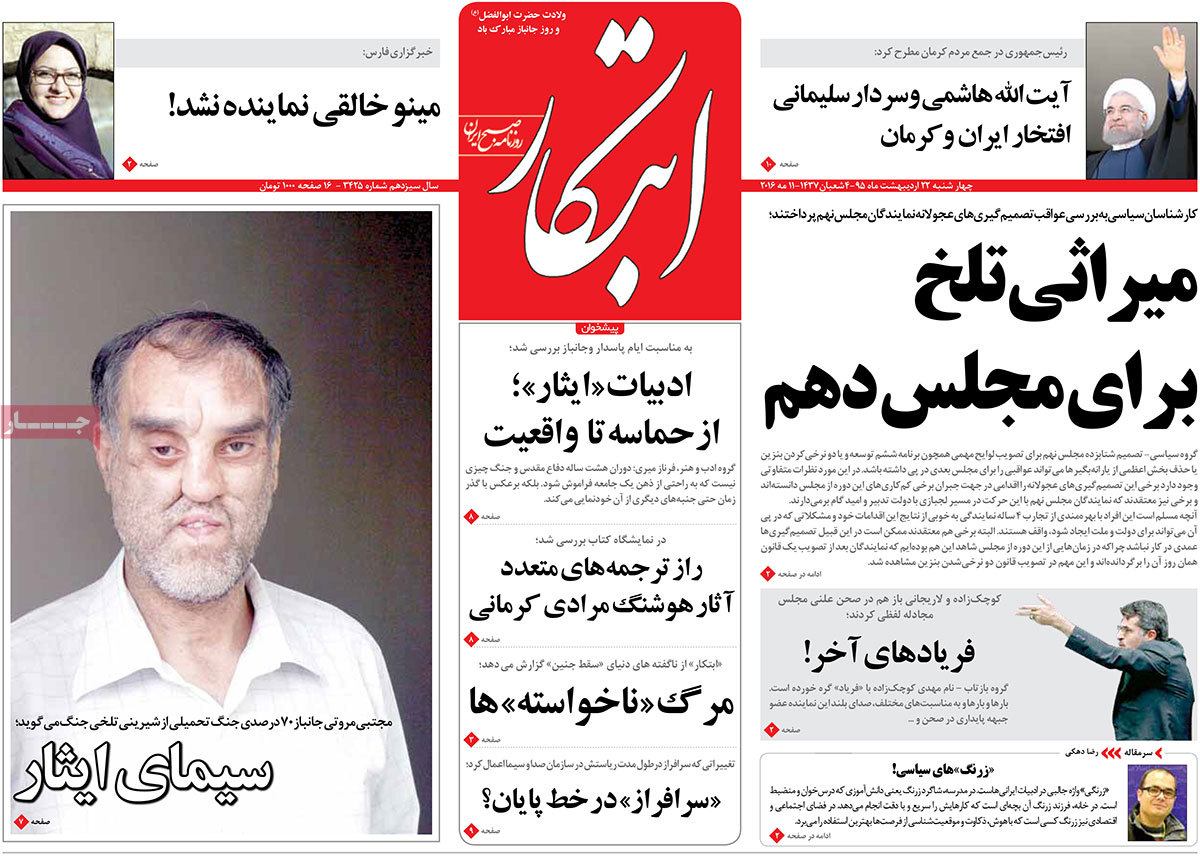 1- Worrying Statistics of Increase in Age of Marriage in Iran 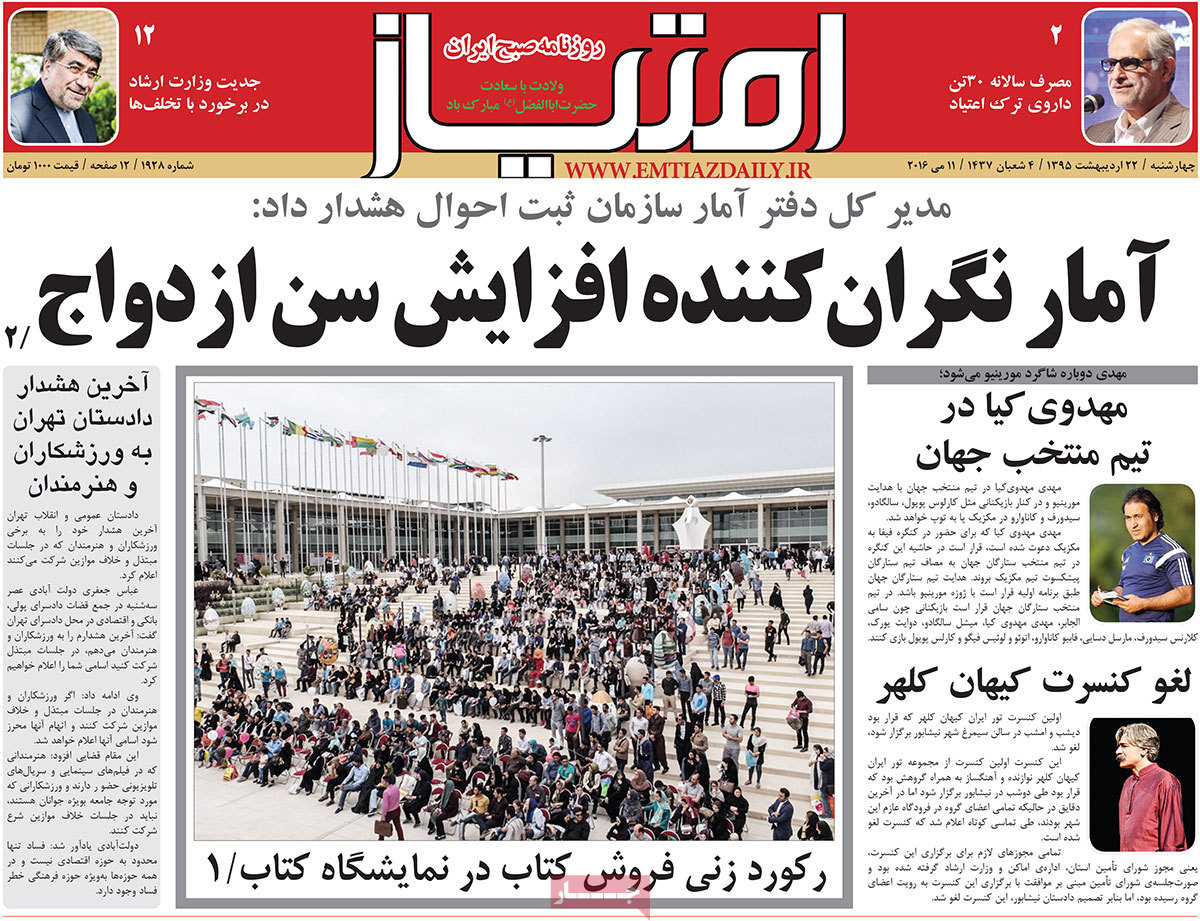 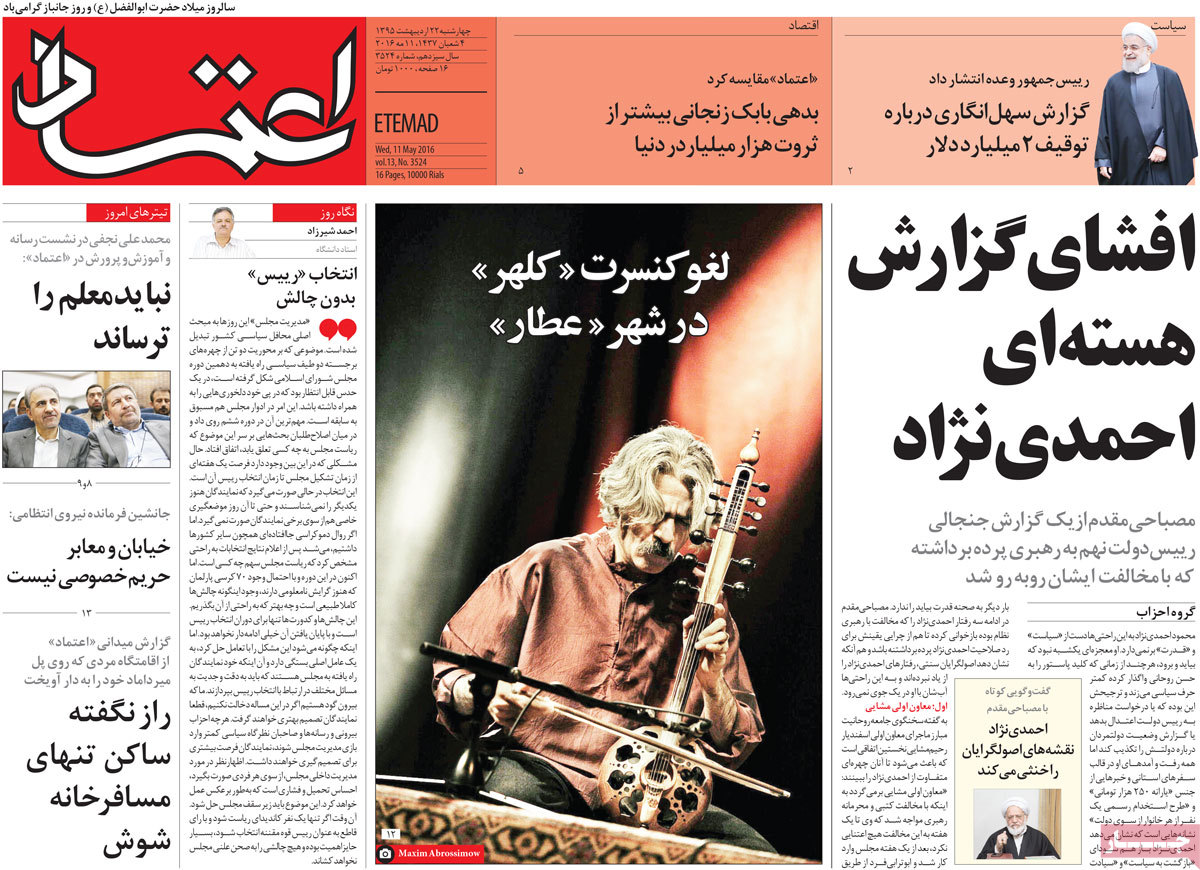 1- Iran to Sue US in Int’l Court: President Rouhani

4- “Friendship” Satellite Ready to Be Launched 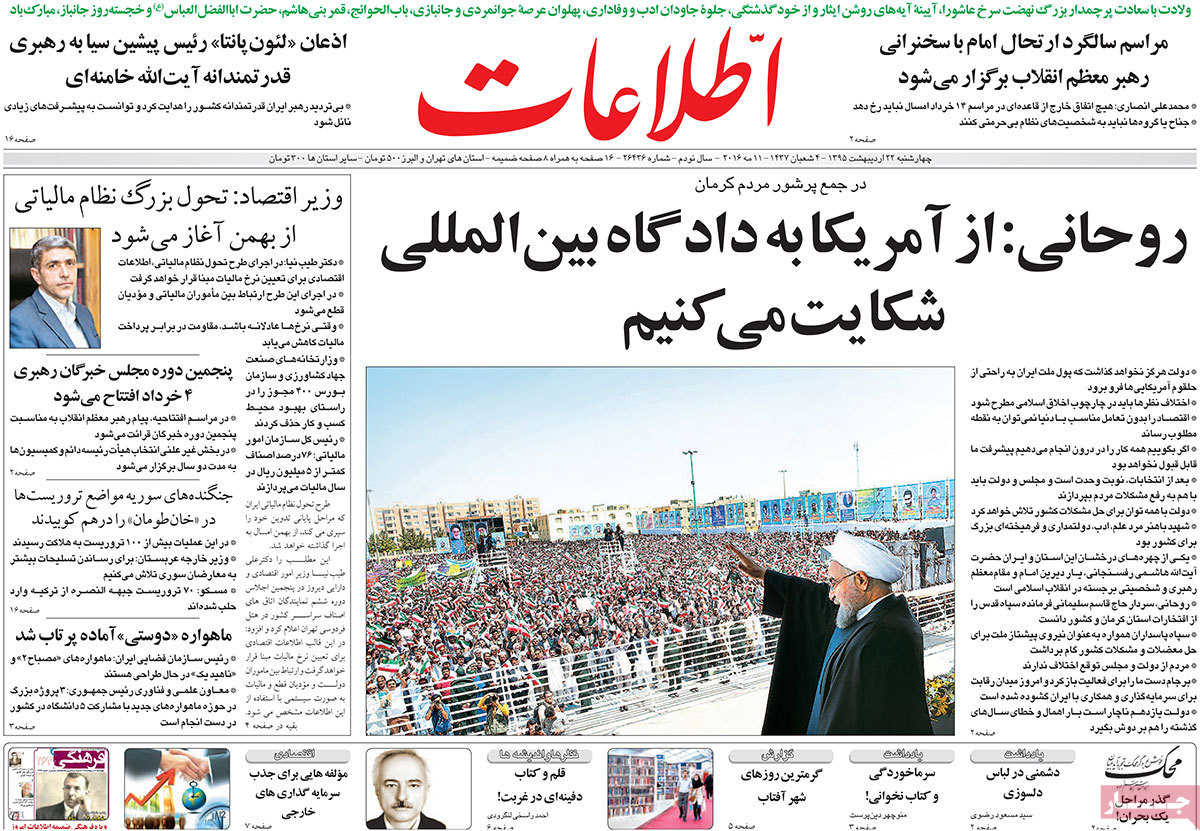 1- Hush! Listen to Neda’s Silence! [A 9-year-old girl in a village in Zanjan has been harassed by her teacher for several times. She finally informed her mother, and now the case is being pursued]

2- Iranians Have Become Kinder to Wildlife

3- President Rouhani Vows to Reclaim Iran’s Money from US: We’ll Spare No Effort in Restoring Our Rights 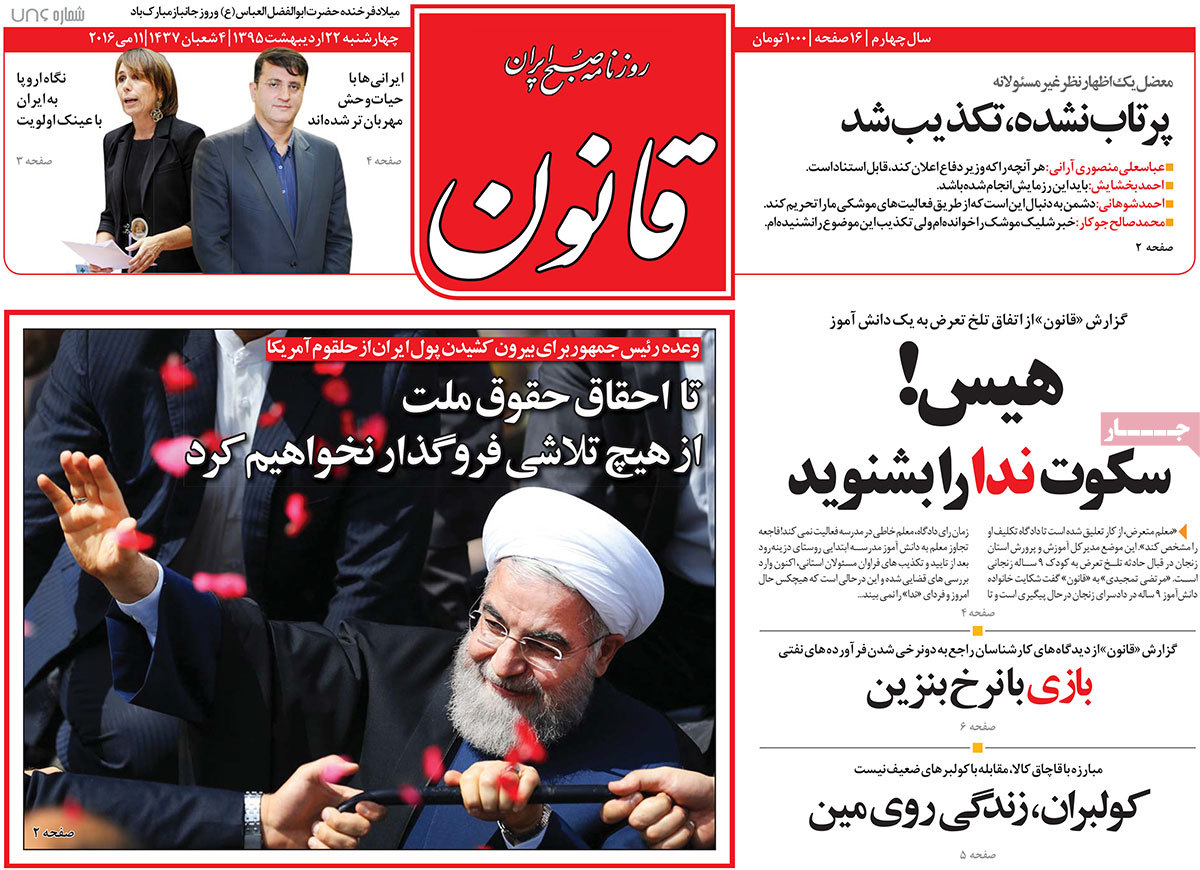 1- Iran-US Dispute in The Hague 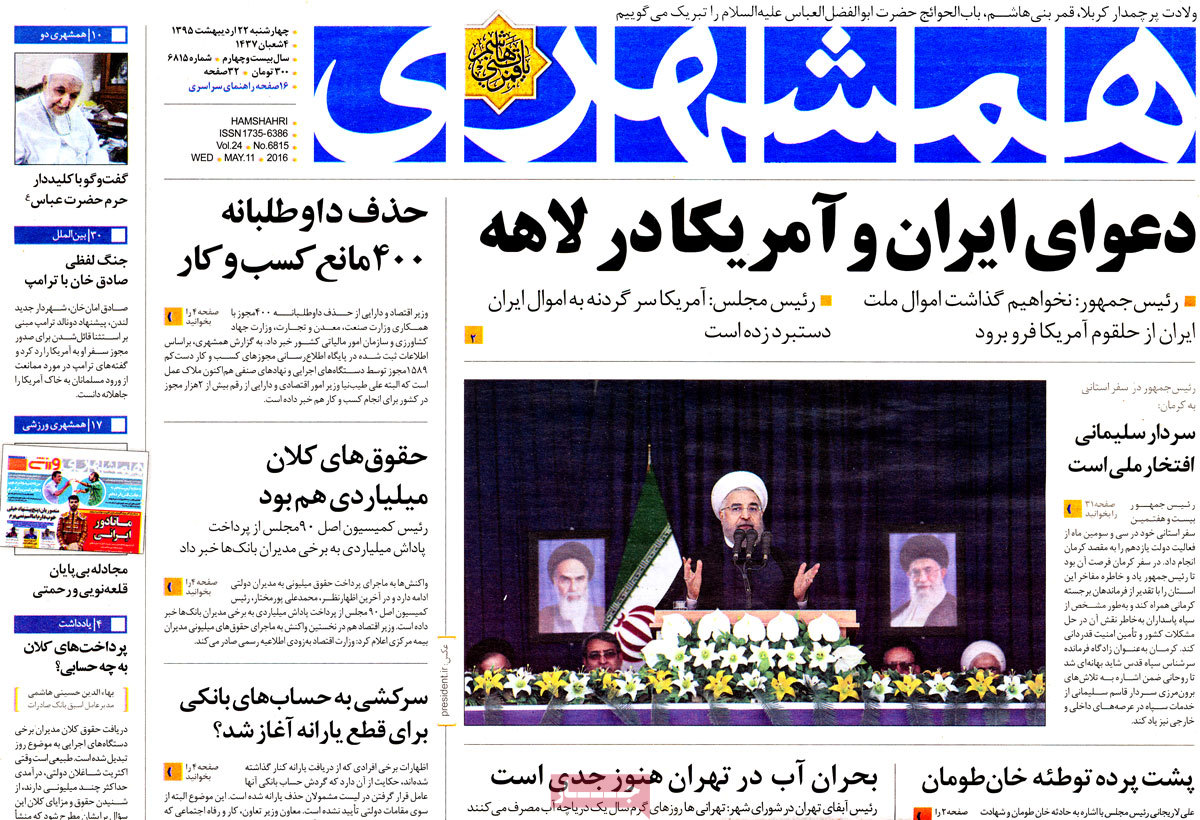 1- If US Makes Any Mistake [in Persian Gulf], Its Warships Will Be Sunk: IRGC Navy Commander 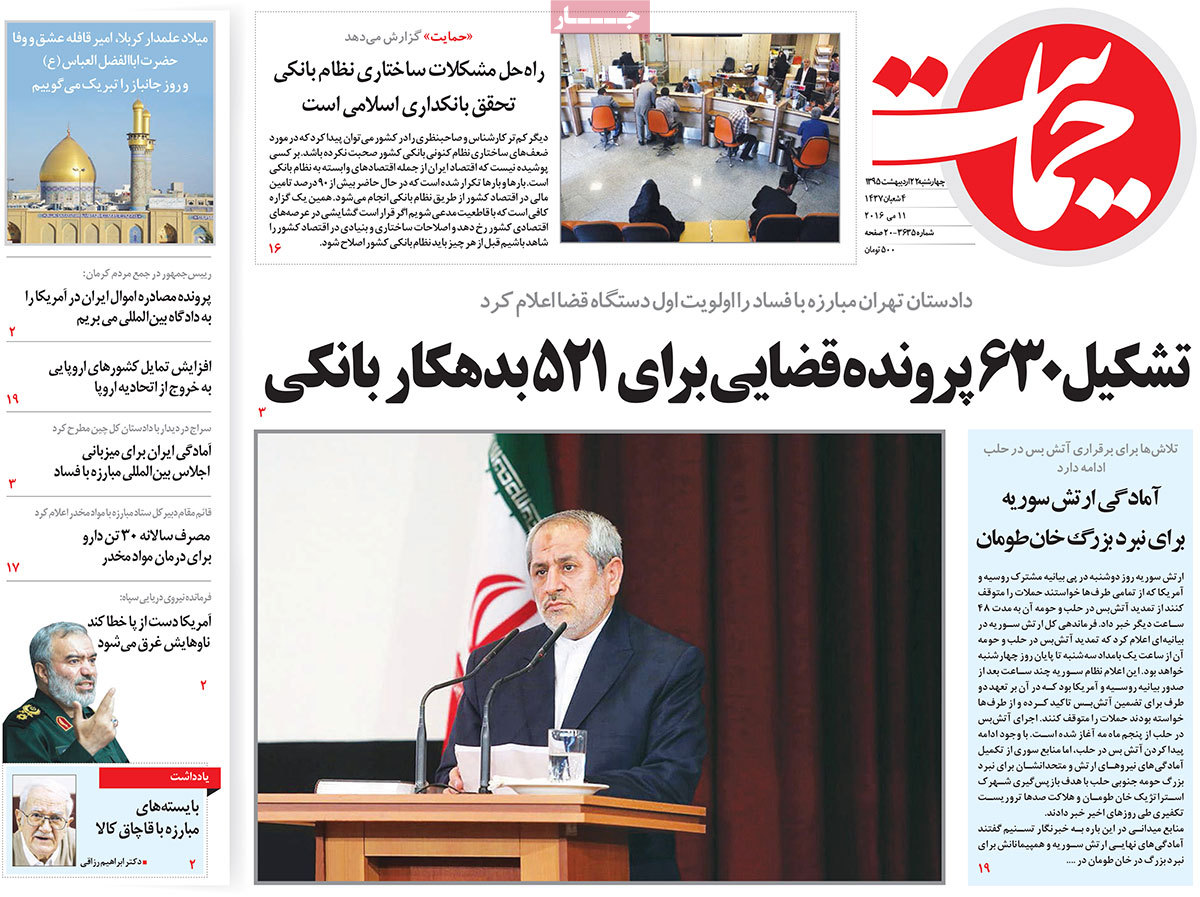 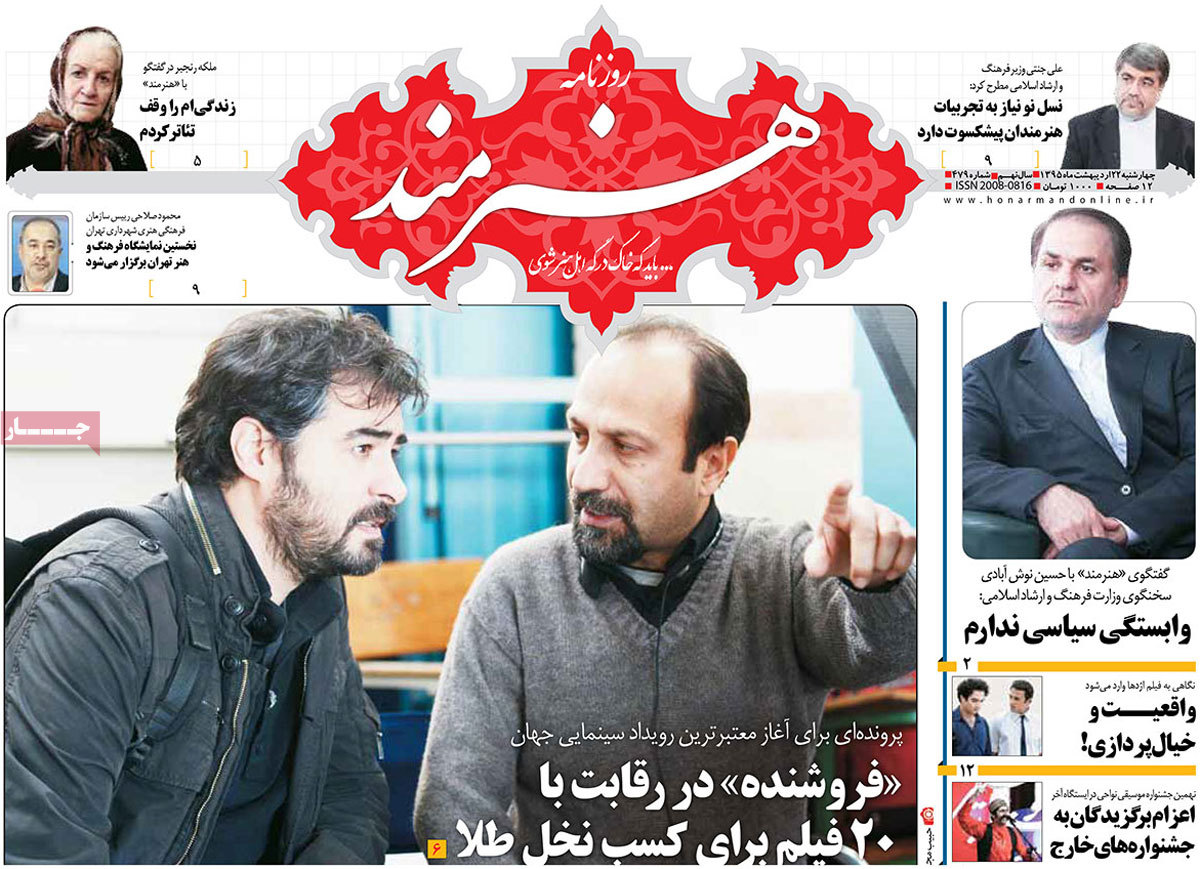 1- Test of Iran’s Legal Defence Capabilities: Will Iran Manage to Take Back the $2bn? 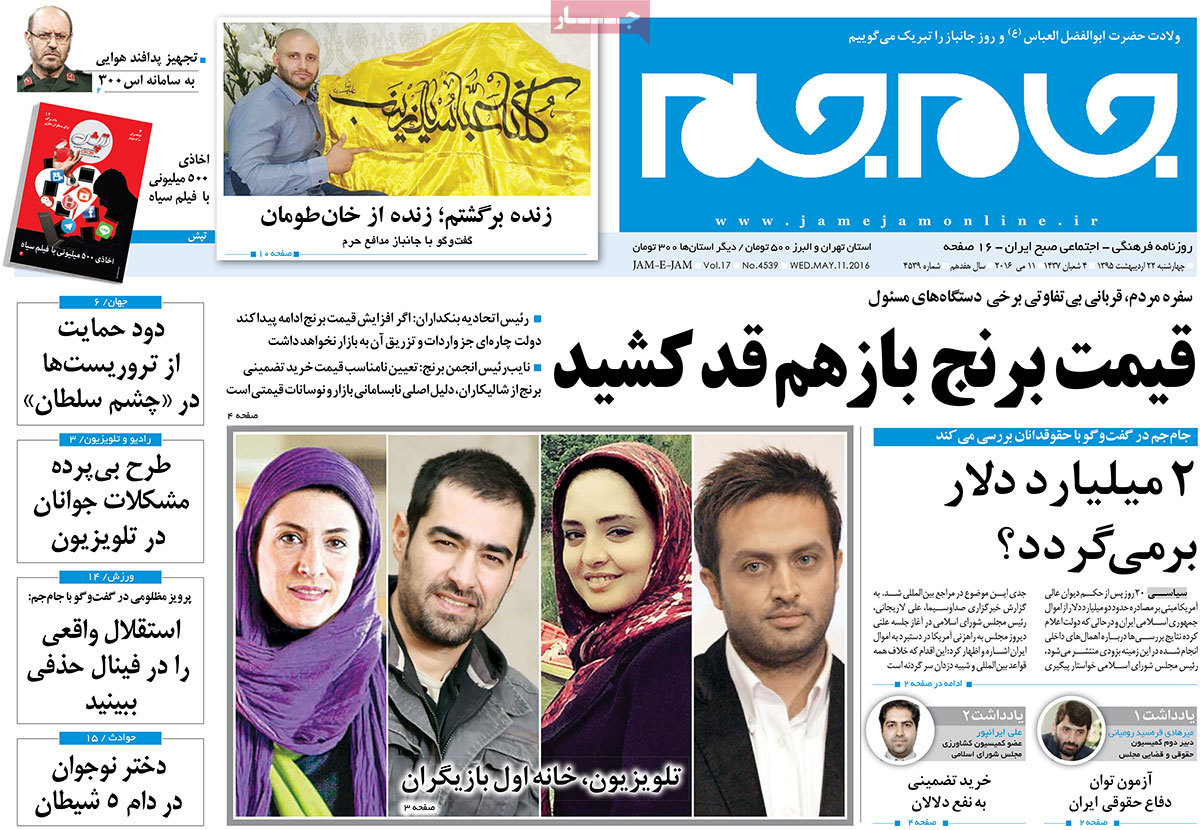 1- In Reaction to US Stonewalling: Cautious Implementation of JCPOA on Iran’s Agenda

5- IRGC, from Assaluyeh [southern Iranian town, home to giant gas fields] to Aleppo [where Iranian advisors are helping Syrian army in their fight against terrorism] 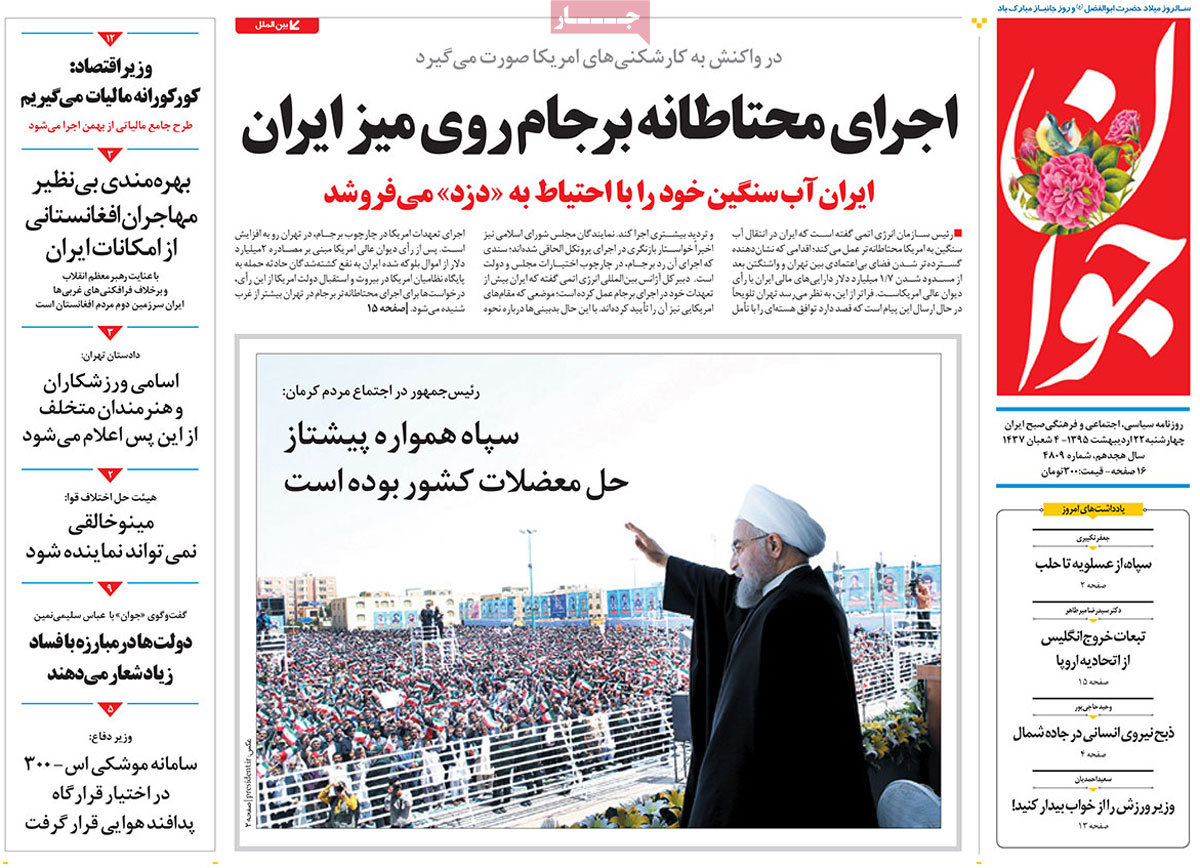 3- American Military to Stay in Yemen 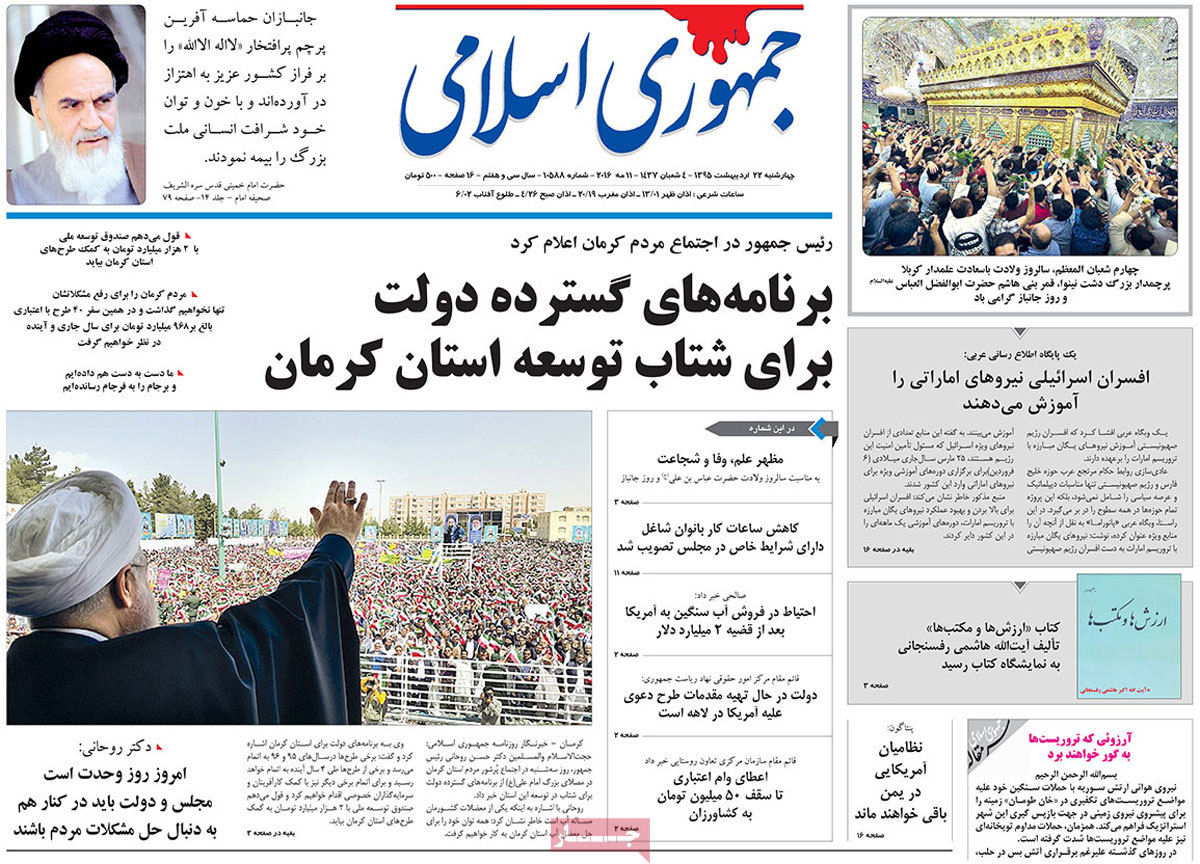 4- Retired US General: We Created ISIS to Fight Hezbollah 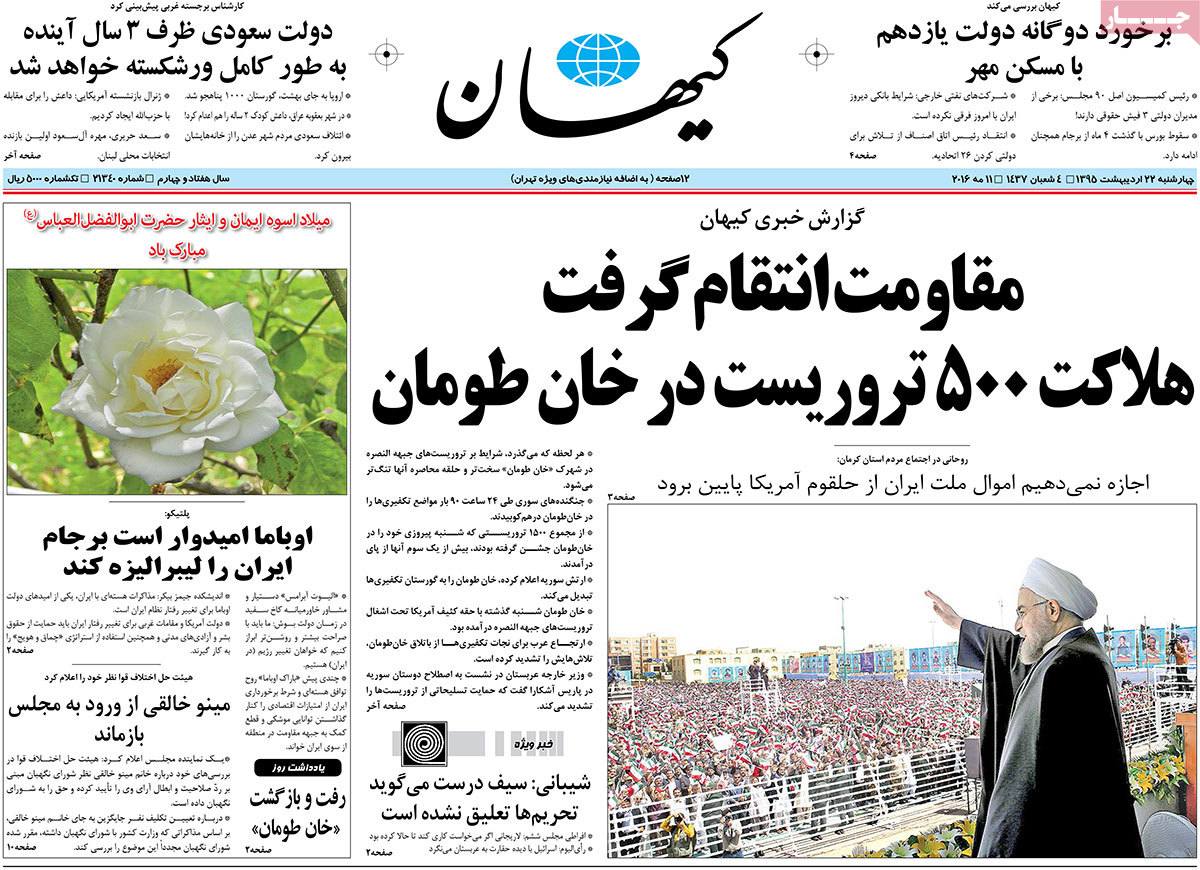 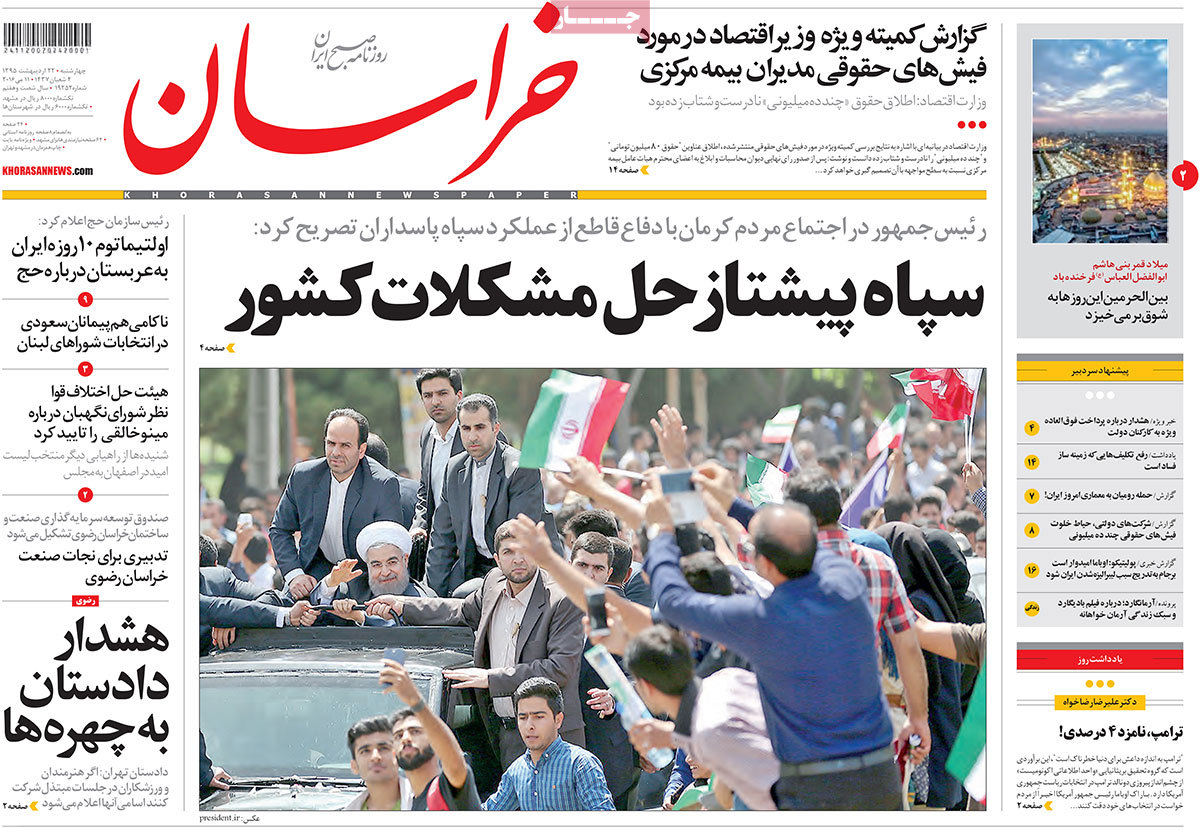 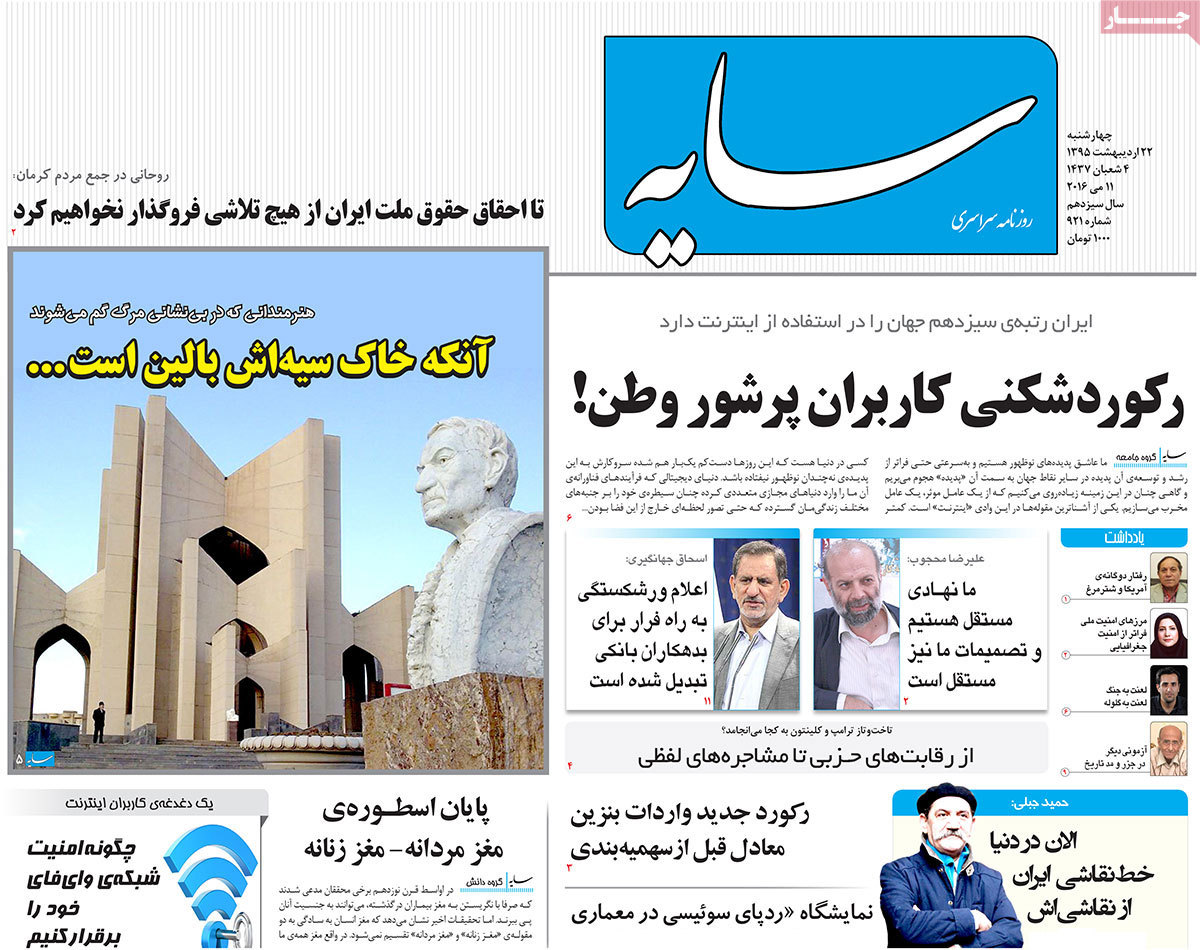 2- Double-Standard Attitudes of Brands towards Iranians and non-Iranians 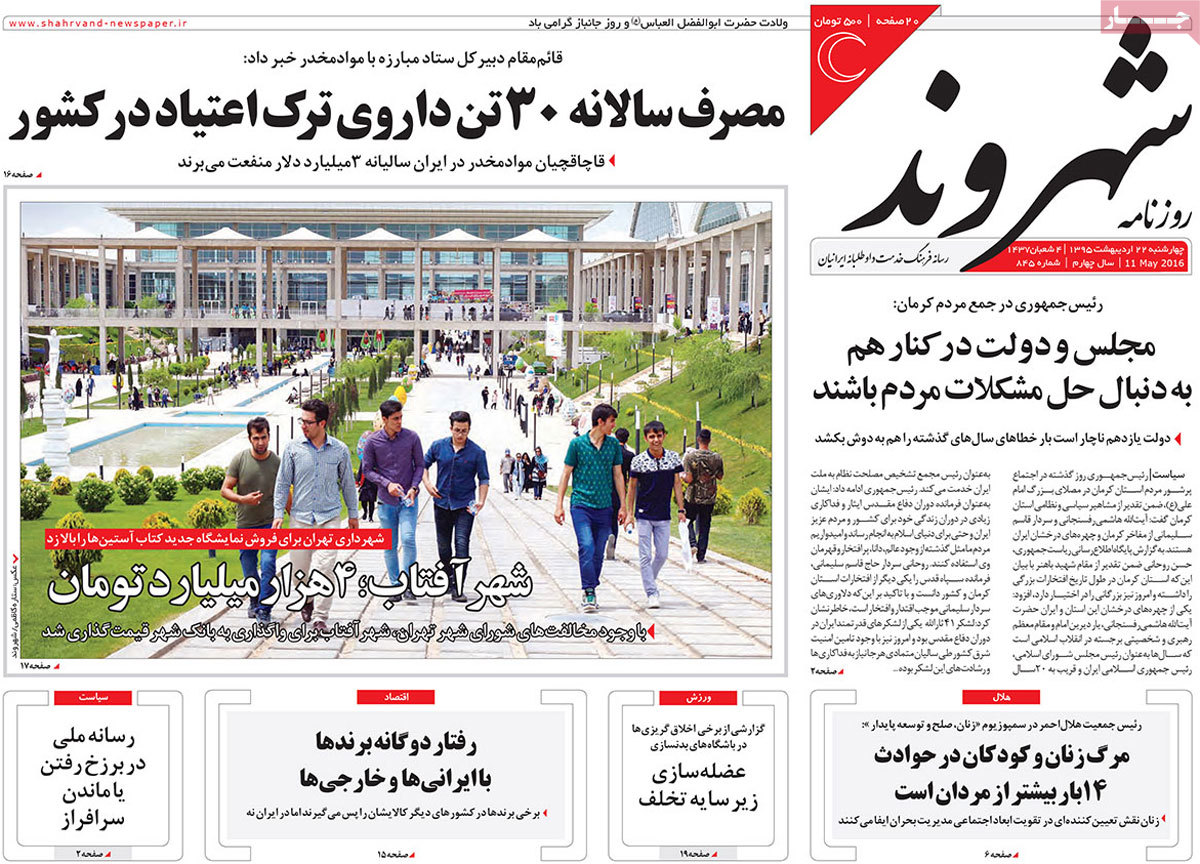 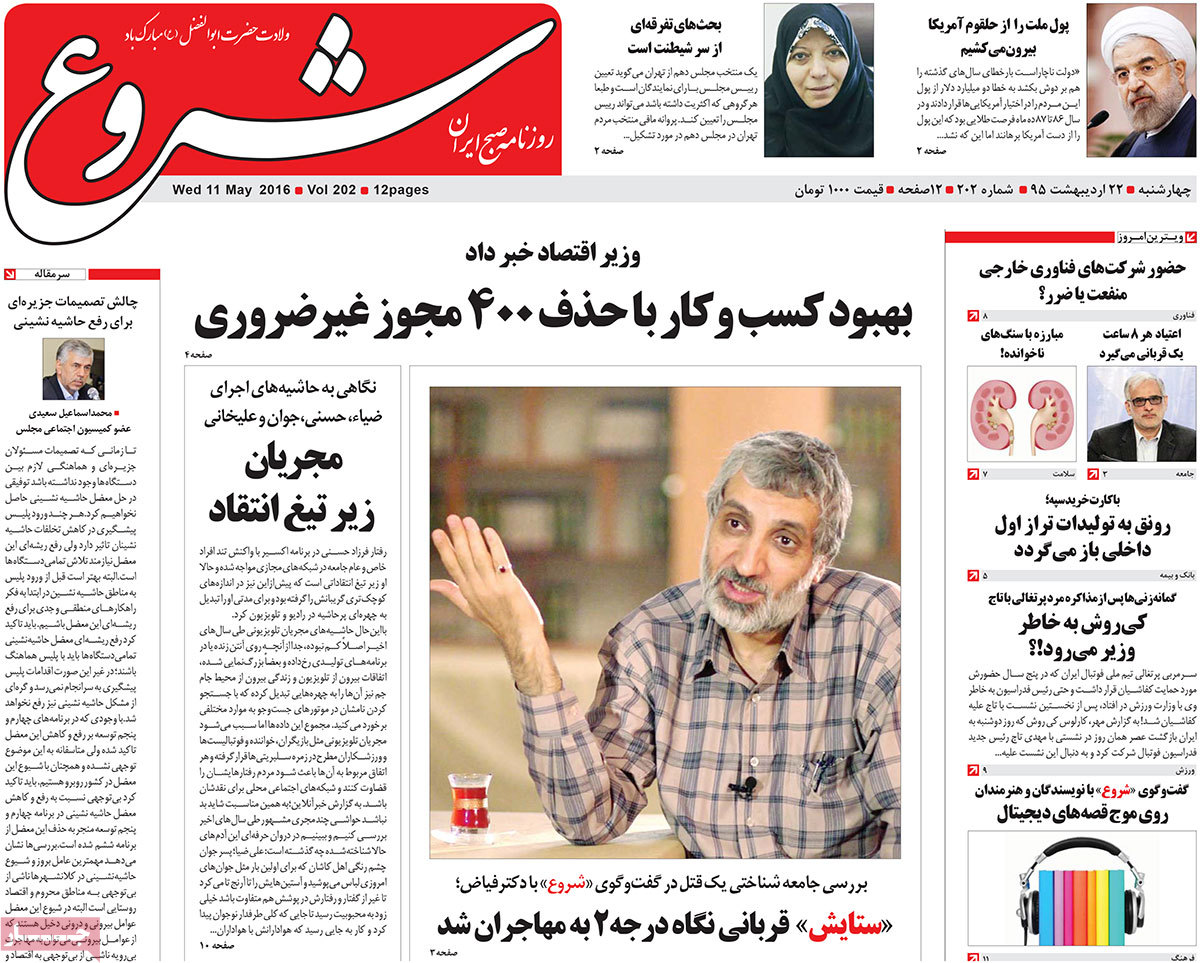