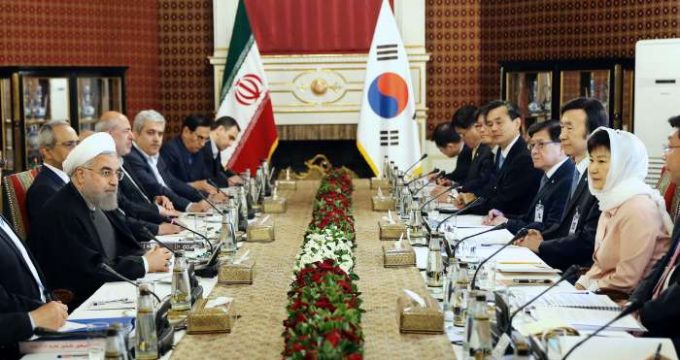 President Park Guen-hye paid a three-day state visit to Iran from May 1 to May 3. President Park’s tight schedule in Iran included a summit with Iranian President Hassan Rouhani as well as economic and cultural events. Her efforts were focused on creating a platform for Korea and Iran to make a leap forward going beyond the restoration of somewhat estranged bilateral ties caused by international sanctions against Iran.

At their summit, the president and Iranian President Rouhani adopted the joint statement on the Comprehensive Partnership Between the Islamic Republic of Iran and the Republic of Korea, reconfirming their commitment to the Nuclear Non-Proliferation Treaty and denuclearization and reaching a consensus on the principle of peaceful unification of the Korean Peninsula.

On the economic front, a total of 66 MOUs, including those that could lead to deals worth about 42 trillion won, or US$37.1 billion, were signed, the largest-ever achievement in economic diplomacy. An economic delegation consisting of 236 business leaders accompanied the president on her state visit, which laid a viable foundation for Korean businesses to advance to the Iranian market, a critical pillar to generate a second Middle East boom, ahead of their competitors. 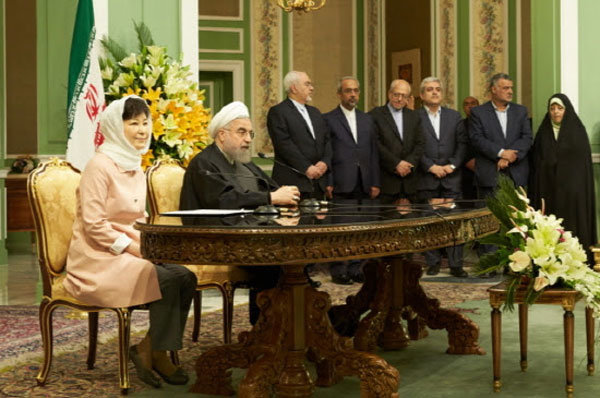 President Park and President Rouhani adopted the joint statement on the Comprehensive Partnership between the Islamic Republic of Iran and the Republic of Korea after their summit meeting in Tehran on May 2.

It was the first joint statement adopted since the two countries established diplomatic relations in 1962. The statement is evaluated as an important milestone in promoting Korea-Iran cooperation by restoring bilateral relations that became somewhat estranged during the period of international sanctions and by outlining goals and a roadmap for enhancing collaboration in a wide range of areas, including the economy, culture, education and tourism.

In the joint statement, the two presidents endorsed, among other things, the goal of building a nuclear-free world and reconfirmed their commitment to the Nuclear Non-Proliferation Treaty and denuclearization, expressing support for endeavors to that end.

In addition, the two sides expressed a shared understanding that nuclear development could never promote security and emphasized that peace and stability on the Korean Peninsula had to be maintained. Also included in the joint statement was Iran’s support for the Korean people’s aspirations for peaceful unification of the peninsula.

On top of that, the joint statement included the holding of annual foreign ministers’ meetings and joint economic committee meetings, concerted efforts to expand bilateral trade, the promotion of financial cooperation, the designation of 2017 as the Year of Korea-Iran Cultural Exchanges and the strengthening of judicial cooperation. 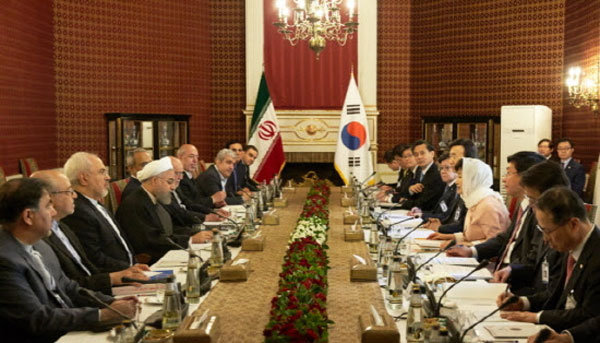 At their summit on May 2, President Park and President Rouhani saw eye-to-eye on the necessity of restoring the trade volume between the two countries, which had sharply contracted following economic sanctions imposed against Iran.

President Park began by noting the need to rebuild bilateral trade which had dwindled to nearly one-third the previous level. In response, Rouhani proposed that the two nations work together to increase trade to reach more than US$30 billion within five years. He also called for Korean businesses to participate in the country’s infrastructure construction projects.

President Park said Korea had come up with a financial package worth US$25 billion for joint infrastructure projects in Iran, the largest amount Korea has ever presented to another country, for which President Rouhani expressed deep appreciation.

In addition, President Park proposed further expanding cooperation to cover healthcare, information and communications technology (ICT) and new energy industries. In reply, President Rouhani expressed the hope that the two countries would be able to work together in such areas as electric vehicles, agricultural machinery, garbage disposals and a sewage treatment system. 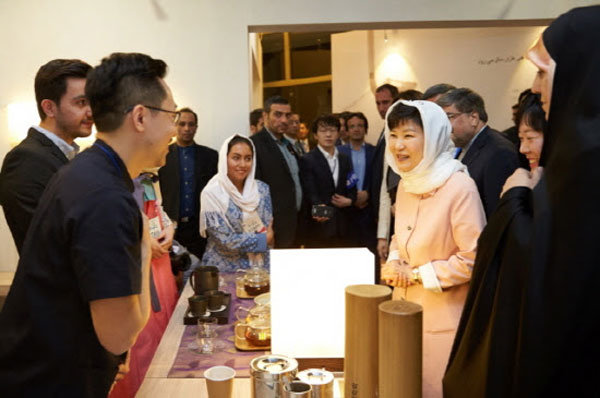 President Park attended a Korea-Iran joint cultural performance and, following that, a K-culture exhibition on May 3.

The Korea-Iran joint cultural performance was greeted with enthusiastic responses from a 1,600-strong audience. It was comprised of a joint concert between the Contemporary Gugak Orchestra of Korea’s National Gugak Center and Iran’s National Orchestra playing an “Arirang Medley” and “Avicenna” as well as demonstrations of Korea’s taekwondo and Iran’s traditional martial arts of zoorkhaneh, which was inscribed by UNESCO on the Representative List of the Intangible Cultural Heritage of Humanity in 2010.

At the end of the performance, President Park delivered remarks thanking all the performers and said that the friendship between Koreans and Iranians would become solid when invaluable bonds forged through culture between the two countries continue to develop.

After stopping by the kimchi exhibition, President Park said she looked forward to enhanced exchanges in foods between the two nations. The president expressed the hope that the exhibition, this time, would serve as an opportunity to introduce an increasing number of Korean food to Iran and help many Korean restaurants offering a wide choice of dishes to commence business in Iran.

Visiting a traditional Korean medicine experience zone, President Park said she hoped that efforts would be made to promote Korea’s advanced medical services throughout the Middle East. In the hanji experience zone, she tried her hand at making hanji plates along with Iranian students.

Over 3,000 visitors looked around the K-culture exhibits in only one day. Even when President Park left the venue after observing the displays, several hundred people remained and went in and out of the exhibition halls, showing great interest. 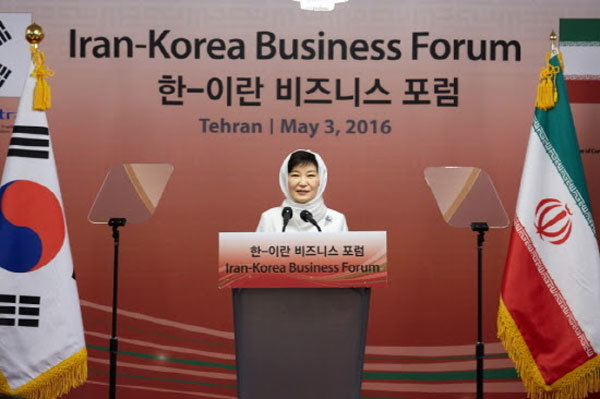 Together with the largest-ever business delegation traveling with her, President Park attended the Korea-Iran Business Forum held in Tehran on May 3. In her congratulatory remarks to the forum, she proposed measures to expand bilateral economic cooperation with the lifting of economic sanctions against Iran as a catalyst.

President Park began by saying that she was pleased at the opening of the business forum in Tehran where the historic culture of the Silk Road is still vibrant. She went on to say that ever since the era of Ancient Persia and the Silla Kingdom until today, Iran and Korea have built up special relations based on mutual trust and friendship.

Next, President Park emphasized the need to revitalize trade and diversify cooperation to encompass investment and construction of such infrastructure projects as railways, airports and water management and energy facilities as well as various other sectors, including healthcare, medical services, culture and information and communications technology.

The president went on to say that the Korean government would support speedy customs clearance of imports and exports on the strength of the agreement on mutual customs service assistance between the two countries’ customs service authorities, which was signed on the occasion of her state visit. The president also expressed the hope that investments between the two nations would resume in earnest by further bolstering cooperation through the exchange of relevant information, among other things, on the basis of the MOU between KOTRA and the Organization For Investment, Economic and Technical Assistance Of Iran (OIETAI).

Finally, President Park said that the peoples of the two nations have made a stronger leap forward every time they faced hardship. The president stressed that though global economic growth continues to be slow, the business people of the two nations would be able to demonstrate their potential and achieve new takeoffs.

This event was jointly organized by the Korea International Trade Association (KITA) and the Iran Chamber of Commerce, Industries and Mines (ICCIM). Present at the business forum were 400 people, including a 230-strong Korean business delegation, 170 Iranian business leaders and the Iranian Minister of Industry, Mining and Trade.

President meets with members of the Korean community in Iran 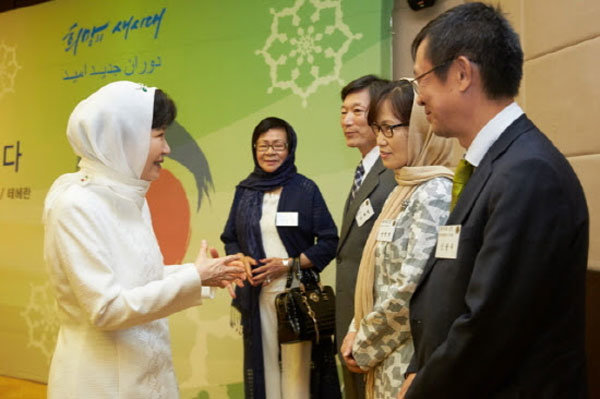 President Park first noted that the Korean community in Iran, though small, has nurtured strong bonds through various annual events such as a sports day and a K-Pop contest. She said she was proud and grateful to them for demonstrating their pride and identity as Koreans and helping elevate Korea’s prestige in Iran.

President Park underscored the fact that her state visit, this time, would help secure momentum for furthering bilateral ties and become a new milestone in enhancing mutually beneficial, substantive cooperation, including through increased advancement of Korean businesses to Iran. She asked the Korean community to continue its role as a bridge for the sake of promoting friendship and exchanges between the two nations.

Mentioning various challenging factors at home and abroad such as the security threat posed by North Korea and the global economic downturn, President Park said it would be possible to overcome any hardship if we revive the spirit the nation demonstrated when it realized the Middle East boom. The president emphatically said that unity, creative endeavors and a challenging spirit would constitute a vigorous driving force in ushering in a brighter future.

President Park continued to say that she would support the development of the Korean community in Iran in line with the increase of bilateral exchanges and cooperation and make all-out efforts, including the offering of customized consular services, in a bid to resolve difficulties and improve conveniences.

Now 330 Koreans, including resident employees working for construction or trading businesses and entrepreneurs, reside in Iran. Eighteen representatives of the Korean community took part in the meeting.